Love them or loathe them, Brazilian telenovelas are one of Latin America’s biggest marketing opportunities.

Love them or loathe them, Brazilian telenovelas are one of Latin America’s biggest marketing opportunities.

SÃO PAULO, Brazil — Something unusual happened at São Paulo Fashion Week earlier this year. Well-known television stars, such as Reynaldo Gianecchini and Marieta Severo, sat front row at the catwalk shows like so many actors have done before and since. But, throughout the shows, the usually measured celebrities had the unmistakable air of aloof and imperious fashion insiders. They were so out of character that there was a buzz about it. No one knew what was going on.

“At that point, the details couldn’t be revealed,” explains Dudu Bertholini, an industry veteran who presented his own label Neon for over a decade at Brazil’s premiere fashion week. “Everyone was trying to act like it was just an ordinary day in fashion but, in fact, we were covertly recording the upcoming soap opera Verdades Secretas.”

Indeed, a few days later, one of Brazil’s leading newspapers confirmed that a new telenovela for Rede Globo, one of the largest TV networks in the world, was being recorded during São Paulo Fashion Week. The actors had been acting strangely because they were in character.

Launched in June, Verdades Secretas, which translates roughly as ‘The Secret Truths,’ was a national hit. The on-camera style of actresses Camila Queiroz and Grazi Massafera — much of which revolved around a rock boho vibe — also proved to be favourable with fashion consumers. “I wish we, as designers, could influence Brazilian fashion as much as the soap opera stars do. Their reach is outstanding,” says Bertholini, a wardrobe consultant for Verdades Secretas.

The fashion industry is still comparatively young in Brazil. While São Paulo Fashion Week celebrated its 20th anniversary this month, TV soap operas have been a powerful driving force in fashion over the past 50 years. And unlike the niche nature of fashion week, soap operas reach across the length and breadth of this highly stratified market of 200 million people.

“Street style — the way women choose a silhouette or fix their nails — that comes much more from television than what happens on the runways or in fashion magazines now”, said Bertholini.

Rede Globo runs three main soap operas simultaneously, six nights per week, with each show lasting between five and ten months. The main one, considered prime time viewing, is broadcast at 9pm and is the most important in terms of commercial value and cultural commentary. 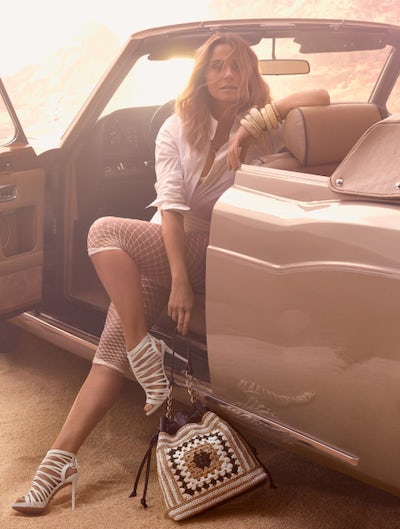 The lead character for the network’s latest prime time series A Regra do Jogo (‘Rule of the Game’) is Athena, played by actress Giovanna Antonelli, whose wardrobe — consisting of Anthony Vaccarello cut-out dresses and Chanel handbags — is selected by Yasmine Sterea, one of Brazilian Vogue’s in-house stylists. “Athena likes to feel powerful and wears important labels. There’s a fashionista personality within her,” Sterea revealed in a feature in Vogue Brazil.

It is no coincidence that the same actress fronts the Spring/Summer 2016 campaign for Arezzo, the Brazilian footwear brand owned by Alexandre Birman, where she is also launching a branded capsule collection.

“When I started using soap opera actresses as models for Arezzo, Rede Globo had 70 percent of the television market share. Everyone knew what the TV stars were wearing,” says art director Giovanni Bianco, who has cast the lead character from the most popular soap operas, as the face of Arezzo for over the past decade.

“Products that appear in celebrity campaigns usually have a 30 percent commercial spin over other products in the collections,” adds Birman, chief executive of Arezzo. The company reported a net income of 285 million reais (about $73.4 million) for the second quarter of 2015, a 12.5 percent growth on the same period last year.

While Birman may be known internationally, having launched footwear brand Schutz as well as his eponymous high-end shoe brand stocked by Nordstrom and Saks Fifth Avenue, he is a true mogul in Brazil. Birman’s family empire has been dominating competitors for more than forty years and is the largest footwear firm in the country, churning out over nine million pairs of shoes each year.

"This [formula] has always been so powerful in Brazil. We’re not only talking about São Paulo. Soap operas are the main cultural vehicles across every single region in the country,” says Augusto Mariotti, creative director of Luminosidade, the company that owns São Paulo Fashion Week.

Featuring a constellation of emblematic female characters, telenovelas have been a powerful — and often polarising — force on womenswear in Brazil. "I always say that costume is the skin of the character,” says Gogoia Sampaio, a costume designer for Rede Globo. “The character’s impact can be felt at retail in the first few weeks of [launching] a new soap opera. Well-crafted characters are often real game-changers for fashion here [and] retailers quickly bring the new soap’s style trends to offer,” says Gogoia.

In 2012, a leading actress on the soap opera Avenida Brasil regularly carried a Michael Kors white monogram tote bag. Soon after, long lines of Brazilians were spotted at the designer’s boutiques in Miami and Orlando, and only a few months after the show’s final episode, Kors opened his first bricks-and-mortar store in Rio de Janeiro.

“It’s a two-way street for international brands. On the one hand, they get known fast, but on the other they get popularised fast and extensively copied,” says Bertholini. Overexposure and the risk of becoming a fad are just two of the dangers luxury brands face when considering a collaboration with telenovelas.

Rede Globo’s revenue was 11.5 billion reais (approximately $2.9 billion) in 2013. This figure represents more than twice that of competing Brazilian television networks combined, according to a report published by UOL, one of the country’s leading online news agencies. 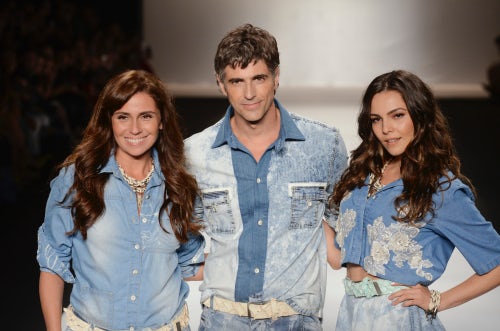 "The [telenovela] genre in Brazil represents 20 percent of advertising budget. This is very solid. The major sectors that invest in television dramas are… retail, personal hygiene and beauty,” says Fabio Wajngarten, owner of FW Comunicação, a media research company focused on the business of television.

Brazil’s economy has been shaky since president Dilma Rousseff took power in 2011, with mass political demonstrations erupting across Brazilian society on several occasions. According to the World Bank, Brazil’s economy grew just 0.1 percent last year and most forecasts are not bright. It is estimated that investors in companies listed on Brazil's main stock market have lost $1 trillion in value in the last four years.

Nevertheless, Brazilians are the biggest spenders of luxury goods in Latin America, and according to analysts, the country’s apparel market is worth a staggering $54 billion.

In the midst of the country’s political and economic crises, ratings have fallen for Rede Globo’s prime time titles, while competitors Rede Record and SBT have a few shows on the rise. But according to Wajngarten, advertising has not been affected so far. “A good telenovela always has good advertisers," he says.

"People just go online now to watch [their favourite] soap operas. Everyone knows the characters and their style,” said Luminosidade’s Mariotti. Evidence of this can be seen from the heightened interest in actress Giovanna Antonelli, the star of A Regra do Jogo. Over the past month, Antonelli was the most mentioned celebrity on the Internet in Brazil, according to a PR Newswire research.

Most market observers agree that telenovelas will likely retain their advertising value and impact as a marketing influencer for fashion brands in the years to come. One reason, in particular, is that they represent a familiar mirror of Brazilian society and family life.

“The shows are a sample of life in Brazil from ‘Class A’ to ‘Class E’,” Wajngarten explains, referring to the socio-economic hierarchy used in Brazilian marketing demographics. “Brands interested in any share of the marketplace have excellent choices to communicate. In fact, there are several studies suggesting that soap operas even influence the long-term behaviour of Brazilians — for example, the variation in the birth rate and the number of divorces.”

Traditionally, telenovelas told their central story line around a very wealthy and powerful family, but many recent plots have changed dynamics and are moving deftly from the sequestered circle of luxurious neighbourhoods into the favelas and many places in between. This change reflects a growing and powerful new consumer base: the Brazilian middle class.

Though analysts differ in providing a precise income bracket, most now agree that they make up more than half the country’s population, which amounts to over 100 million people. "Advertisers understand that within these communities there is a very large new consumer market, so communication must be directed towards them,” said Wajngarten.

By tapping the Brazilian telenovela as a marketing vehicle to achieve growth through newly aspirational customers, fashion and luxury brands could leverage new sales and increase brand awareness. But concerns about diluting brand equity are still very real for the more exclusive brands. Pairing prestige products with what many consider to be a lowbrow art form may indeed be a step too far for some. However, if the past few years have proved anything, it is that Brazilian consumers respond more favourably than most when their favourite brands appeal to popular icons of the telenovela.