LONDON, United Kingdom — “It’s a maths equation,” says Christopher Simmonds. “You take a peacock, a mall in Berlin and then loads of kids and a skateboard. Put it all together and see what you get.”

What you get is Gucci’s Spring/Summer 2016 campaign. Simmonds, who has art directed every Gucci advertisement (both print and video) under the brand’s new creative director Alessandro Michele, is slouching in a black hoodie, a black hat pulled over his close-cropped auburn hair, in London’s Charlotte Street Hotel. He speaks softly and stares into the distance a lot. It’s difficult to imagine him grappling with two peacocks in a deserted German shopping centre in the middle of the night.

Simmonds' first Gucci campaign was Pre-Fall 2015, the first under Michele’s creative direction. The collection had originally been designed by former Gucci creative director Frida Giannini, but the campaign served as a key step in the biggest rebrand of a major fashion house in recent years: gone was Gucci’s glossy, sexualised aesthetic, and in its place, pale and interesting, pensive models, lounging around on threadbare sofas in a bedsit. 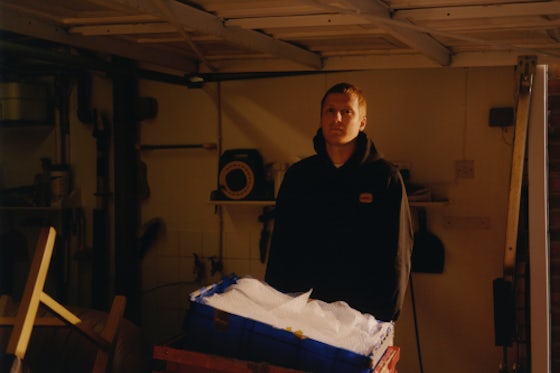 “Nobody really knew him and he came on the shoot and was super nice. He just allowed us to go there,” says Simmonds of Michele. For the following campaigns, he and photographer Glen Luchford went even further: “[Michele] sent us a document of what he wanted the new visual language to be about — it was very clear. We just translated that into a trip, where we were going all around the world. The idea was to have this thing that would run for seasons and seasons,” he says. “I think that when you need to rebrand something, you’ve just got to do the same thing over and over again untill people get the message. I think people get the message on Gucci now…”

In over a decade of fashion image-making, Simmonds has art directed campaigns for brands including JW Anderson, Alexander McQueen and Zara. On Simmonds’ watch, Azealia Banks has rapped for T by Alexander Wang; Hood By Air campaigns have featured models stood in piles of sand with their trousers round their ankles; and Nicki Minaj has posed as a plasticky Stepford Wife for Dazed and Confused magazine, where Simmonds was creative director from 2010 to 2015.

But now, he is scared. “The work system is just fucked,” he says.

A few years ago, a campaign was a page in a magazine. Now, he says, it’s also an Instagram asset; online advertising; a webpage takeover and a video; all edited with different colour profiles for mobile screens, and produced for twice as many collections per year. “Clients aren’t aware of the time that goes into that. The more assets they need, the more time it takes. The breaking point is going to come. There’s just not enough hours in the day.”

The breakneck speed of fashion is the industry’s hot topic of late. But while high-profile designer exits like Raf Simons leaving Dior have raised red flags, Simmonds says the pressure doesn’t just apply to designers. “Everybody is so overworked — all of the photographers, all of the stylists, all of us,” he says. “This so-called desire for new clothes all the time is just putting pressure on everybody and everything is just getting compressed. It’s going to snap at one point.”

One of Simmonds’ concerns is the impact this has on creativity. He favours working with photographers including Colin Dodgson (on campaigns for Hood By Air and Zara) and Jamie Hawkesworth (JW Anderson), whom he says are a minority in the industry, in that they work at their own pace, shooting and editing their own photos, often using film, and “rebelling against this sort of mass production of billions of assets.”

“I’m trying to react against it, but it’s so hard,” says Simmonds. “We did a shoot today and they want the images tomorrow. People don’t have time to digest things. When you deliver everything so fast, you don’t have time to sit with anything for a week and think, maybe this edit is better. The pace is just really intense.” 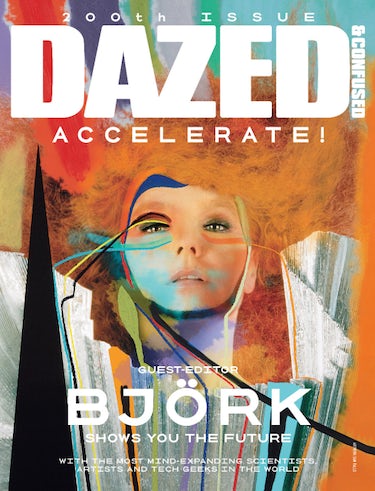 Bjork on the cover of Dazed and Confused magazine | Source: Courtesy

For five years, Simmonds was creative director of Dazed and Confused magazine, where he oversaw the magazine’s relaunch as a bimonthly title. “The best thing about working with Dazed was that there were no political allegiances,” he says. “We could work with whoever we wanted, whenever we wanted, for whatever purpose.” Under his direction, one cover featured Radiohead’s Thom Yorke clutching his face, eyes rolled back to the whites; for another, Simmonds commissioned Sam Falls, a fine artist who had never done a shoot, to photograph Björk.

However, commercial pressures crept in. “I guess it was one of the reasons why I left,” he says. “It just became more about the money. All independent magazines struggle to make money, and at a certain point you have to service the people that pay for the magazine to exist.”

Simmonds grew up in Birmingham, England, where he attended Camp Hill, a high-achieving grammar school that “put people into Oxford and Cambridge.” Ignoring the advice of his his teachers, he studied fashion promotion at Central Saint Martins, slogging it out as a magazine intern alongside his studies. “I wasn’t getting paid, but I’d go at 10 and we’d work until 2 o’clock in the morning, pretty much every night,” he recalls. “I thought, ‘I don’t want to take that forward into how I work with people.’”

After graduation, interning took its toll. “I was really broke, I was selling all my records,” he says. Then Simmonds landed a job with Martin Jacobs, an art director in London. “He was the nicest person I ever worked for,” he says. “I learned more there than anywhere else. He taught me about the process and how you conceptualise something and how you present things to the client. But then he also taught me how to deal with your staff. You need to build up the camaraderie — they’re not just slaves.”

Eight months into the job, Lane Crawford, a Chinese department store, came calling. With nothing more than a word-of-mouth recommendation and a copy of his final project from CSM, a men’s style magazine (which had sold out its run of 2,000 copies), they commissioned him to art direct their next campaign. Simmonds, then 25 years old, used the money to launch an art direction agency, Partner + Partner, with Greg Stogdon.

The role of an art director sits somewhere between that of an orchestra conductor and a politician. In theory, the art director “conducts” a team — photographers, designers, editors, stylists — to work in harmony, bringing everyone together to create a campaign that fits the client’s brief. In reality, it’s a little different. “I’m constantly putting out fires,” says Simmonds. Photographers ignore briefs (“I said, ‘You can do anything, just don’t shoot it black-and-white,” he recalls. But when the photos came back, they were black-and-white.); stylists and photographers refuse to work with one another for political reasons; and, on one occasion, a well-known brand gave his team creative freedom, approved the pictures, then pulled the campaign on the day it was supposed to come out. “A lot of it is about managing people’s expectations,” he says.

Simmonds has run his eponymous creative agency since 2009 (Partner + Partner closed after Greg Stogdon decamped to Burberry, where he is now senior vice president of creative media). But despite working with luxury brands in the leagues of Balenciaga and Stella McCartney, Simmonds balks at the idea of money being the motivator for his work. He and his team of five full-time staff “never think” about the commercial purpose of a campaign, and still take on editorial projects where, he says, “the wages aren’t great, but what you’re lacking in salary, you make up in creative freedom.”

“My name’s on the door,” he says, stressing that he doesn’t want his company to grow so big that he can’t be personally involved in every project. “Therefore it needs to have my touch on it.”

Unsurprisingly, a lot of brands ask Simmonds to do “that Gucci thing” for them. “I’d rather not do the projects,” he says. “If we pitch an idea, even if the client doesn’t take it, we can never use it again.”

Simmonds has no hard and fast rules about making a campaign — “Some clients give you total freedom, some clients are very controlling” — but insists “I never want to see the same idea twice.” He continues, “Some art directors, their work automatically looks the same. They can work for one client or another, and if you took the logo off, you wouldn’t be able to tell the difference… ”

Recent changes to the fashion calendar, with some brands moving to a schedule where they unveil their runway shows and advertisement campaigns all at the same time, could throw a spanner in the works for art directors. “When I see a show, that informs the creative on the ad campaign. If they pick a song, we might use that song in the video. The girls that walk in the show might be new faces and then we might cast them to be in the ad campaign. The set design, or the colour palette,” he says. “If we have to shoot everything in advance of the show, then a lot of that inspiration, for me, is going to be gone.”

“I’ve had a rant about it,” Simmonds concedes, with a shy smile. “But doing the job that I wanted to do as a kid, working with the best brands and the best people, it’s amazing.” And what about the fashion system? Can it be fixed? “I don’t have any answers as to how to improve it,” he says. “I guess we’ll just be guinea pigs for the next few seasons.”