The Italian luxury label is once again a fixture of the red carpet and the subject of gauzy magazine profiles. In the last few weeks, Greta Gerwig, Blake Lively, Lupita Nyong’o and even the Duchess of Cambridge have worn the brand during public appearances. And on Tuesday, first lady Melania Trump, a longtime supporter, sported a dark Dolce & Gabbana suit to President Donald Trump's State of the Union address.

Dolce & Gabbana’s many critics advocated to get the brand off the backs of A-listers in 2018, following a roughly six-month run where designers Domenico Dolce and Stefano Gabbana managed to insult the Japanese fashion industry, Selena Gomez and the people of China in rapid succession.

The label’s hourglass-making, richly ornate looks were largely absent from awards shows for about a year. Their sudden return marks a new chapter in one of fashion’s most enduring mysteries: why, no matter what Dolce & Gabbana’s controversial founders say or do, does the brand always come roaring back, seemingly none the worse for wear?

This time around, some industry insiders credit Lucio Di Rosa, who joined the brand at the start of 2020 as head of worldwide celebrities and VIP relations, a position he held at Versace for 15 years and Armani before that.

“Lucio is a beloved figure within the fashion industry,” said fashion writer Evan Ross Katz. “He has really strong connections with stylists and celebrities.” Katz, a writer for Garage, Paper and other titles, has been following the brand’s moves for some time. He recently posted footage of celebrity stylist Karla Welch denouncing the brand at a panel for BoF West in 2018, pointing out that Welch had styled her own clients in the label last month.

Welch did not respond to a request for comment. 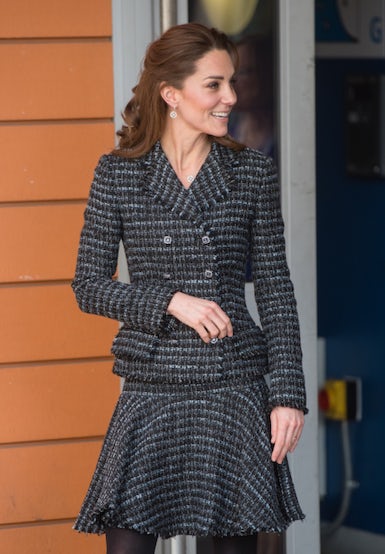 Others argue that Dolce & Gabbana never really went away. Revenue for the fiscal year ending in March 2019 was up 5 percent to €1.38 billion ($1.54 billion). That was despite being frozen out of China, the world’s second-biggest luxury market, for months after a November 2018 campaign video depicting a Chinese model struggling to eat Italian food with chopsticks sparked a boycott.

Those resilient sales are a sign that Dolce & Gabbana’s antagonism toward critics and disdain for political correctness remains a viable strategy, even as other brands compete with marketing strategies, diversity committees and other efforts to stress to consumers they have a stance on political and social issues.

The brand did not respond to a request for comment.

If there’s a lesson to be learned, it’s that consumer outrage and hashtags may temporarily hurt a brand’s image on social media, but those can still be counteracted by advertising spending and personal relationships with celebrities and editors.

“At the end of the day fashion brands know that for everyone who is offended by the things they are designing or the things they may be doing there are hundreds of consumers ready to shell out their dollars,” said Kimberly Jenkins, assistant professor of Fashion Studies at Ryerson University.

Below, BoF provides a timeline of the brand’s controversies and resurgence.

January 2007 — The Advertising Standards Authority, the British advertising regulatory board, banned a Dolce & Gabbana campaign depicting models brandishing knives and suffering from knife wounds after it draws over 160 complaints from the public.

September 2012 — Dolce & Gabbana sent earrings with colonial-style imagery of black women down the catwalk at its Spring/Summer 2013 catwalk show.

“There's no denying they're offensive,” reported The Guardian.

March 2015 — Dolce and Gabbana said in an interview with Italian magazine Panorama that they are against the idea of gay parents.

“We oppose gay adoptions — the only family is the traditional one,” said Dolce. “I am not convinced by those I call children of chemicals, synthetic children.” Gabbana appeared to second these comments, stating that family “is not a fad.” 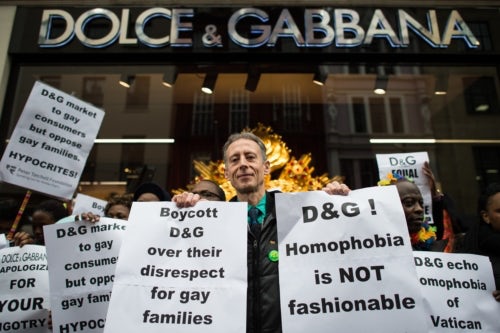 The comments sparked public uproar, with singer Elton John calling for a boycott. However, many key fashion figures stayed silent at the time. Anna Wintour, Cindi Leive, Roberta Myers, Ariel Foxman and Joanna Coles all declined interview requests by The New York Times. It was "a tacit acknowledgement of the power a major advertiser wields in the publishing world," The Times' Jacob Bernstein wrote at the time. Dolce apologised for his comments months later in an interview with American Vogue.

March 2016 — The brand sells $2,395 pompom-embellished "slave sandals" online. The name sparked backlash online with social media users, while Teen Vogue, Fashionista and other outlets reported the controversy. BoF’s own Imran Amed told The New York Times, “Given this is not the first time they’ve got into trouble, you would have thought they would have been a little more careful.”

June 2017 — On Instagram, the designers enthusiastically voiced their support of Melania Trump, a frequent wearer of their clothes. Dolce and Gabbana poked fun at the controversy, launching their own “#BoycottDolceGabbana” slogan T-shirts, which retailed for $245.

April 2018 — Gabbana discussed the duo’s succession plans for the brand. “I don’t want a Japanese designer to design for Dolce & Gabbana,” he told Reuters.

June 2018 — Gabbana commented on an Instagram post of singer Selena Gomez: “è proprio brutta!!!” — a phrase that roughly translates to “She’s so ugly.”

On stage at a BoF conference in Los Angeles, celebrity stylist Karla Welch said, “I reacted poorly to it. I had Dolce on the rack for a fitting and said, 'No, those can go away.' That’s just mean.” Fellow stylist Jason Bolden added, “Not since the beginning of time have you seen Dolce on my rack. Those silhouettes are amazing and they get everyone. But my girls are like, 'What? It’s a done deal.'”

The video was taken down within 24 hours following an outcry led by fashion watchdog Diet Prada. Soon after, screenshots of racist direct messages sent by Gabbana to an online critic went viral. Both the brand and Gabbana claimed their accounts were hacked.

The designers subsequently post an apology video to social media.

January 2019 — Kim Kardashian posted an Instagram story featuring Dolce & Gabbana product and tagging the brand. She swiftly deleted the post after it drew criticism from fans.

January - February 2019 — Dolce & Gabbana gowns and suits were absent from the red carpet at the Golden Globes, the Oscars and other events.

March-August 2019 — A few celebrities continued to wear Dolce & Gabbana for public appearances, including Katy Perry on “American Idol” in May. Meanwhile, fashion magazines continued to feature the brand on covers, worn by high profile celebrities including Ashley Graham for UK Harper's Bazaar and Kris, Kylie and Stormi Jenner for Vogue Arabia.

Kim Kardashian posted a series of pictures to Instagram — one of which featured Dolce himself — captioned, “Thank you Domenico! I hope North was a good assistant.” This time she did not delete the post.

August 2019 — Company filings reveal the brand suffered a sales decline in the Asia-Pacific market, according to Reuters. However, global revenue grew as US sales rose.

October 2019 — Olivia Coleman appeared on the cover of American Vogue's October issue, wearing a Dolce & Gabbana cape and trousers. The shoot was photographed by Annie Leibovitz and styled by Tonne Goodman.

January 2020 — Lucio Di Rosa joined Dolce & Gabbana as head of VIP relations. An industry veteran, he previously spent 15 years at Versace in a similar role; prior to that he worked at Giorgio Armani.

January - February 2020 — Dolce & Gabbana is spotted on numerous celebrities at the Golden Globes, Grammys and other high profile events, marking the brand’s return to the red carpet.

Among the A-listers wearing the label: Blake Lively, Lupita Nyong’o, Matthew McConaughey, Gwen Stefani and Jennifer Garner. Even Kate Middleton, Duchess of Cambridge, stepped out in a custom Dolce & Gabbana tweed suit for a charity outing.

Stylist Karla Welch, who spoke out against the designers 18 months earlier, dressed her clients Big Little Town in Dolce & Gabbana for the Grammys, tagging the brand in an Instagram post of the band pre-ceremony. The post drew criticism. Welch subsequently untagged the brand and removed the ability for users to post comments.