LONDON, United Kingdom — Gucci has been named one of the “hottest” luxury brands, while Prada and Giorgio Armani are “cooling” fast, according to a new report by Exane BNP Paribas.

The financial services firm assessed the “brand temperature” of luxury companies, based on the ratio between the editorial coverage they receive in print magazines, and their print advertising spend. Brands are ranked as “hot” if magazines give them more editorial space than their advertising spend should warrant, meaning they have more editorial coverage than print magazine advertisements — reflecting a “hot” level of appeal and desirability — whereas brands that fall below this ratio are “cold.” 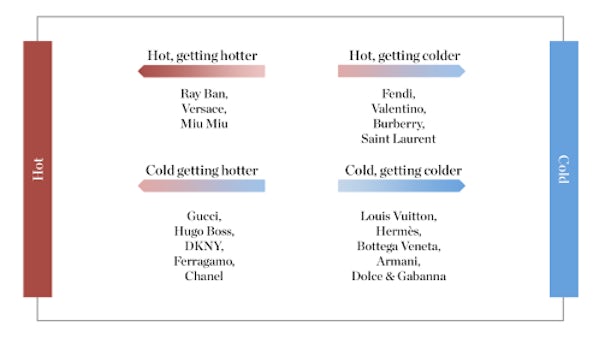 The findings are further proof that Gucci's turnaround under creative director Alessandro Michele and chief executive officer Marco Bizzarri is gathering pace. Since his appointment as creative director in January 2015, Michele’s idiosyncratic designs have generated significant buzz. Sales of his women’s ready-to-wear have risen 66 percent in 2016 and the Italian house is on course to top €4 billion ($4.5 billion) in revenue for the first time this year, Bizzarri said in June.

Meanwhile, Prada is battling weakening demand in Greater China, slowing global tourism and changing consumer behaviour. The Italian company has failed to meet its own earnings forecasts in 11 of the past 12 quarters, according to Bloomberg.

According to Exane BNP Paribas, a rising brand temperature can be expected to translate into higher full-price sell-through in wholesale retailers and greater space productivity in a brand’s directly-owned stores. This, in turn, could increase brand profitability and support sales. Conversely, a “cooling” brand would see all of these metrics deteriorate.

Other brands ranked as “getting hotter” — meaning spontaneous editorial coverage is growing faster than their marketing spend — were Hugo Boss, DKNY and Ferragamo, which were rated as “cold” in Exane BNP Paribas’ “brand temperature” report last year. Burberry, Valentino and Saint Laurent were “hot but getting colder,” which can be explained in part by the brands’ decisions to shift their advertising spend to the digital sphere.

Most of the 38 luxury brands analysed by Exane BNP Paribas reduced their print advertising spend, with the exceptions of Gucci and Saint Laurent, who were among the top ten spenders, followed by Ralph Lauren and Dolce & Gabbana.

Which Fashion Houses Have the Hottest 'Brand Temperature'?