NEW YORK, United States — Twitter ads tend to draw from a narrow assortment of brands: packaged food, alcohol and telecoms tend to show up over and over in users’ feeds. But recently, the likes of Hermès, Louis Vuitton and Cartier have started popping up alongside Campbell Soup, White Claw hard seltzer and AT&T.

Luxury brands have rediscovered Twitter. The platform lacks the visual flair of Instagram or YouTube, and its 156 million users pale in comparison to Facebook’s 1.6 billion. However, unlike those other social networks, it’s not as saturated with ads for clothing and jewellery brands. Luxury ads on Twitter may have a smaller audience, but it’s a relatively young and wealthy group.

“Brands are willing to experiment more now than ever before, and that's mainly due to the cost,” said Aaron Edwards, chief executive of the Charles Agency, a digital strategy and marketing firm that works with luxury clients like Cartier. “People are now becoming more averse to spending [millions] of dollars on [Facebook and Instagram] and solely on those platforms.”

Twitter ads take the form of “promoted tweets,” or messages that brands pay to appear in users’ feeds. These can be tweets from a brand’s official account, or a third party; some will promote a celebrity endorsing their product, or a funny tweet from a fan. Brands are also live-streaming fashion shows on the platform — 11 this year, including Louis Vuitton, Gucci, Dior and Chanel. 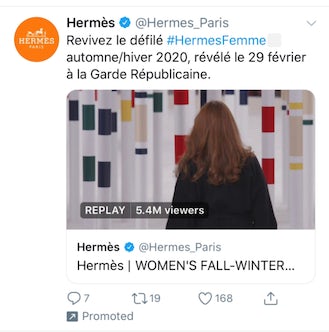 Hermès paid to promote a tweet linking to its Autumn/Winter 2020 fashion show, featuring a video of the Mondrian-inspired show and the hashtag #HermesFemme. Louis Vuitton promoted a tweet linking to a video of its most recent fashion show, namechecking designer Nicolas Ghesquiere. Cartier promoted its “L'Odyssee de Cartier” digital series on its origins and announced a new digital magazine, “Cartier News” via a tweet on March 2. The brand did not promote the publication on Instagram.

These ads have limited reach; Hermes has just 80,000 Twitter followers, compared with 10 million on Instagram. Promoted tweets also tend to have limited engagement compared with the photo platform. Last year, Louis Vuitton’s tweets garnered about 3 percent of the attention as its Instagram posts, though the platform outperformed Facebook, according to Tribe Dynamics. Last week, Hermes asked followers to like one of its tweets to receive a notification to view a live stream of its Paris show. Only 452 did.

They may have been the right 452 people, however. Twitter users tend to be younger, better educated and richer than the US as a whole (a Pew Research survey last year found 41 percent of Twitter users earn $75,000 or more, compared to 32 percent of all American adults).

Twitter struggled to attract advertisers in the mid-2010s during the rise of Instagram, but has seen those revenues surge in the last couple of years. In 2019, advertising sales increased 14 percent to $3 billion.

Twitter also offers a "firehose" of data, including every public tweet along with corresponding information on user names, location and engagement, said David Berkowitz, chief executive of Serial Marketer, a consulting firm.

“Instagram has always been somewhat of a black box in terms of data and in some ways, it’s gotten more difficult [to measure engagement] as they're experimenting with hidden like counts,” he said. “What's really different about Twitter is that Twitter not only has this scale of hundreds of millions of users — that might not be Facebook or Instagram size, but is clearly significant for any kind of media property — whose data they use as a revenue stream.”

Like other social networks, Twitter has had its share of scandals, from the proliferation of bots to user complaints about harassment and hate speech. Twitter ads are also limited to raising awareness; the platform does not allow for direct commerce.

Ultimately, the most valuable part of Twitter to luxury brands may be how it helps position them as a central part of the cultural conversation, in real-time through language rather than images.

“Brands are trying to figure out how to kind of mix this editorial aspect of their voice into something that's more news-like, which I think is a great way for them to capture attention,” Edwards said. “It's all about contextualising advertising and positioning the brand in terms of how the brand exists at the tip of what's popular in popular culture right now.”

10 Ways to Win on Social