NEW YORK, United States — Gwyneth Paltrow and Kanye West have very different personal brands, but they share a common taste in shoes: this year, both were photographed wearing Hoka One One sneakers.

In May, paparazzi snapped West sporting the hiking boot/sneaker hybrid instead of his usual Yeezys. In October, Paltrow posted a picture of herself on Instagram in Tracy Anderson’s gym, Hoka’s logo and unmistakable swollen sole clearly visible on her black sneakers. Britney Spears and Reese Witherspoon are also converts to the brand’s off-kilter aesthetic and comfort-first approach.

French co-founders Jean-Luc Diard and Nicolas Mermoud launched Hoka One One (pronounced OH-nay OH-nay) in 2009. The name is a Maori term meaning “to fly over the earth.” The former Salomon employees, who trained as endurance runners in the French Alps, landed on a lightweight design featuring an oversized outsole, which they say is more comfortable for trail running, especially downhill.

Hoka came on the scene at a time when minimalist running shoes were trending. The brand offered the complete opposite — a puffy, clown-like sole that promised athletes the most comfortable “ride” possible. Though the fashion world eventually embraced chunky dad sneakers, Hoka’s prominent logo and shades that looked like the result of a random spin of the colour wheel made the brand a tough sell to the casual fashion consumer. 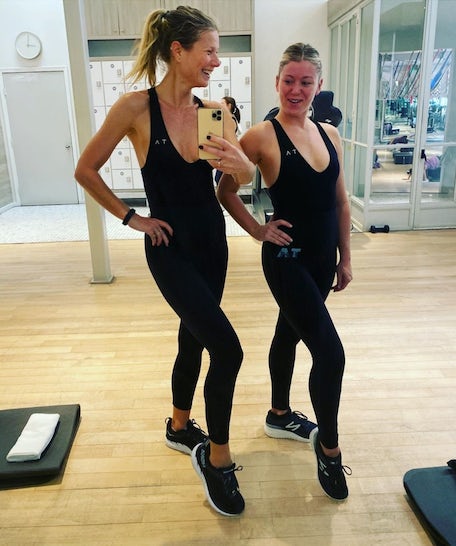 Strong word-of-mouth, the rise of athleisure and some well-timed collaborations have won Hoka plenty of new fans in recent years, however.

“At first I was like, ‘Yikes, that’s a crazy-looking shoe,’” said Tyler Haney, the founder of Outdoor Voices, who tried them years ago. Outdoor Voices has collaborated with Hoka since April 2018, and the pale blush and white colorways have been restocked seven times.

Hoka’s sales soared by 45 percent to $223 million in the year ending in May, and were up 50 percent in the most recent quarter, defying a slump in the technical running category.

“Hoka is one of the hottest brands on the market,” said Matt Powell, sports industry advisor at the NPD Group. “They started out with a product that really solved problems for people. People who had a knee or hip or ankle problem and had to stop running... found that wearing these shoes allowed them to run pain-free.”

Hoka’s remarkable run isn’t a complete surprise — after all, the brand has been owned since 2013 by Deckers Brands, a company that has made a science out of turning ugly shoes into viral sensations.

In the early 70s, Doug Otto and Karl Lopker met in Santa Barbara when they were both making flip-flops and sandals and selling them up and down the coast. The company was born in 1975 and went public in 1993. The Goleta, Calif.-based Deckers, which also owns Uggs and Tevas, among other brands, reported record sales in 2019 of more than $2 billion. The company’s stock has nearly quadrupled since 2017 and trades close to an all-time high.

Much of that success can be attributed to Ugg, which contributes about three-quarters of the wider company’s sales. In many ways it was the fuzzy boot’s dramatic ups and downs that set the stage for Hoka’s moment in the spotlight.

Uggs peaked in the early 2000s, when they were a favourite of Beyoncé, Kate Moss and countless other megastars. But success led to overexposure; consumers came to associate Uggs with down-market shops, knockoffs and being “basic,” instead of Sarah Jessica Parker and Britney Spears.

I think the definition of ‘outdoor’ has changed.

“First and foremost, we’re very tight and not looking to open it up widely,” she said.

Direct-to-consumer is a focus as well, though still less than 50 percent of the business. Hoka opened its first pop-up in New York over marathon weekend in November. Yang says there are no immediate plans to open branded stores, though online sales are “growing fast,” particularly in the US.

The brand is also attracting more women. Four years ago, about 65 percent of Hoka’s customers were men. Now it’s an even split, according to Yang. Hoka also switched from releasing new styles twice a year to a more constant flow, including muted colourways to bring in consumers put off by the brand’s “loud and proud” aesthetic, she said.

Besides Outdoor Voices, Hoka’s done collaborations with streetwear brand Engineered Garments and, most recently, Opening Ceremony. Yang said she regularly turns down requests to collaborate, prioritising partners that can introduce new customers without departing from the brand’s core values. Collaborations are also limited to colourways and materials; the shoes maintain the same technical specs. 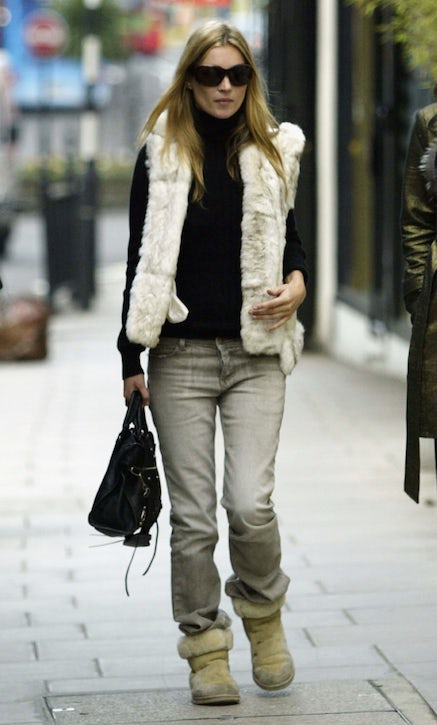 New categories are also a priority. While the brand has offered basic apparel in the past, it is launching a larger collection in the spring, which will include technical garments as well as post-workout items like jackets and sweatshirts. And, as Kanye discovered, there is a focus on more hiking styles, a category that sister brand Teva will also expand.

“I think the definition of ‘outdoor’ has changed,” Yang said. “It’s no longer about summiting the biggest peaks or camping in extreme conditions. It’s about time outdoors.”

Teva, best known for its sandals, will offer closed-toe hiking shoes starting in fall 2020, in an attempt to be a more year-round business. The brand, acquired by Deckers in 2002 after years of licensing the name, was Deckers’ money-making brand prior to Uggs. It saw $137 million in sales in the year ending in May, up 3 percent.

A recent New York Times article even declared, “Wow, Tevas Got Cute,” in response to more fashionable colours and a collaboration with Outdoor Voices.

“Teva was just throwing a ton of stuff at the wall for many years… Now they are focused on its heritage, the universal strap,” said Sam Poser, an analyst at Susquehanna International Group. “It’s still tiny, but it’s starting to turn the corner.”

Even Ugg is mounting a comeback, after years of declining sales. Revenue from the brand grew 2 percent to $1.5 billion in fiscal 2019. Deckers closed many wholesale accounts to “protect” the image of its classic boot, while finding success with a fuzzy sandal/slipper hybrid. The new shoes have one big advantage over the boots: they aren’t dependent on cold weather to drive sales.

Andrea O’Donnell, who since 2016 has overseen Ugg and Koolaburra, a lower-priced boot brand, said it was immediately clear that a brand “transformation” was necessary.

“We were noted in the Urban Dictionary in association with certain negative terminology,” said O’Donnell, who joined Deckers after a long career in luxury fashion that included a stint at Lane Crawford. “We were ageing very fast. We also defined ourselves in a very singular way as a kind of classic cold weather boot."

(That terminology, for the record, is “basic bitch,” grouping Uggs with pumpkin spice lattes and other mainstream tastes.)

We were ageing very fast. We also defined ourselves in a very singular way as a kind of classic cold weather boot.

O’Donnell brought in a new design team tasked with bringing some fashion credibility back to the brand. The result is the Fluff Yeah, an open-toe slide that comes in a rainbow of colours with a stretchy sandal strap behind the heel. It has resonated with teens and young millennials, O’Donnell said.

“I think they’ve done a masterful job of moving Ugg away from the ugly sheepskin boot story,” Powell said.

Ugg also cut back on collaborations, choosing to align with a few buzzy streetwear and fashion brands, including BAPE, Heron Preston and Eckhaus Latta. They are helping grow sales among men, who never embraced the brand even its heyday.

The common thread across Deckers’ brands is limited distribution — a legacy of the dramatic rise and fall of Uggs.

“Tell someone they can’t have it and they want it more,” O’Donnell said.

How Ugg Turned a Fashion Trend Into a Staple