Getting social media users to actually click through to e-commerce sites is notoriously difficult, especially in fashion and apparel. Instagram is tackling the challenge with “tap to view” tags, which debuted back in November. The feature allowed its nearly 600 million monthly active users to learn more about products from a selection of 20 brands and access e-commerce sites through the in-app browser. Now, the Facebook-owned image platform has announced that it is opening the pilot programme to thousands of US retailers in the apparel, jewellery and beauty markets.

In the testing period, 4 percent of users who encountered product tags tapped for more information and 19 percent of people that tapped the tag clicked on the “Shop Now” link. To facilitate the initial interaction, Instagram has redesigned the tags to be more apparent to users who are not aware the function exists.

The more posts with shopping tags in them, the more likely someone is to engage.

“We have seen that once our user discovers the product detail view, the percentage that then go to our e-commerce page directly is extremely high — double digits compared to what we normally see on an average social click through,” said Mary Beech, chief marketing officer of Kate Spade, one of the pilot program brands. She said consumers react more positively to images of product “in situ” on a model or influencer. The brand’s best posts to date have been of handbags with some novelty element, including one shaped like a rabbit from the holiday collection.

“The more posts with shopping tags in them, the more likely someone is to engage, so people are looking for products and this experience is helping them to learn more and hopefully make those purchases,” said Instagram's Director of Product Marketing Jim Squires.

Brands that already use Facebook’s product catalogue function, which is necessary to self-produce the shopping tags, may automatically be eligible to use the functionality, while others can apply directly to Instagram for access. Squire says the tags will be made available in other regions and categories in the future. In the meantime, Instagram is rolling out analytics capabilities to retailers who will now be self sufficient in posting images with the tags. — Chantal Fernandez

News broke on Monday that Bee Shaffer, daughter of Vogue editor in chief Anna Wintour, and Francesco Carrozzini, son of the late Vogue Italia editor Franca Sozzani, are engaged to be married. A spokeswoman from Vogue confirmed their engagement to People Magazine.

The relationship first came to light last fall when Shaffer and Carrozzini attended a New York screening of the documentary the latter directed about his mother.

Sozzani passed away in December after nearly 30 years at the magazine. In a tribute published on Vogue.com in December, Wintour described Sozzani as "no ordinary friend," and said they had reflected on their "children’s miraculous love affair" in conversations before her death.  — Chantal Fernandez

Agnona is trying a new retail strategy with a pop-up London salotto.

The Zegna Group-owned heritage Italian fashion house, best known for its use of luxury textiles like cashmere, angora and vicuna, has quietly unveiled a temporary concept store on New Bond Street. 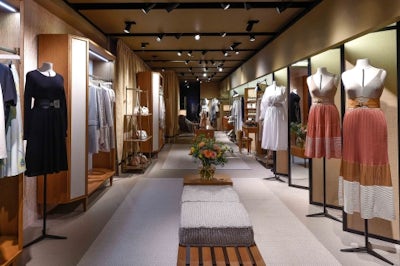 The 100-square-metre space, which will remain for the duration of 2017, was designed to feel like an intimate Italian apartment or salotto.

Alongside Agnona’s own ready-to-wear and home collections, the pop-up store features a selection of products from Italian brands, including perfumes from Laboratorio Olfattivo, a fragrance house based in Turin, and Murano vases from Venetian glassmaker Salviati.

Creative director Simon Holloway, who joined the brand in November 2015 following the departure of Stefano Pilati, describes the store as an experiment to engage consumers in a saturated retail environment, where networks of global stores differ little from city to city. “Whether you’re in London or Paris or Milan or Seoul or Tokyo, you often find the same product line everywhere. Our idea was to find things that aren’t readily available all over the place… it presents the opportunity to make everything much more personalised and more customised.”

The concept also reflects Agnona’s new positioning as a lifestyle brand, which has been led by Holloway, who last year oversaw the relaunch of the brand’s homeware line. “We wanted to offer our customers not only our products, but other things that represent our lifestyle — what would be in our own Agnona apartment,” said Alessandra Carra, CEO of Agnona.

The brand has already received interest about transferring the concept to other fashion capitals. “It’s something I’m considering,” said Carra. “At the very beginning, we thought it would be a London-only project, but… it might be the beginning of a different retail strategy.” — Helena Pike