MILAN, Italy — The German designer Jil Sander knows that the shortest distance between two points is a straight line. It served her well as she built the globally recognised brand that carries her name. The label is widely known for streamlined, modern pieces and impeccable tailoring. But what was often dubbed “minimalism,” Sander preferred to call “purity.”

Today, after changing hands multiple times, the Jil Sander brand — from which the founder departed for the third time in 2013 — is being rebooted by husband-and-wife duo Luke and Lucie Meier. Much has been made of the fact that one of the designers (Lucie) comes from a fabled Parisian couture house Dior, where she was interregnum creative director between Raf Simons and Maria Grazia Chiuri, while the other (Luke) is the founder of OAMC and the former head designer of celebrated New York streetwear label Supreme. But the duo downplay the contrast. “The thing is, on the outside, it seems we’re very different,” says Luke. “A lot of the time, we really pull from the same references and feelings. Our appreciation for things and design language is a lot more aligned than people would imagine. The process and scrutiny and level of detail and thought that goes into development is the same from Supreme to Dior.” 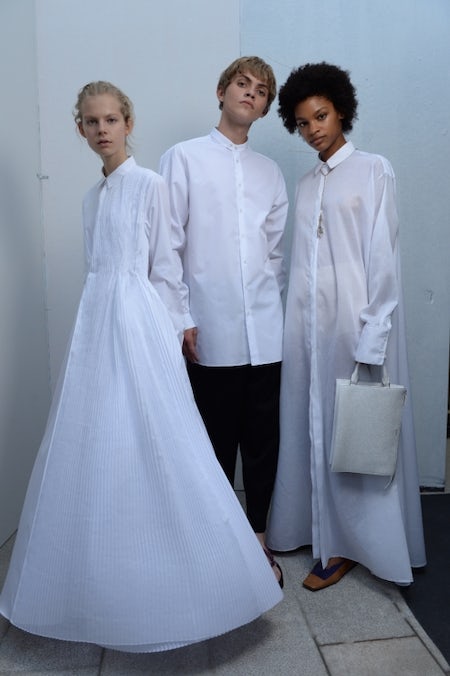 The two are keen to inject “soul and emotion” back into the Jil Sander brand. “It was important that we bring the emotion back into Jil Sander and to show the human side,” explains Lucie. “Purity was a big part of it. We wanted it to be pure and for people to feel something. We wanted to bring emotion into the whole collection and how the show took place, with the music. We wanted to show the humanity and the hand touch and the craftsmanship and not making things flat.” The result was an elaborate study on the white shirt, Sander’s lodestone, complete with silhouette variations — extended to the floor, waterfalled with plissé, fringed with tzitzit-like strings — as well as a range of precise tailoring and easy-to-wear separates in luxe textiles. It was also the first time the show took place outside of the Milan showroom, under a towering futuristic sliver designed by Zaha Hadid.

Luke Meier describes himself as the analytical one, calling Lucie more instinctual and emotional. For her, Jil Sander is indelibly linked to childhood memories. “There's no archive left in the house,” explains Lucie, “but my mother was a big Jil Sander fan, and she only ever dressed in Jil Sander, so I basically grew up with her archives, in the mountains in Switzerland far away from any kind of fashion or anything fancy.”

But with or without a literal archive, Jil Sander has an unmistakably strong and specific DNA. “I think in a way when you talk about DNA, it's a lot more powerful when you talk about emotions than when you talk about a vintage jacket from 20 years ago,” says Luke. “If you remember an emotion or spirit, it transcends the time of place of something. It builds an approach to how you can work, rather than a jacket with a seam running down it and a shoulder going forward at 20 degrees, which just seems arbitrary in a way. At Supreme, Jil Sander was one of the brands we would always be inspired by.” He echoes Sander's own sentiment — she once said that "a classic is an excuse, because one is too lazy to contrast the spirit of the time."

One of the major challenges facing the brand today is marketing its minimal aesthetic on the reduced real estate of social media, where graphic prints and bold designs are more likely to catch consumers’ attention. “It would be a mistake for everything to be designed for an iPhone screen,” says Luke. “That's not what we think about when we're designing.”

But the new creative directors acknowledge that their job consists of much more than just designing clothes. “It has to be a 360-degree approach because you have to consider all aspects of the business,” says Luke. “I don't think we came in and said that we want to change everything. We came and we assessed what's happening and what we can do. We have our own ideas about communications and product categories that we’re working on, and what we can expand on. We want to create a universe and flesh out every single aspect.” 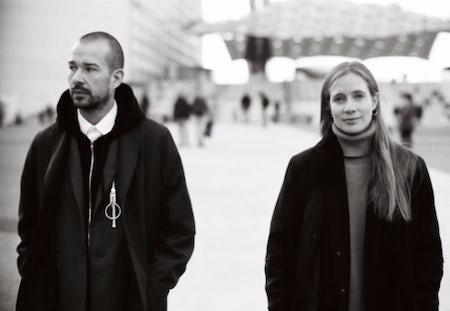 Jil Sander’s archival advertising campaigns (often photographed by either David Sims, Peter Lindbergh or Craig McDean, and styled by Joe McKenna) are currently enjoying a resurgence on social media. Going forward, the new creative directors are setting their hearts on partnerships with artists, in an aim to regenerate the buzz of Jil Sander’s iconic advertising campaigns.

Last week, Jil Sander debuted a video campaign, “Paused,” directed by German filmmaker Wim Wenders, that centres on the concept of interruption. “It's a translation of the way we view this whole business because it's a snapshot of a moment in time. It's not really about us hitting the reset button and designing a new collection. There is a decent amount of progression. The idea of pausing is to have people interested in the ‘pre’ and the ‘post’ and the way to flesh out that idea is to work on a film with Wim Wenders, because he’s not just a director and he's very considerate of aesthetic, colour, music, which is integral to us building this bigger picture.” The film was followed by a series of images taken by Mario Sorrenti at the UNESCO World Heritage Site in Mallorca, published on social media and printed on 10 unisex t-shirts, as well as several series of behind-the-scenes imagery by photographer Larry Fink, known for his social reportage.

The brand has gone through a lot. After making all the possible decisions, we decided to take the ‘full blast rush’ strategy.

“When I joined, it took me a few months to understand what was going on with the brand and what it had gone through,” says Alessandra Bettari, chief executive, who joined last year from Valextra. “The brand has gone through a lot. After making all the possible decisions, we decided to take the ‘full blast rush’ strategy. The decision was to take risks.” By full-blast rush, Bettari is referring to the process of sweeping out the past to make way for a completely new aesthetic across the business, seen most successfully at Gucci, Saint Laurent and Balenciaga.

According to Bettari, several of the most important elements of the business, including e-commerce and social media, had to be re-done from scratch, which was done after the arrival of the Meiers. “Going forward, the challenge is to first of all define and settle on a calendar that allows us a development process that takes all the values that we've talked about,” says Bettari. “They talk a lot about purity, but behind purity there is this incredible attention that they're giving to form and how things are constructed. This is an organisation that is paying attention to detail and form.”