On Wednesday evening, the sportswear giant Nike staged a massive runway show at the Shed venue in Hudson Yards, kicking off the conversation around the 2020 Olympics and showcasing its vast offering across categories, from new collaborations with Sacai and Virgil Abloh to Olympic uniforms made from 100 percent recycled materials, as well as new runners (Nike Air Zoom Alphafly NEXT%) and basketball shoes (Nike Air Zoom BB NXT).

While several editors were flown in from abroad to attend the event, not all had plans to stay for the New York ready-to-wear shows. Several fashion designers also were also there, including Abloh, 1017 ALYX 9SM’s Matthew Williams and Simon Porte Jacquemus. Drake was seated next to newly appointed Nike Chief Executive John Donahoe, who replaced Mark Parker in January. However, the real stars were the Nike-sponsored athletes, including American high jumper Vashti Cunningham, skateboarder Sky Brown and basketball player Diana Taurasi, who walked alongside a diverse cast.

Nike frequently stages brand moments for press and influencers. However, the unexpected runway element added impact and urgency. The event started with a traditional runway show featuring models wearing Nike’s latest collections — from boiler suits to flyaway skirts. It segued into a section spotlighting Olympic legends including Lisa Leslie, Carl Lewis, Brandi Chastain and Joan Benoit Samuelson, followed by Nike's current roster of "elite athletes," including some future Olympians. There was also a tribute to the late Kobe Bryant, whose jersey was worn by four young children, and a dance party.

In an era when the runway show’s relevance is being tested, why did Nike’s attempt feel so impactful? 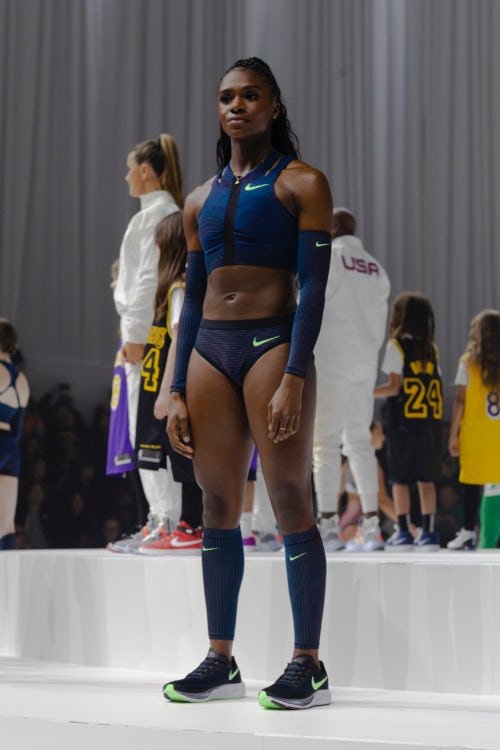 For one, Nike used the runway as a storytelling mechanism, walking the audience through its product plan for the next year and beyond — a slick way to refocus the brand's narrative. While its gutsy partnership with activist football player Colin Kaepernick has proven to be worth the risk, Nike has also weathered scandals in recent years: accusations of a "boy's club" culture and the suspension of an elite Nike running coach after doping violations.

Nike is also adjusting to new leadership. Longtime CEO Parker stepped aside in January, earlier than expected, and was replaced by board member Donahoe, an outsider at a brand with a deep history and ingrained culture. Parker is now executive chairman of the board.

In its most recent reported quarter, Nike's revenue was up 10 percent year-over-year to $10.3 billion. Overall revenue exceeded analyst expectations, although sales in North America came up short as the region continues to be a challenge for Nike and many of its competitors.

But on Wednesday, the strength of Nike's brand — its products can be sold in tandem at Kohl's and Dover Street Market with no repercussions — remained palpable. At the end of the show, as the last model-athlete walked off the stage, the audience fell silent, waiting. There was no designer to take a final bow, no one to applaud. Perhaps that was the most forward-looking thing about it.