How to Do Pride Marketing Right

With parades cancelled and civil rights protests top of mind, many fashion brands are rethinking how they show their support for the LGBTQ community.

How to Do Pride Marketing Right

With parades cancelled and civil rights protests top of mind, many fashion brands are rethinking how they show their support for the LGBTQ community.

Join us on Wednesday for a half-day of online events exploring fashion’s responsibility to people and the planet as the world grapples with a climate emergency, racial injustices and a once-in-a-lifetime economic and public health crisis. Space is limited. Register now to reserve your spot.

NEW YORK, United States — Abercrombie & Fitch’s Instagram account had all the hallmarks of the usual late May ramp-up to Pride Month. One post showed a limited-edition T-shirt with the slogan “Bright Future” in rainbow letters. Another showed Jari Jones, the trans model, actress and activist, laughing while reclining on a couch in another of the brand’s shirts, this one featuring the pastels of the trans flag.

That was two weeks ago. Most of Abercrombie’s most recent posts are stark black boxes, most displaying statements in solidarity with the Black Lives Matter protests. Items in the Pride collection are on sale at 20 percent off.

"We’re not celebrating the way we usually do until all of us can celebrate — together," the brand said in an Instagram post on Sunday.

Brands have eased off the usual flood of glittery, brightly hued merchandise and pro-LGBTQ marketing campaigns this year, guessing that between the pandemic and the Black Lives Matter protests, consumers aren’t in the mood to buy rainbow underwear and T-shirts. In the US, the number of Pride-themed clothes and accessories for sale is down 58 percent compared with last year, according to retail data firm Edited.

Most cities have cancelled in-person events meant to recognise and celebrate the LGBTQ community, and Abercrombie isn’t the only brand to dial back its online marketing during the protests. With no parades, concerts or parties to post about, consumer engagement with the #Pride hashtag has plunged by nearly 80 percent for 50 large fashion brands tracked by Tribe Dynamics.

It’s a quandary for brands, many of which still see Pride as a key way to connect with customers. Young people in particular want the companies they shop with to openly support LGBTQ rights. Even with this year’s pullback, hundreds of brands released collections in May and June.

Pride is super important, but we didn’t want that to overshadow what’s been happening.

“Pride is super important, but we didn’t want that to overshadow what’s been happening because timing-wise it was just tricky,” said Todd Snyder, whose brand postponed the release of its Pride collection of T-shirts and sweatshirts featuring designs by LGBTQ artists, from mid-May until June 23 due to the pandemic. "We're not just doing this to sell T-shirts or what have you. We want to bring awareness to our audience."

Fashion’s approach to celebrating — and profiting from — Pride was probably due for a correction even before the pandemic and the protests. Marketing around Pride has exploded in the last few years, with brands eager to show their solidarity with (and, critics would say, capitalise on) a cause that’s popular with younger consumers. Last year, fashion brands introduced over 5,000 Pride-themed products in the UK alone, a 164 percent increase over 2018, according to Edited.

Pride products now run the gamut, from Goose Island’s drag queen-inspired beer to rainbow MAGA T-shirts from President Donald Trump’s campaign website. However, companies may have overestimated demand for rainbow merchandise: 40 percent of items tracked by Edited were on markdown by mid-July last year, and 90 percent went on sale by August.

A backlash has been building as well, with LGBTQ activists saying many Pride collections exploit the community for profit without providing much in the way of support. In 2019, only 64 percent of companies that ran a Pride campaign actually donated to an LGBTQ cause, according to Reboot, a digital marketing agency.

“It’s reached a critical mass, the point of everyone splashing a rainbow on a salad bowl or toothbrush to participate, but members of the queer community had been wondering who this was for, and what is this even about?” said Whembley Sewell, executive editor at Them, Condé Nast’s LGBTQ site. “A lot of the ideating around Pride was happening in a corporate vacuum.”

Plenty of companies have stuck to the one-off rainbow T-shirt strategy this year. But an evolution is underway.

During Them’s first full year of publishing in 2018, for example, most ad revenue was related to Pride and was displayed in and around June, said Paul Robertson, Condé Nast’s head of brand marketing. This year, however, brands like HBO and Maybelline have planned broader campaigns that extend well beyond the month.

Calvin Klein, too, went with an “always on” approach, with LGBTQ-themed content teed up to run online throughout the year, said J.D. Ostrow, the PVH-owned brand’s acting chief marketing officer. 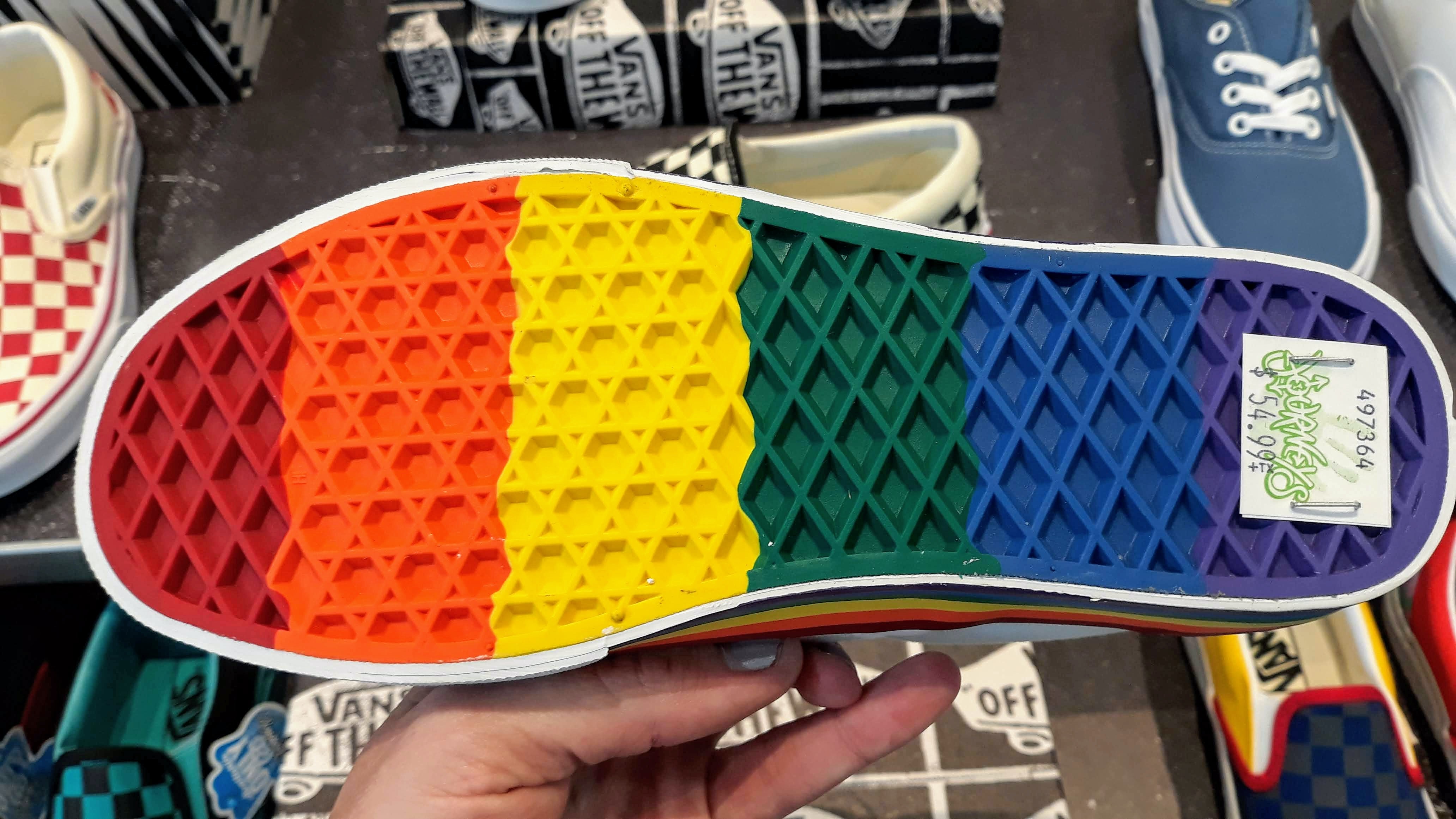 This year, photographer Ryan McGinley shot a diverse group of subjects, including actor, writer and activists Chella Man and Brazilian singer and drag queen Pabllo Vittar. Additional photos and videos will be released in the coming months.

Hiring LGBTQ photographers, designers and talent to create Pride collections and create campaigns is a way brands can show their support, Sewell said.

“You have to relinquish some of that old school thinking of controlling the narrative and scripting everything,” Ostrow said. “You get the most interesting stories and emotions ... when you turn that over.”

Of course, where the profits go is paramount.

Some brands tie donations to their Pride products, sometimes as little as 10 percent of sales or profits. Consumers and activists have pressured brands to raise the bar, and some have: Asos donates 100 percent of sales from its annual collection to GLAAD.

Others donate directly to nonprofits that work with the LGBTQ community.

“We found that this approach is really the best way of supporting the organisations year after year,” said Ilana Finley, vice president of global communications and social impact at Converse. “When you tie it just to sales, if a collection doesn’t do well in a given year that means you can end up supporting an organisation less.” 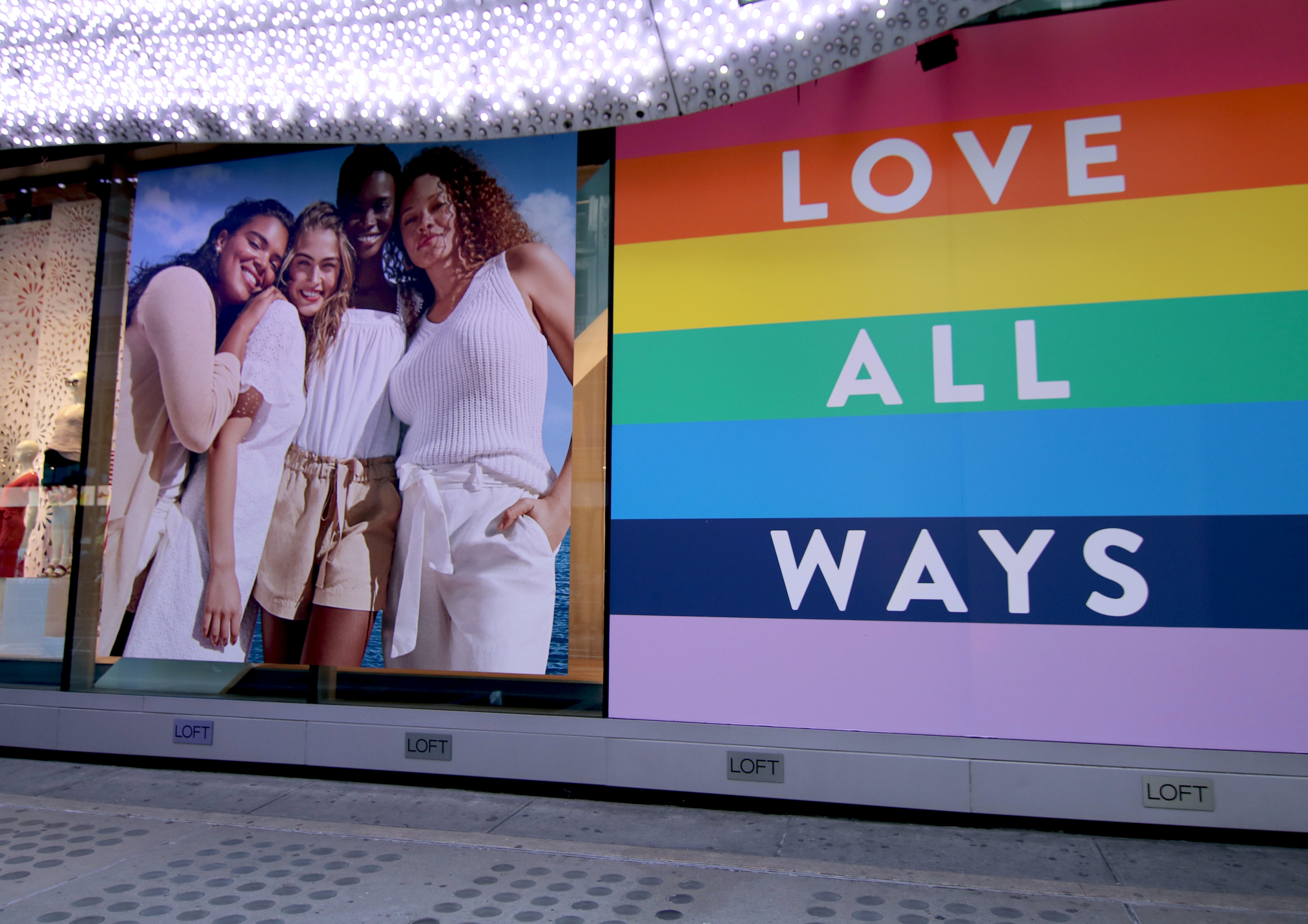 The Nike-owned brand, which has released Pride-themed shoe collections every year since 2015, is donating $100,000 this year to the Ali Forney Centre, Out MetroWest and the It Gets Better Project, and sending free products to the Boston Alliance of Gay, Lesbian, Bisexual, and Transgender Youth. Abercrombie said Sunday it would donate $200,000 to The Trevor Project. Calvin Klein is donating to onePULSE, and a spokesperson said the brand has donated over $100,000 to LGBTQ causes this year.

“It comes down to make sure you are putting money into the community,” said Sewell. “Don't look away from the areas of our community that need help while profiting off our image.”

Brands should also consider the sourcing of Pride-themed products. When UK retailer Asda conceived a Pride collection for its George clothing line, it dropped some items that could only be manufactured in countries with poor records on LGBTQ rights, said Adam McCann, chief executive of Diversity Role Models, a UK nonprofit that is working with Asda on the campaign.

This year, brands must also navigate the tricky politics of the anti-racism protest movement, which has dominated the national conversation since the killing of George Floyd in late May. The mix of sombre support for Black Lives Matter and exuberant posts about Pride on Instagram feeds can be jarring.

But at heart, both are civil rights causes. After all, Pride is held in June to commemorate the riot outside the Stonewall Inn in New York in 1969 that helped spark the modern LGBTQ rights movement. Many peaceful demonstrators have been advocating for the rights of black people who are also LGBTQ. In Brooklyn on Sunday afternoon, thousands of people — many dressed in white — participated in a rally and silent march for black trans lives.

“The legacy of Pride is rooted in protest and it’s also been directly influenced by the structures and strategies of the civil rights movements,” Sewell said. “It’s not about not activating during Pride because you’re afraid it’ll take away the attention of Black Lives Matter. You can be smart, and make sure your [campaigns] for LGBT highlight those within who are the most vulnerable, and those are Black, queer and trans.”

Harry’s, the shaving company, issued a statement condemning racism in early June and pledged $500,000 to organisations that support mental health for the Black community. It also released a rainbow shaving set earlier in May, with 100 percent of profits going to the Trevor Project, in addition to creating a digital gallery that highlights LGBTQ artists.

“We don’t want to pin one cause area up to another,” said Maggie Hureau, Harry’s head of social impact.

Converse has made the overlap between Pride and other civil rights movements central to its campaign this year. It’s using the “more colour, more pride” flag, which includes black and brown stripes to represent members of the LGBTQ community who are people of colour. Amber Hikes, the activist who brought the flag to national attention in 2017, consulted on the campaign and serves as one of its faces.

The campaign was mapped out months before Floyd’s killing sparked protests across the country, Finley said. After consulting with members of Converse’s internal networks of LGBTQ employees, as well as Hikes, the brand decided to move forward as planned.

“We had always been focused on this idea of ... intersectionality and representation that really comes within celebrating and highlighting black and brown voices within the LGBTQ community,” Finley said. “It still felt right.”

Pride Comes From Within

The final piece of any Pride campaign is for brands to make sure their marketing reflects how they operate. Some corporations, including AT&T and Pfizer, have been criticised for donating both to pro-LGBTQ groups and anti-gay politicians. This month, brands including Adidas, Reformation and Zimmermann have been called out for the disparity between their pro-Black Lives Matter statements on social media and how they treat black employees.

If you are doing branding campaigns in the month of June but don't live those values, the marketing will come back to bite you.

“If you are doing branding campaigns in the month of June but don't live those values, the marketing will come back to bite you,” said Filip Nemeth, senior vice president at the consulting firm AlixPartners. “Take a look internally and make sure that employees feel included and empowered the other 11 months of the year too.”

Listening to employees from the outset is a good first step. Converse’s first Pride collection in 2015 was driven by the brand's internal LGBTQ network, which had started the year before, Finley said.

McCann said he asks companies about their internal policies and culture before agreeing to partner with them — as well as why they want to do a Pride campaign in the first place. He said it’s the best way to separate which companies truly support the LGBTQ community, and which want to use it to boost their brand.

“Is it really part of who you are as an organisation? That question ‘why,’ you can ask it so many times,” he said. “It says a lot about the response that you get.”

How to Avoid the Greenwashing Trap