With the brand’s second fashion-music bonanza set to stream on Amazon this Friday, BoF examines how Savage X Fenty is performing in a competitive market.

With the brand’s second fashion-music bonanza set to stream on Amazon this Friday, BoF examines how Savage X Fenty is performing in a competitive market.

NEW YORK, United States — A year ago, Rihanna and her teams moved heaven and earth to pull off an ambitious project: a fashion musical to promote her lingerie line, Savage X Fenty, featuring models, dancers and musical performers, filmed in front of a live New York Fashion Week audience in one continuous take and aired 10 days later on Amazon’s streaming platform.

The conceit was about more than Rihanna’s clout and ability to book hot performers: the show took the Victoria’s Secret Fashion Show playbook and reimagined it for 2020, casting models and dancers with curvy hips, tattoos, shaved heads, prosthetic legs — visual signifiers of the sexy brand’s inclusive marketing mission.

The fanfare paid off: Savage X Fenty’s earned media value, a measure of how much people are talking about a brand online, was more than five times as high as the previous month, according to Tribe Dynamics. Over the next six months, the brand’s average monthly earned media value was more than three times what it was the six months before the show.

On Friday, a second edition of the highly choreographed show is coming again to Amazon Prime, where viewers will be able to shop the pieces they see right on the platform. Slated models and performers include Bad Bunny, Miguel and Rosalia. Musician Lizzo will also appear as a model, as will other artists like Normani, runway regulars Bella Hadid and Cara Delevigne and even actress Demi Moore. 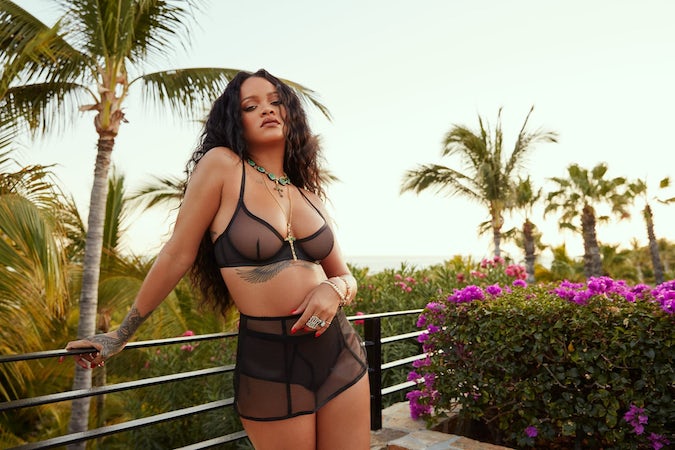 With global name recognition and more than 87 million followers on Instagram, you would think that someone like Rihanna could launch an apparel brand without much marketing investment — especially after proving herself with her highly successful beauty line, launched with LVMH’s Kendo Beauty in 2017.

But the $13.6 billion US women’s lingerie market is potentially a bigger opportunity: Victoria’s Secret is shrinking, creating the first chance in decades for new brands to gain a toehold. Plenty of brands are trying, including American Eagle’s Aerie, which is estimated to be approaching $1 billion in annual sales this year and leans on a similar, though less overtly sexy, message of inclusivity. Well-funded digital brands are also grabbing market share by promising better fits or sustainable production.

Most of these brands were already flourishing in May 2018 when Savage X Fenty launched as a joint venture between Rihanna and TechStyle Fashion Group, the company behind Fabletics and other digital subscription-based apparel brands. The brand has since raised $70 million in funding and was expected to generate $150 million in revenue in 2019.

Despite Rihanna’s fame, the last two years haven’t all been smooth sailing for the accessibly priced label (bras run from around $10 to $30.) A customer watch group complained about the brand’s subscription program, which it said “ensnares consumers,” and others have left negative reviews and comments online about the quality of the products.

None of that has slowed Savage X Fenty’s momentum.

Sales of Savage X Fenty products have increased consistently year-over-year over the last 12 months, more than doubling each month between February and August 2020, according to data from Earnest Research, which tracks direct-to-consumer sales. (Their data does not include Savage X Fenty sales on Amazon.)

Meanwhile, Victoria’s Secret has continued to struggle. The brand was forced to close its stores during the spring lockdowns and briefly halted online sales as well. Victoria’s Secret’s worst month in 2020 was Savage X Fenty’s best: in April, the former’s sales were down 63 percent, while the latter’s were up 218 percent, according to data from Second Measure, which also tracks US direct-to-consumer sales. 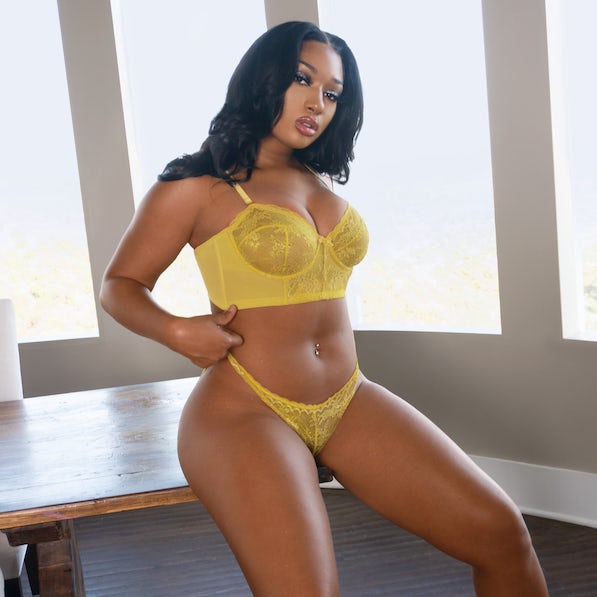 "We continue to look at Rihanna’s businesses to date have all been so powerful as it relates to inclusion and diversity," said Chelsea Gross, director at Gartner for Marketers. "They are definitely filling a gap that Victoria’s Secret wasn’t able to necessarily maintain." She said the firm tracked that three-quarters of users going to Savage X Fenty's website directly or through organic search, signalling a healthy approach to consumer marketing costs.

But Victoria’s Secret’s stumble, and its competitors’ rise, is about more than the lingerie giant failing to shift away from its lean and toned Angels models while mass culture shifted toward values of diversity and individuality. After all, inclusivity and diversity are “table stakes” in the lingerie market right now, as Heidi Zak, founder of ThirdLove, a direct-to-consumer competitor, told BoF in March.

As recently as 2017, Victoria’s Secret was still pouring the majority of its investment budget into mall stores, locations which it is now closing at a rapid pace. So the pandemic store closures were exceptionally damaging for the brand, with total sales decreasing 39 percent in the second quarter of the year to $977.5 million, and may permanently eat into its market share as shoppers look elsewhere for intimate apparel. (Victoria’s Secret saw a jump in online and catalogue sales during the period, too, up 65 percent year-over-year and representing 63 percent of the quarter’s sales. In 2019, the online and catalogue segment only represented 33 percent of total sales.)

Gross said Savage X Fenty's online distribution approach, which is scaled through Amazon, has been a resilient strategy for the pandemic. But brick-and-mortar networks are still important. Aerie is chasing both online and offline sales, with an increase of 142 percent in e-commerce in the most recent quarter, during which it also opened 14 stand-alone stores bringing the total to 160. It has another 175 stores connected to parent brand American Eagle, one of the only mall brands still attracting shoppers. Savage X Fenty, too, has experimented with retail through pop-ups shops.

Then there’s Savage X Fenty’s modern marketing approach. Even as market leaders like Victoria’s Secret and Calvin Klein incorporate the same kind of messaging and imagery about body positivity, Rihanna still has the advantage of telling that story more authentically as the Black female head of the brand. Her presence has only become more important this summer, as the Black Lives Matter movement spurred shoppers to look for Black-owned businesses to shop from, and questioned the messages of support from corporate businesses led by majority white boards. When Rihanna donated to Black Lives Matter funds or shut down her three businesses on Blackout Tuesday in June to raise awareness for the movement, it carried more weight than similar messages from other brands.

Equally important is Rihanna’s connection to other celebrities who are eager to support her and the inclusive message of her brand — and would likely require larger fees to secure by smaller rival brands. And she isn’t enlisting the typical names, but people with dedicated online followings who may be outside of the typical Hollywood and mainstream music circles. Spokeswomen include singer Christina Milian (6.4 million followers), Youtube star Carmen Pritchett (3.2 million followers), Euphoria actress Sydney Sweeney (2.3 million followers) and Jamaican dancehall artist Shenseea (2.8 million followers).

When the lingerie business announced popular rapper Megan Thee Stallion (15.7 million followers) as an “ambassador” in May with a campaign and collaboration collection, Savage X Fenty generated more earned media value than it did with the first Amazon fashion show, according to Tribe Dynamics, as well as its biggest sales spike of the year so far, according to Earnest.

The interest in the performer and her connection with Savage X Fenty also defied what Tribe Dynamics called “an industry-wide slump” in the second quarter of the year, for many brands the one hardest hit by Covid-19 lockdowns and diverted attention to social justice causes.

Where does Savage X Fenty go from here? Can it defy the slowdown facing some of its online competitors like Third Love, which saw sales growth decrease in 2019?

In many ways, Rihanna’s brand is reaping the benefits of a pandemic friendly strategy it was already building before 2020: digital-first distribution channels and a celebrity-filled runway show anyone with an Amazon membership can watch. As long as her eye for talent and keen understanding of what goes viral on the internet remains, she will continue to draw eyeballs and steal market share from the lingerie leaders.

Plus, now the brand has a whole new segment to explore: the men’s market. On Friday, Savage X Fenty is releasing its first boxers and loungewear designed with Christian Combs in a market dominated by the same five brands for the last six years (Hanes, Fruit of the Loom, Jockey, Nike and PVH). Much like in the women’s space, the men’s market has also seen a rise of new digital brands over the last decade, like Mack Weldon and CDLP, many of which are pushing a message of high-tech fabrics or ease of purchase outside of the department store. (Savage X Fenty has shown its women's products on a range of genders, and will do the same with the men's products in Friday's show.)

With its giant logos and satin fabrics, Savage X Fenty’s men’s offering is likely to compete more with the sexier aesthetics of brands like PVH’s Calvin Klein, a well-oiled marketing machine that has its fair share of coveted celebrity ambassadors and billions in marketing budgets.

But other market leaders, like Victoria's Secret in particular, are too large to quickly pivot to adopt the strategies that have made Savage X Fenty's stand out in the market so far, said Gross.

For now, Rihanna’s label still has a lot of market share to grab. The real question is how fast and at what cost.