NEW YORK, United States — The cast of 'Star Wars: The Force Awakens,' have a slog of a global press tour ahead of them, starting on 14 December with the world premiere in Los Angeles. But on 2 December, cast members Lupita Nyong'o, Daisy Ridley and John Boyega were bright eyed as they walked the red carpet at Skylight Modern in New York, where a handful of one-off fashion ensembles, inspired by characters from the film, were displayed under bright white lights.

Participating designers included Giles Deacon, Billy Reid — who made a teddy-bear coat in Chewbacca’s likeness — and Rag & Bone's Marcus Wainwright and David Neville, who brought their children to the event. The next day, the outfits went on display in the windows of Bloomingdale’s on Lexington Avenue, and will be auctioned off via Charitybuzz.com, with proceeds benefitting the Child Mind Institute.

Fashion and accessories brands, from mass-market to niche, are feeling the force of Star Wars. Nixon watches, Kay Jewelers, Matchless luxury leather jacket makers and cosmetics company CoverGirl are amongst the brands that have signed licensing deals with Disney, which acquired production company Lucasfilm for $4 billion in 2012, to release Star Wars capsule collections this Autumn. (Lucasfilm was founded in 1971 by George Lucas, the creator of both the Star Wars and Indiana Jones films.) Other designers’ Star Wars-inspired efforts range from the abstract, like Peter Pilotto’s Millennium Falcon-inspired jumpsuit, to the ridiculous, such as a pair of shoes with Yoda figurines for heels, by footwear label Irregular Choice. 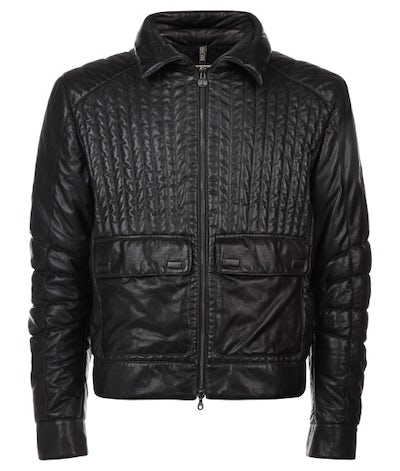 The goal is to tap into the franchise’s significant fan base in order to raise brand awareness and, of course, drive sales. Star Wars products are projected to generate $5 billion in the next year, according to Macquarie Securities analyst Tim Nollen. Furthermore, Star Wars’ track record for shifting product is better than any other film franchise in history. According to market research firm NPD Group, Star Wars has generated more than $32 billion in merchandise sales since the release of the first film in 1977. This far exceeds comparable estimates for Harry Potter ($25 billion) and James Bond ($8 billion), according to The Telegraph. Unlike Star Wars’ broad appeal, most of the merchandising around Harry Potter has been geared toward children, while Bond has focused on the luxury market, tapping labels such as Tom Ford and Omega for costumes and collaborations.

Unlike Harry Potter’s scarf or James Bond’s tuxedo, over the years, Star Wars has also served as inspiration for ready-to-wear designers. The Rodarte sisters dedicated their Autumn/Winter 2014 collection to the franchise, printing giant images of Star Wars characters into silk evening gowns. (George Lucas even attended a Rodarte runway show in 2012.) Preen by Thornton Bregazzi designer Justin Thornton is another fan: “The original films came at pivotal points in my life and have influenced my tastes, my likes and my designs,” he says. “Thea [Bregazzi, his wife and co-designer at Preen] and I will often say, if we love something, ‘It's so Jedi.’” Preen’s Autumn/Winter 2014 collection featured a Darth Vader-printed shirt. “If we ever go futuristic in a collection, there is always a Star Wars reference,” adds Jonathan Anderson, designer at Loewe and JW Anderson.

It was against this backdrop that Disney laid out its fashion partnerships for the Star Wars film to be released on its watch. “Our whole strategy is to be very segmented,” says Paul Southern, senior vice president of licensing for Lucasfilm at Disney Consumer Products. “We’ve developed apparel from the mass market up to the end of the trade. We’ve broadened out the [offering], including more for girls and women.” According to Southern, about half of Star Wars’ fans are female.

Italian-owned British motorcycle maker Matchless outfitted the cast of the upcoming film in its leather jackets. It has also produced a 16-piece fashion line, featuring a Hans Solo jacket and an Obi Wan Kenobi leather parka, priced from £200 to £1300 (about $302 to £1964). “It helps to change the meaning of our brand,” says Michele Malenotti, owner and chief executive officer of Matchless. While he declined to reveal revenues, Malenotti says the Darth Vader-inspired zip-up leather blouson has been the collection’s greatest hit at retail thus far.

Nixon, which debuted its first collection of Star Wars watches in August 2015, initially turned down the offer to collaborate with Lucasfilm and Disney. “We’re total fans, but we were hyperconscious of the fact that we should do something clever and unique, not just use a logo,” says Tyson White, the company’s global vice president of product. “It’s been interesting to see just how big the demand for Star Wars is out there.” According to White, Nixon’s Star Wars watches currently constitute the highest-trafficked pages on its e-commerce site. The brand also sells belts, wallets and backpacks inspired by the film’s characters. 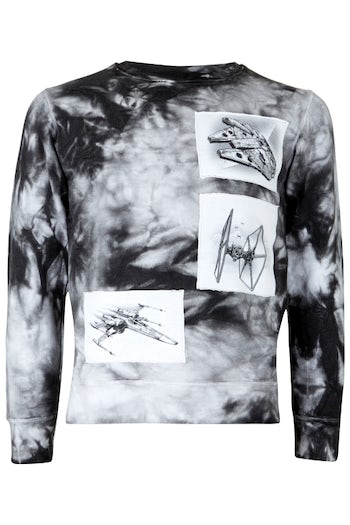 Bloomingdale’s is not the only store to host events around the much-hyped film. Back in November, Galeries Lafayette in Paris staged a Star Wars-inspired holiday show to kick off the season, and launched a 4,000-square-foot Star Wars pop-up shop, which includes pieces designed with students from Institut Français de la Mode. Selfridges, too, has taken steps to woo the franchise’s fans. The department store launched a fashion collection including contributions from British brands including Peter Pilotto, Preen, JW Anderson and Bobby Abley, as well as Phoebe English and Thomas Tait, and hosted a charity auction of ready-to-wear designs from the participating designers. The store has also curated a range of Star Wars-inspired items, including gowns from Rodarte’s Autumn/Winter 2014 collection, pieces from Bobby Abley’s Spring/Summer 2016 runway show, as well as toys, sweets and novelty items, such as a £27,995 (about $42,303) Battlepod arcade game. In-store, fans can also participate in Jedi training — where one learns the ways of the lightsaber — or opt for Princess Leia-esque hair at the in-house braid bar.

While sales are the motivation behind licensed product collaborations, some of the more esoteric collaborations are more about marketing. At Bloomingdale’s, the Star Wars clothes in the window displays will never be sold at retail — rather, they serve to generate media attention and increase footfall. Selfridges’ Star-Wars fashion items exist as part of a broader product promotion. “The commercial opportunity is really on toys,” says Judd Crane, director of womenswear and accessories at Selfridges. “That’s where we made a significant investment. This has always been much more about doing something interesting and engaging for our customer.”

To be sure, investing in what will likely be the biggest film event of the year is a safe bet for stores this holiday season. “Rarely do you find an iconic franchise like Star Wars. It crosses genders, ages and lifestyles, and has united generations for generations,” says Marshall Cohen, chief industry analyst at NPD Group. “It is a property that not only endures time, but reaches into the future.”