KARACHI, Pakistan — Aside from the appearance of Pamela Anderson in a Vivienne Westwood show or Lady Gaga walking for Marc Jacobs, few Western celebrities take to the runway. In the big four fashion capitals, A-listers usually stick to ad campaigns or the front row. Truth be told, most of their agents would consider the catwalk a faux pas.

In South Asia, however, featuring major celebrities on the catwalk has become an increasingly powerful marketing strategy for high-end designers. In this part of the world, there’s less stigma for A-listers flirting with the catwalk. Even Bollywood royalty like Shahrukh Khan and Aishwarya Rai get in on the action.

As Amazon India Fashion Week gets under way in New Delhi, Indian casting directors are trying to hold their cards close to their chest, not revealing their “celebrity showstoppers” until the moment the actors hit the runway. But a month ago, at Lakme Fashion Week in Mumbai, India’s film capital, star power was in full force. 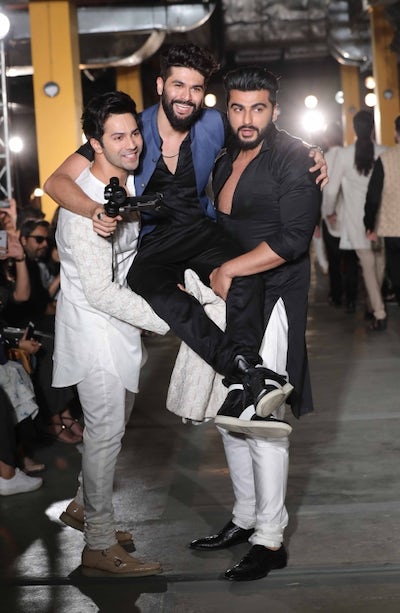 Varun Dhawan and Arjun Kapoor, part of Bollywood’s vivacious Gen-X, were among the cast of designer Kunal Rawal’s show. The charismatic actors lifted the designer up when he took his bow, an image of boyish buffoonery that ran wild on social media. On Rawal’s Instagram page, a short video clip of Dhawan on the catwalk yielded over 11,000 likes (his posts usually generate likes in the 400-900 range). Last year, when popular Bollywood actress Kareena Kapoor walked the Lakme runway for Sabyasachi Mukherjee, the video of her appearance was viewed more than 90,000 times on the brand’s official Instagram page. The publicity is undeniable; the numbers speak for themselves.

Entertainment that boosts the bottom line

“Bollywood is easily accessible to us,” explains Jaspreet Chandok, vice president and head of fashion at IMG Reliance, one of the main organisers of Lakme Fashion Week. “We never push designers to get showstoppers but most designers feel that associating with them is valuable, which is why celebrities are seen on the ramp quite frequently.”

Designers’ relationships with their celebrity clients and muses have long been harnessed for marketing gain. However, things have changed since Jean Paul Gaultier cast Madonna in the 1990s — even since he sent Beth Ditto down the runway in 2011.

Today, these endorsements enable a brand to reach a larger audience by leveraging a celebrity’s social media following. This in turn significantly enhances a brand’s visibility. But does visibility necessarily equate to profitability?

“Most of my clientele look upon celluloid celebrities as fashion idols [so] it’s undeniable that the presence of celebrities in my shows has helped me personify unapologetic glamour,” says Indian designer Manish Malhotra, who has also been wardrobe designer for several top Bollywood movies . “Social media and e-commerce have considerably reduced the degrees of separation between a celebrity’s sartorial essentials and a client’s personal closet,” he adds.

In Pakistan, menswear label Republic regularly experiences a boost in business when actor Fawad Khan models in one of its shows. “People come [into the shops] on the day following the show with Khan’s images on their phones,” says designer Omar Farooq. “There’s no other celebrity that generates as much hype as him. The media and the masses love him and there’s no denying that he makes the clothes look good.” 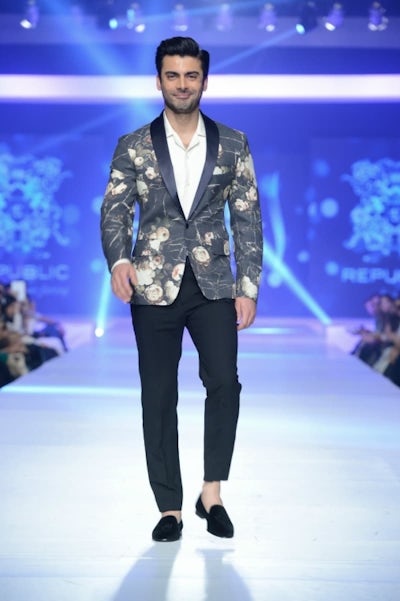 Anamika Khanna, who often dresses Indian actress Sonam Kapoor, is candid about the star’s impact on sales. “There is always an influx of orders for clothes that have been worn by a popular actress,” says the designer. “But I would never opt for a celebrity simply for publicity. Sonam features in my shows because I feel that she embodies my design philosophy and wears the clothes very well.”

There are plenty of other designers who have turned to the svelte, sartorially savvy actress, who is also a face of L’Oréal. Tarun Tahiliani recalls how a particular dhoti sari sold exceptionally well after Kapoor was seen wearing it. But he cautions that the success of catwalk celebrities “also depends on who the celebrity is and whether the styling has been done well.”

The impact of celebrity runway appearances around and beyond the Indian subcontinent is something that Tahiliani considers carefully. “It certainly helps if you have a globally recognised actress like Aishwarya Rai or Katrina Kaif on board. Even beyond India, the whole world takes notice,” he says.

But Malhotra warns that there is a limit to the ROI a brand can expect. “My business cannot be dependent on celebrities — although they do add drama,” he says. “A celebrity showstopper enables me to reach 100 people instead of 10, but the foundation of my label is based not on who’s seen wearing the clothes but on the design itself. Ultimately, there’s no substitute to a great product.”

IMG Reliance’s Chandok agrees that the marketing strategy can backfire. “A poor collection can never be salvaged just by a celebrity showstopper,” he says.

Industry leaders are quick to point to another risk of celebrity appearances: overkill. There are times when catwalks become so littered with celebrities that the entire effort loses impact. Last year in Pakistan, a single Bridal Couture Week show featured 17 stars, followed by at least one famous face in each of the other shows; actors, singers and even the odd renowned doctor.

“Film stars are possibly the worst thing that could happen to a show because they end up being the only thing that gets noticed by the press and everyone else. The actual collection, which should be the most important part of the show, gets completely sidelined,” says Indian designer Rohit Bal, whose shows often feature Bollywood’s biggest stars.

A poor collection can never be salvaged just by a celebrity showstopper.

“Ordinarily, I would never make a celebrity a part of my show and the only reason I end up doing so is that sponsors insist upon it. Most sponsors have brand ambassadors and it is considered imperative that they walk the ramp for us. So when Shah Rukh Khan is my showstopper, it is because Omega is sponsoring the show and he is their brand ambassador. If Kareena Kapoor is my showstopper, it’s because she is the face of Lakme and they are my sponsors.”

“Some exceptions are actor Arjun Rampal, who I often opt for, because he looks great, is an ex supermodel and one of my closest friends. I’ve also chosen to have Vijender Singh walk for me because he has won an Olympic medal for the country and adds value to my show. I agree that film stars generate a lot of publicity but I’m simply not looking for that. The only stars on the catwalk should be my designs.”

It is this commitment to spotlighting design that has lead the organisers of Colombo Fashion Week (CFW) in Sri Lanka to discourage the use of celebrities on the runway. “CFW is seriously committed to showcasing Sri Lankan fashion and doesn’t believe in providing entertainment,” says Fazeena Rajabdeen, chief executive of the event. “From time to time celebrity showstoppers have been seen on our runways but it is not something that we promote.” 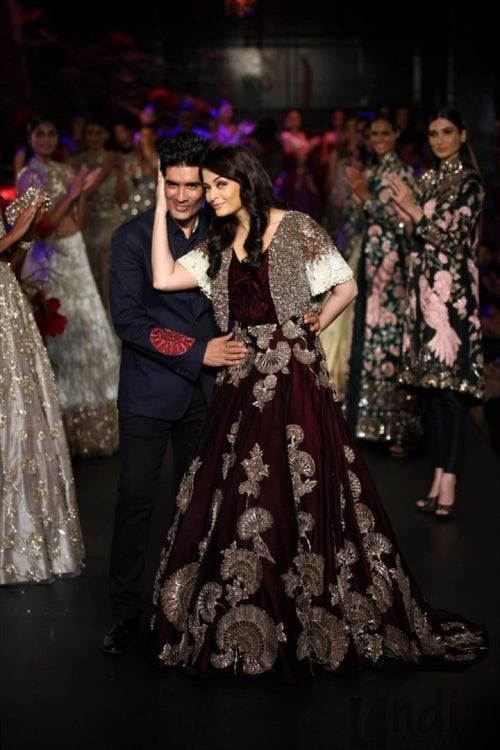 In Bangladesh, where fashion shows are fewer and TV dramas are watched avidly, many successful models maintain parallel careers as actresses and thereby become show highlights.

“Models like Emi, Sarika, Heera and Jannatul Peya are very popular because they are also television actresses,” says Fakrul Chowdhury, who helmed Dhaka Fashion Week until 2014. “Indian actresses are also seen at fashion shows in Bangladesh… [Brands] want the show to gain maximum mileage and the only time when [major media] truly covers fashion events in Bangladesh is when they see a celebrity on the catwalk. Sadly, the media [here] isn’t usually bothered with reviewing the fashion itself,” Chowdhury adds.

In Bangladesh, fashion provides even more entertainment value with traditional dances often taking place between shows or even continuing in the background while the models walk. In 2010, a show in Dhaka by designer Tootli Rahman charted the journey of the sari through the ages, beginning with a model climbing down from an elephant and accompanied by live dancing.

A platform for social issues

Similar to what was seen at the recent shows in New York, London, Milan and Paris, South Asian designers are becoming increasingly bold about using the catwalk as a platform for social and political messages. At Fashion Pakistan Week in November, gang rape survivor and women’s rights campaigner Mukhtar Mai was the focal point of designer Rozina Munib’s debut show.

Dressed in a shalwar kameez with her head covered, Mai stood at one end of the runway while models walked past her. When the designer took her bow, she took Mai by the hand and they walked the runway together.

“I could have spent an exorbitant amount on hiring a celebrity to be part of my show but then I decided that I would rather spend that money on flying Mukhtar into Karachi and bring people’s attention to her cause,” says Munib, whose show was covered by Vogue, the New York Times and the BBC.

“She had been facing difficulties in collecting funds for the charities that she runs and after the show she got the chance to meet potential donors… Mukhtar may have gotten me noticed, but personally, I was more interested in the message that she stood for.”