New York-based Derris has acquired London agency Sample as its clients seek growth outside the US market.

NEW YORK, United States — Derris, the communications agency behind a lengthy list of direct-to-consumer brands including Warby Parker, Everlane, Reformation and Glossier, is getting serious about the international market.

In January, it acquired London-based agency Sample, a boutique firm owned by veteran publicists Giorgina Whittaker and Naomi Meitiner, in a cash transaction. The company declined to disclose further details of the deal. Sample will be immediately rebranded as Derris.

The move underscores Derris’ intention to serve its clients globally as many of them seek growth abroad. (Razor brand Harry's and Glossier have both launched in the UK over the past year-and-a-half.)

Founded in 2013 by crisis communications expert and brand strategist Jesse Derris, who was joined soon after launch by Lisa Frank, the agency began by working almost exclusively with direct-to-consumer brands, starting with Warby Parker. (A third partner, Julie Halpin, exited the business in 2018.)

“To be very frank, it’s a rare combination to have an understanding of brand and to also understand business,” said Warby Parker co-chief executive Neil Blumenthal. “It’s rare in many vendors, but especially in communications and strategy firms.” 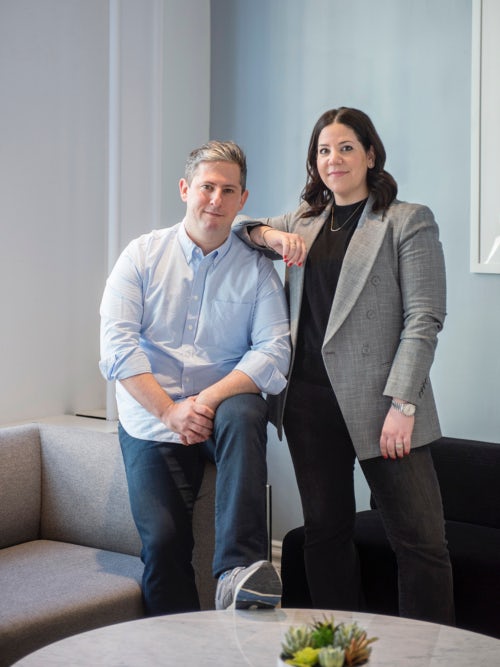 Blumenthal knew both business partners personally before co-founding the disruptive eyewear brand and informally sought their individual advice for several years before the two met and the agency opened. Derris, who previously worked at strategy firm Sunshine Sachs, was also an early stage investor in Warby Parker.

The firm’s second client was shaving brand Harry’s — started by Warby co-founder Jeff Raider. Then came Everlane, the millennial generation’s answer to the Gap. As digital-first product startups proliferated, with brands dubbing themselves as the “Warby Parker of X” emerging in nearly every consumer category, Derris itself became the disruptor of its own industry: the go-to communications agency for upstart brands looking to get the word out to the masses, and a promising new option for traditional brands looking to shake up their dusty strategies.

In recent years, Derris has launched men’s and women’s personal care brands Hims and Hers, women’s shaving label Flamingo — an offshoot of Harry’s — as well reproductive care line Lola, co-founded by Derris’ wife, Jordana Kier. At the end of 2018, the firm began working with Butterfly, a handheld ultrasound tool.

While Derris offers all the traditional trappings of what constitutes a modern PR firm — sample trafficking, building editor-brand relationships, engaging influencers and creating native content — it also works in a consultative fashion, sometimes tapped to advise on one-off projects or in-depth launch strategies.

Early on, the company also negotiated equity stakes in many of the brands it represented, including Everlane, which might not have been able to afford a hefty monthly retainer. “You want them to be part of the story in a big way,” said chief executive Michael Preysman. “They’re an extension of us.”

In 2017, Derris launched Amity Supply, a $10 million fund backed by American real estate developer Stephen M. Ross, the founder of Related Companies (the firm behind Hudson Yards and another Derris client), to invest in pre-launch startups. (The first investment was in Hims, which will be valued at $1 billion in its next funding around, according to a report in Recode.)

This hybrid model is something few of Derris’ competitors have been able to replicate, but there is a surge of agencies, new and old, promising a similarly holistic approach to communications. In the US, these include Jennifer Bett Communications, which represents brands like Stock X and Parachute Home, as well as Moxie Communications, which supports mattress brand Casper and Harry's competitor Dollar Shave Club. Fashion firm Black Frame has diversified by building a creative agency that strategically advises many of its PR clients, including Kenzo and Helmut Lang.

Derris welcomes the competition. “From a baseline perspective, we think it’s great,” he said. “We are also are pretty obsessive about what’s going to happen next as opposed to what’s happened before—I don’t think either of us are interested in trying to recreate the things we’ve done in the past.”

Now the incumbent, Derris has attempted to future-proof itself by funding pre-launch startups — like it did with Hims in 2017 — embedding in their process from the beginning.

As for the now-maturing brands the agency helped shape? For many, international expansion is a crucial next step.

Frank and Derris met Sample’s Whittaker and Meitiner when the firm launched Harry’s in the UK, and it soon became clear that an integrated partnership would be beneficial to both companies. Sample, which was founded in 2015, is looking to scale its business; Derris, which employs 80 people and has ambitions to add 20 more positions by the end of 2019, offers the infrastructure.

Expanding outside the US is potentially a big financial opportunity, but also potentially a disaster if not executive properly. Having local market expertise is a reassuring prospect.