The Year Ahead: Are You Ready for Next Generation Social Networks?

As traditional engagement models struggle on established social media platforms, fashion players will need to rethink their strategy and find ways to maximise their return on marketing spend.

LONDON, United Kingdom —  The collective reach of the social media giants is staggering. Facebook reported 2.5 billion monthly active users in September 2019, and both Instagram and WeChat have more than a billion users each. Yet, growth seems to be slowing and users are spending less time on some of the major platforms: in the US, average daily time on Facebook fell to 37 minutes a day from 41 minutes in 2017.

Stagnating enthusiasm has not stopped advertising rates and revenues rising at the big platforms. According to one report, the average digital ad cost has risen 12 percent in two years, but digital ad expenditure rose 42 percent, helping analysts forecast Facebook’s revenue in 2019 above $69 billion at the time of writing, up 70 percent from 2017 and equal to all print media ad spending. However, visits to those advertisers on social media have risen only 11 percent.

The challenge is that advertising overload might be hurting engagement. Global consumer-goods giant P&G discovered that people spent less than two seconds on average looking at its ads on mobile feeds — and that those ads appeared too often. Chief brand officer Marc Pritchard explained in the Wall Street Journal, “We’re trying to reduce the amount of times we reach the same person over and over again.”

The data suggests that it is time for brands to rethink their social media strategy. Specifically, they need to re-evaluate how to exploit existing platforms more effectively, capitalise on the rise of new platforms and understand how to generate direct sales through social platforms.

The typical route to reach a large audience on existing platforms such as Instagram is to either build followers organically or borrow followers using influencers — both these routes are starting to wobble. UK cosmetics company Lush realised that its organic newsfeed content reached only 6 percent of its online followers and became tired of fighting the platforms’ own advertising algorithms. It decided to shut down its social media accounts to regain ownership of its communication by relying on brand-owned channels instead. While this may be an extreme step to take, it demonstrates the lengths that some brands are willing to go to try to overcome current challenges on social media.

The harsh reality is that it is increasingly hard to excite and inspire audiences who are overwhelmed and overstimulated.

While an incredible 86 percent of companies use influencer marketing, the engagement rate for such sponsored posts on Instagram dropped from 4 percent in Q1 2016 to 2.4 percent in Q1 2019. Facebook’s and Twitter’s numbers are even worse at 0.37 percent and 0.05 percent respectively. The harsh reality is that it is increasingly hard to excite and inspire audiences who are overwhelmed and overstimulated. Going forward, a static image displaying a product with a model or influencer will no longer cut it. Industry executives believe that the top trend shaping the fashion industry within the next 12 months will be a rise in the importance of “storytelling” and marketing strategies that resemble media productions.

Arnold Ma, chief executive of creative digital agency Qumin, suggests players should move up the influencer funnel, partnering with individuals or other brands who truly live the lifestyle and can tell an authentic story, rather than blindly paying popular more generic influencers to promote their products.

Ralph Lauren adopted this approach when it worked with fashion publication Highsnobiety for its 50th anniversary. The published advertorial followed the impact the brand had on designers, collectors and the fashion industry from the Ivy League to the streets of Brooklyn.

Another tactic to grab consumers’ attention is to use social media to tap into the drop culture typically associated with streetwear labels. Consumers’ desire to be in the know and to have an exclusive product drives a large part of the purchase. Last year, for example, Burberry released a limited-edition Ricardo Tisci T-shirt available only on Instagram and WeChat for 24 hours. The company used the hype around this drop to release more limited-edition designs available on social media or exclusively in its London flagship store for just 24 hours. 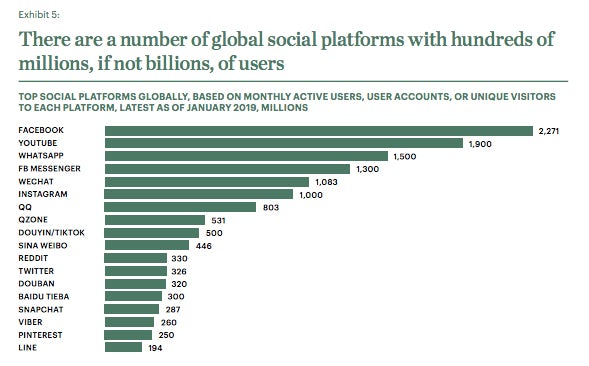 As data shows, it is getting harder to stand out in established social media. Fashion players need to understand how to gain traction on newer platforms. 70 percent of fashion executives believe that increased exploration of and spend
on new media platforms versus more “traditional” platforms will be crucial to their companies. At the same time, executives are showing hesitation, and only 8 percent are choosing to increase spend on TikTok, the biggest emerging platform with more than 800 million downloads and a user base skewed under 30.

Creating convincing content is critical on a platform like TikTok: the landing page is a constant stream of short videos sourced globally and compiled by artificial intelligence.

This approach challenges the traditional view of the need to build an audience, but does require extremely high-quality content to stand out. Not that brands always need to create this content themselves. Uniqlo appealed to TikTok users to upload videos of themselves wearing their favourite item from the company’s UT line. The best videos appeared on monitors in Uniqlo stores around the world.

There are many other emerging social media networks, including those focused on gaming such as Fortnite or Tencent’s mobile game Honour of Kings, which have fast become integral to youth culture. Fortnite has more than 200 million users and is free to play, but made a sizeable chunk of its $2.4 billion in revenue last year by selling avatar skins. Nike was quick to see the potential and started selling branded skins on the platform. In China, brands such as Mac Cosmetics, L’Oréal and Hong Kong jeweller Chow Sang Sang have all partnered with Honour of Kings, which has more than 200 million registered players of whom more than half are female (and women mobile gamers are 79 percent more likely to make an in-app purchase).

Ultimately, all the content creation needs to lead to sales, and social commerce is growing fast. By 2023, it could account for a fifth of all online sales in China — a staggering $166 billion. Brands are cooperating with social-media messaging super-apps such as WeChat, livestreaming platforms such as Yizhibo and Kuaishou and social-commerce platforms such as Xiaohongshu
to introduce and sell products.

Ultimately, all the content creation needs to lead to sales, and social commerce is growing fast.

Other social media platforms have been progressively incorporating commercial functions. Pinterest has its catalogue, while Instagram has evolved its checkout and augmented reality functions, letting customers “try-on” Ray Ban glasses or Mac lipstick. A wide range of messenger apps use chatbots to generate direct sales rather than just serving as a customer service channel. Nowhere, however, is as advanced in social commerce as China.

One app that may offer us a glimpse into the future is Douyin, TikTok’s counterpart in China. Douyin, which is extremely popular with young people, has just launched a game-changing in-video search function through which users can zoom in on clothing, or other items in the video, and link through to related content and even directly purchase products — all from within the app. These are not videos that are actively selling or promoting products, but rather regular user generated content — any post from anybody could become a potential sale.

Overall, in light of consumers’ growing apathy — and sometimes antipathy — towards traditional social media advertising models, we expect fashion brands in 2020 to significantly re-evaluate their strategies in a quest for meaningful returns. This means having a deep understanding of which platforms and networks their target consumers are engaging with, both in terms of region and demographics. Brands will start to establish content creation as a discipline within their organisation, focusing on engaging and tailored content that can work across a range of channels. Brands must also be prepared to exploit the new sales-orientated functions of platforms, as well as develop chatbots in combination with messenger apps to generate more immediate online sales.

At the time of writing, TikTok was said to be under national security review in the United States.