COLUMBUS, United States — There was hardly any public mourning when Victoria’s Secret announced last week that it would no longer air its annual fashion show on network television.

The general indifference to the end of a nearly 20-year, and once immensely popular, corporate tradition is a sign of how far America’s biggest lingerie retailer has fallen. Once widely considered a fun romp featuring the most-beloved models of the moment, the reputation of the Victoria’s Secret fashion show, which first aired in 2001, has diminished along with the brand itself as social mores have changed. Last year’s broadcast received the lowest ever ratings of 3.3 million viewers, down by about two-thirds since 2014, according to Nielsen. Coverage of recent editions has focused on the lack of diversity in the show’s cast of “Angels” and related charges of cultural appropriation and general objectification of women.

Cancelling the broadcast is a smart move. But Victoria’s Secret needs a Plan B. The brand is still far and away the dominant player in the US lingerie market and is seeing growth in China. But its position is under threat from challengers like ThirdLove, Rihanna’s Savage x Fenty line and American Eagle’s Aerie. All three have set themselves up as the anti-Victoria’s Secret, earning accolades for body-positive marketing.

Earlier this year, L Brands Chief Financial Officer Stuart Burgdoerfer said in the company’s fourth-quarter earnings call that the company has “an ongoing mindset of everything is on the table for review and change,” and the broadcast’s cancellation is a clear sign the executive team is embracing that philosophy. But to win back alienated customers and recruit new ones, Victoria’s Secret will need to completely re-engineer its marketing, image and product lineup.

Increase diversity off the runway, too. The fashion show has become a magnet for negative publicity in part because it reinforces many consumers’ problems with the products on sale in Victoria’s Secret stores.

In April, retail research platform Edited found that Victoria’s Secret offered a less-diverse range of skin-coloured bra options than Savage x Fenty, Aerie or ThirdLove. The brand also offers the smallest size range for its bras, maxing out at size 40DDD, compared with 48H at ThirdLove and 44DD at Savage X Fenty (though sizing is far from standardized across the industry.)

A marketing strategy that focuses on diversity is only as good as a product range that reflects that shift. Victoria’s Secret needs to offer more sizes, as well as colourways that appeal to racially diverse consumers.

Account for changing consumer tastes. Victoria’s Secret still sells plenty of push-up bras, but the company’s sales, down to $7.4 billion in fiscal 2018 from $7.8 billion in 2016, indicates consumers now prefer other styles. While Victoria’s Secret does make bralettes, the company has been slow to other consumer trends. Women increasingly prefer “comfortable” over “sexy” when it comes to underwear and bras, and “granny panties” have transformed from faux pas to fashion statement. Sales of thongs, a fixture in Victoria’s Secret’s late 1990s/early 2000s heyday, have decreased steadily. 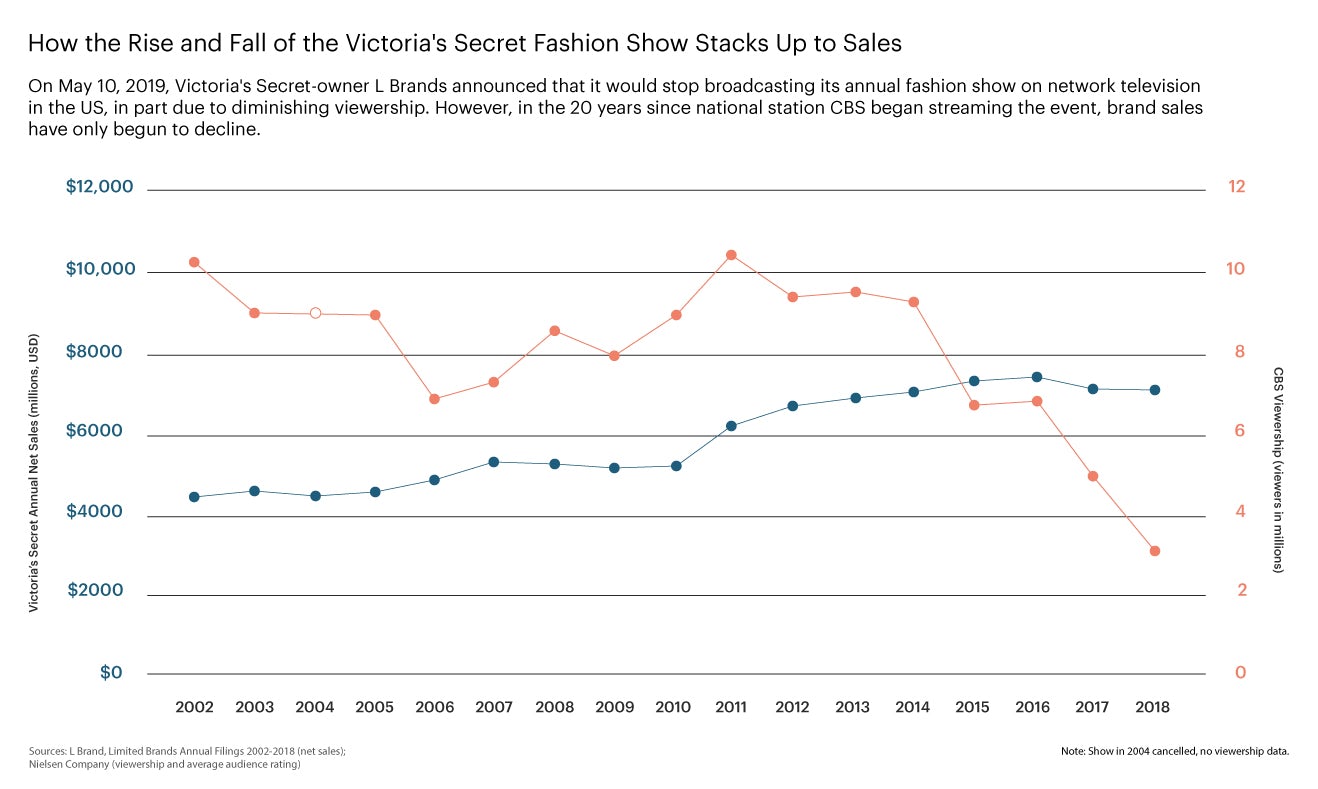 With 1,098 stores, the company has the perfect platform to launch new products, said Charcy Evers, who offers forecasting and consulting services to retailers across the country.

“Since they have that brick-and-mortar format, they could go back to it and create this nice, lovely bra shop, where you’re buying undergarments and you’re being properly fitted for them,” she said. “At a store level, there could be a way for Victoria’s Secret to create a nice environment to shop in, but they have to take this overtly sexy, ‘I’m doing it because I want attention or a man’s attention’ sentiment out of that environment.”

In 2018, Victoria's Secret earned $219.3 million in earned media value (EMV), a metric for measuring social media performance, an 11 percent decline from the previous year, according to San Francisco-based software company Tribe Dynamics. Meanwhile, startup ThirdLove saw a 62 percent increase in EMV over the same period, to $3.5 million. (Savage x Fenty and Aerie’s EMVs for 2018 were $24.9 million and $48.5 million, respectively.)

In short, Victoria’s Secret’s might have the mega-following, but that audience isn’t liking, commenting on or sharing posts at the same rate as its smaller rivals. That means they’re less likely to buy the products on display as well.

Victoria’s Secret also depends on its annual fashion show to drive consumer interest in the brand on social media. The month of November alone, when the annual fashion show and accompanying content airs, accounts for 38 percent of the brand’s annual EMV. Increasingly, however, more successful brands try to generate year-round engagement, rather than relying on one-time spikes, Begley said.

The brand relies on its Angels - typically internationally famous models, some with millions of Instagram followers. But it could benefit from hiring strategic influencers, who may have smaller followings but could serve as a bridge to customers outside the Angels’ largely thin and white mould. While mega influencers are great at building brand awareness, smaller-tiered talent are often adept at driving purchases, especially in Victoria’s Secret’s price range. Savage x Fenty has itself adopted that strategy, regularly featuring talent on their main Instagram feed that has fewer than even 5,000 followers. 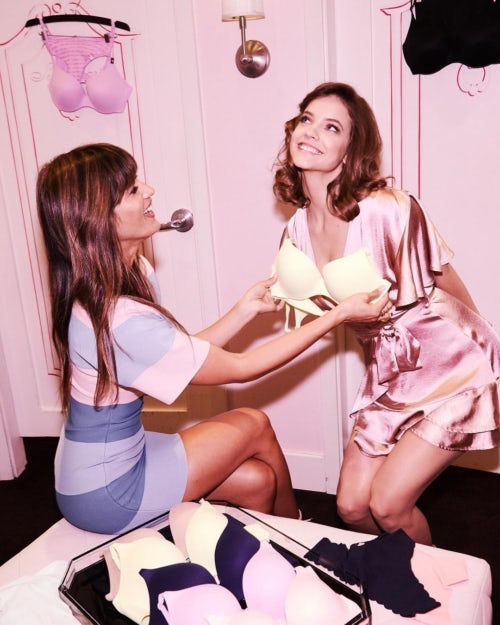 Engage with YouTube’s robust community. Victoria’s Secret generates 77 percent of its EMV from Instagram, according to Tribe Dynamics. It might consider dedicating more energy to improving its presence on YouTube, where members of Gen Z spend much of their free time.

Plenty of Victoria’s Secret model-cum-influencers already have their own YouTube channels, including model Sanne Vloet (645,000 subscribers) and Romee Strijd (889,000 subscribers), and the brand could easily work with them to cross-promote content. While those models do have Victoria’s Secret-themed videos, they are mainly concerned with how they prepare for the big annual show.

Of course, the Internet has a near insatiable appetite for bra and lingerie content, not all of it sexualized. On YouTube, the most successful videos under the search term “bra shopping” explore the topic of bra fittings, and garner tens of millions of views each. The videos in this category with the highest view counts are created by publishers like Buzzfeed, with one that tests bras from Amazon.

But Creative Director Edward Razek, who infamously told Vogue in November that there wasn’t room in the brand’s shows for transgender or plus-size models, remains. And Wexner still calls the shots at the brand he built into a global empire over three-plus decades.

“There should’ve been a big change after that whole debacle in November with Ed Razek and the comments about transgender models,” Evers said. “If they did something, or do something now, it could be used as a force for good to bring themselves into the present to create change in a positive way, to tie in the idea of inclusivity.

She said the brand needs to “get some women in there who are willing to go in and turn things around.”

“It’s time to say goodbye to [the runway show,] let’s not think about another iteration but rather another way to reach an audience,” Evers said.