In the next instalment of Cover Stories, we explore the story behind the making of the June cover of American Elle and how the title tapped Hedi Slimane to give Angelina Jolie just the right fashion edge to generate plenty of positive buzz for the magazine, the designer and the actress, just before the debut of her latest film.

NEW YORK, United States — What are the elements of a successful magazine cover? The right celebrity? A great photographer? A provocative statement? Strong styling? A smart seeding strategy? The cover of American Elle’s June 2014 issue seems to have ticked all the boxes.

Images of the cover, featuring actress Angelina Jolie shot by Saint Laurent creative director Hedi Slimane, were first released by Elle’s PR team on May 7th, almost two weeks before the magazine was set to hit newsstands. And so far, the strategy seems to have worked, generating more than 200 news stories, according to a Google search, as well as thousands of social media shares. 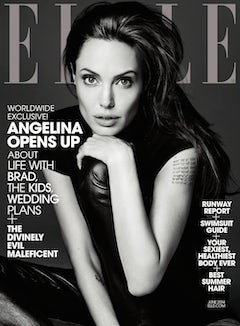 For Roberta “Robbie” Myers, Elle’s editor-in-chief, a successful cover is one that people won’t stop talking about. “I’m always satisfied and happy when people are talking,” she says.

To ensure Elle achieves this kind of buzz, her team begins thinking about possible cover subjects months — sometimes years — before an issue’s publication date. The negotiations are different for every cover, but they typically require the magazine’s entertainment director to convince a celebrity’s publicist that they are the right publication to present a given star at that moment of their career. Sometimes persuading them is easy. Other times it’s not. And, depending on the subject, there may also be the thorny issue of approvals to discuss (every magazine has a different policy, but some are known to give top celebrities final approval over images). Celebrities can also stipulate things like making sure the beauty brand they are representing is mentioned in the credits.

The complexities of these kinds of negotiations, plus the realities of long lead times for print, mean editors, who need to anticipate who their audience will want to read about by the time an issue finally comes out, must learn to look into the future. “It’s all about looking forward — sometimes six months, sometimes a year, sometimes two years — to see what is going to be happening in the culture. We put women on the cover who are making the culture,” says Myers. In this case, she and her team started talks with Jolie and Disney — the studio behind Jolie’s new film, Maleficent, which opens days after Elle’s June issue drops — more than six months ago.

Securing major magazine covers is a critical part of marketing any big-budget film and studios must be strategic about which publications to partner with. To snag Jolie, Elle offered global reach — more than 20 international editions of Elle are scheduled to run the 16-page cover story. “The fact that Elle is a global brand with more international editions than any other fashion magazine brand created an opportunity for Angelina and Disney to do one shoot and reach every time zone in the world,” says Myers. Elle also held out the promise of working with Slimane, who has photographed Jolie privately in the past and frequently dresses her for red carpet appearances. For some time, Slimane had been in talks with Joe Zee, Elle’s creative director, about doing a special project for the magazine. And this one had the right appeal.

“It’s about a woman really in control of her life,” says Myers on the cover story, photographed by Slimane and written by deputy editor Maggie Bullock. “[Jolie] is firing on all levels: intellectually, emotionally, work, children.” But, crucially, the idea was also to portray Jolie, not only as a strong and multi-faceted woman, but also as a lover of fashion, the kind of thing that can help position popular actresses for lucrative business deals. (Jolie recently collaborated with Stella McCartney on a line of children’s clothes pegged to Maleficent and, last year, launched her own jewellery collection, Style of Jolie, with Robert Procop.)

For what was a rare black-and-white shoot, Slimane created several custom pieces for the actress to wear. “It’s been a really long time since she’s been shot in this way,” says Myers. “Often you’ll see her on the red carpet, or you’ll see her in the tabloids surrounded by her children. It’s exciting to get her in this kind of fashion.”

Of course, Jolie is also one of the most famous women in the world, which certainly won’t hurt Elle’s sales at the newsstand. In 2013, the best-selling covers of American women’s magazines featured Kim Kardashian, Drew Barrymore, Jennifer Lawrence and other mega-celebrities. These days, fashion models, who once ruled magazine covers, are rarely featured. “I think celebrities are more knowable in a way. We can project more on to them and people feel very familiar with them,” says Myers. “That said, I think featuring a mix of celebrities and models is important. Fashion is defined as 'that which is current,' so even though the culture has become more celebrity-obsessed over the past decade, models are at the heart of the fashion industry. We always put women on our covers who are at an inflection point in their lives, professionally or personally. We had [model] Joan Smalls on [the cover in] January and the response was incredible.”

In the end, the Jolie cover works because it follows a powerful formula without feeling formulaic. “You rarely see a black-and-white cover on a newsstand. And Hedi is such an amazing photographer; he captures not only [Jolie’s] beauty, but also her fierce strength and intelligence,” says Myers. “We let the image speak for itself. We didn't load it up with cover lines. It's just a beautiful thing to look at.”

Disclosure: Lauren Sherman is a contributor to Elle’s website, Elle.com.