BERLIN, Germany — As the print advertising market continues to shrink, more and more media companies are trying to leverage their authority to sell the kinds of physical goods they often cover through product recommendations, collaborations, licensing agreements and, for an ambitious few, independent apparel lines.

For one of fashion’s most influential cult publications, apparel has become more than a side project. Three years after the Berlin-based magazine 032c released its first logo t-shirt, the publication is set to generate €1.9 million ($2.2 million) in sales from its line of tops, jackets, socks and more in 2018, up from €900,000 ($1 million) in 2017. That’s more than twice as much revenue as the magazine itself. 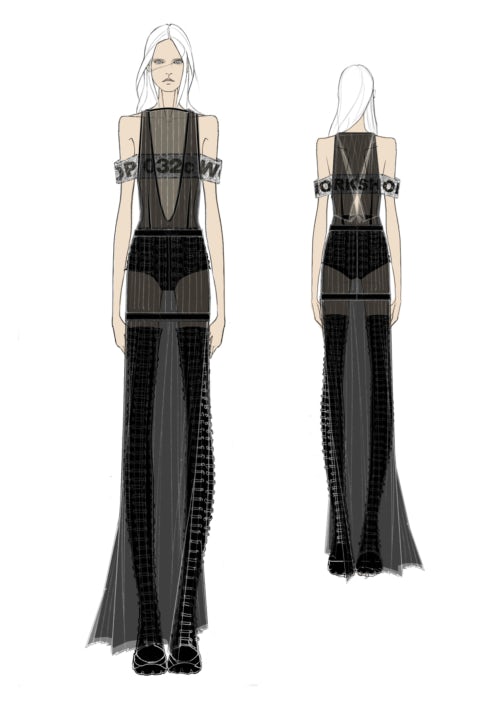 A sketch from the new 032c ready-to-wear collection | Source: Courtesy

Now, 032c is expanding its fashion business even further with the presentation of its first womenswear ready-to-wear line, set to take place in London on Monday night at the retail, office and exhibition space, 180 The Strand, which is also home to Dazed Media, IMG Models London, The Store and others. The event will be 032c’s second fashion presentation — last January, the brand presented its first full men’s collection at Florence’s Pitti Uomo trade show — but its first go at a more elevated fashion offering.

Founder and editor-in-chief Joerg Koch said it has long been his goal, and the goal of his wife and 032c’s creative director Maria Koch, to create what he called a “proper fashion line.” It’s a strategy they have pushed over the last year, hiring talent and setting up manufacturing infrastructure that can handle rapid growth. “All this ambition should lead to a very serious ready-to-wear business,” said Maria Koch.

The company now has a fashion design team of 6 including Maria Koch, working on their existing lower-priced apparel line (technically menswear, but they consider it unisex, sold at 110 stockists) and the forthcoming women’s ready-to-wear collection, which will range in price from about $400 to $2,000, and have more limited distribution. A new addition to the design team is senior womenswear designer Felix Hupka, who has experience at Tom Ford and Givenchy. Both lines are styled by 032c fashion director Marc Goehring.

Ssense, the Montreal-based luxury and streetwear e-commerce site where Joerg Koch is also editor-in-chief, has been an important wholesale partner, placing significant orders early on. Other key stockists include Selfridges, Browns, Moscow’s KM20, GR8, The Webster, The Galleria in Seoul and Opening Ceremony.

The debut womenswear collection will hit stores in June on the traditional retail schedule, while the apparel line will start to drop in January and be released in smaller, limited installments more typical of streetwear labels.

The strategy appears to be working. 032c’s revenue from apparel outgrew the revenue generated by the magazine (about €800,000 annually from advertising, sales and subscriptions) in 2017. In its first year, 2016, the apparel line generated €350,000 in sales. Joerg Koch said the company is self-funded and wholly owned by himself and his wife, who are not interested in raising outside capital at the moment.

Maria Koch described the biannual print product as “the spine for the 032c body,” which will next year grow to include the first edition of a physical festival, Reference. The event was previously scheduled for October but was postponed after a change in direction. The brand’s next runway show will take place during the inaugural edition of the Reference festival in May, which 032c plans to follow with a show during Paris Fashion Week the following autumn.

The debut women’s ready-to-wear collection, which will be unveiled to the public on Monday (and then carried by about 30 of 032c's existing stockists) will be “sexy, very energetic and quite minimal,” said Maria Koch, adding that it is inspired by 1990s rave- and clubwear and feature more luxurious materials than the existing 032c apparel line. Not coincidentally, the next issue of 032c magazine will include a feature on the same subject.

Did the line inspire the feature? Or the other way around? The Kochs said it was all part of one creative conversation at 032c’s offices.

“Nobody has this — a huge research [source] just next door,” said Maria Koch. “They research nonstop and are able to give me very interesting information about what is going on and helping to define social and physical streams.”

The Magazine that Defied the Downturn

Welcome to the Big Flat Now