Known for her creative approach to photoshoots on tight budgets, Bailey announced her intentions to step down in mid-January after nearly two decades atop the masthead of the Hearst high-fashion magazine. When Bailey hosts events, as she has periodically in recent years in New York on the night before the Met Gala (rival Vogue’s territory), the likes of Valentino’s Pierpaolo Piccioli and actress Demi Moore regularly turn up. And they were in attendance again in Paris to honour Bailey and her new exhibit at the Musée des Arts Décoratifs.

Sitting nearby at the dinner in pride of place was Kristina O’Neill, the editor of WSJ. Magazine and formerly the executive editor at Harper’s Bazaar under Bailey. At one point, O’Neill was the magazine’s heir apparent, poised to take over one of the most powerful positions in American fashion whenever Bailey exited.

But times have changed. The publisher has struggled to find the right leader to follow in Bailey’s footsteps, according to multiple sources with knowledge of the hiring process, made more complicated also by fashion month travel and coronavirus concerns. Part of the problem is how she left: despite the fact that Bailey's exit was rumoured for years, it was sudden and unexpected, in contrast with the well-choreographed successions at other publications. When Anne Fulenwider exited Marie Claire in December, her departure and Aya Kanai’s elevation to editor-in-chief were part of the same announcement.

"Our search for the next editor-in-chief of Bazaar has been thoughtful and careful," said Chief Content Officer Kate Lewis, who closely oversees editors-in-chief, via email. "This brand is too beloved and we are happily taking our time. There is no need to rush the process."

Hearst is said to be closing in on a final candidate, but it won’t be O’Neill, or any of several other well-regarded editors-in-chief, including Laura Brown at InStyle (another former Bazaar editor) and Stella Bugbee at New York’s The Cut, who have taken themselves out of consideration. Vanity Fair Fashion Director Samira Nasr has been a frontrunner, but she is also no longer in talks. WSJ. Magazine Deputy Editor Elisa Lipsky-Karasz, HarpersBazaar.com's Executive Editorial Director Joyann King and former Vanity Fair Creative Director of Fashion and Style Jessica Diehl are among those said to still be under consideration.

People with knowledge of the search told BoF that the publisher is looking for an editor with a high-fashion sense of personal style, the gravitas to stand against Vogue’s Anna Wintour, digital experience and the charm to woo advertisers.

But finding such a person in this media environment is no easy task. While Harper’s Bazaar isn’t as big a moneymaker as Cosmopolitan or Elle, it is seen as a way to enhance Hearst’s reputation in luxury. Reports of several candidates turning it down undermine that position.

Another hurdle is the job’s salary, said to start between $200,000 and $250,000, less than the $1 million-plus commanded by a previous generation of editors-in-chief. The incoming editor is also expected to face editorial budget cuts and be asked to trim staff. 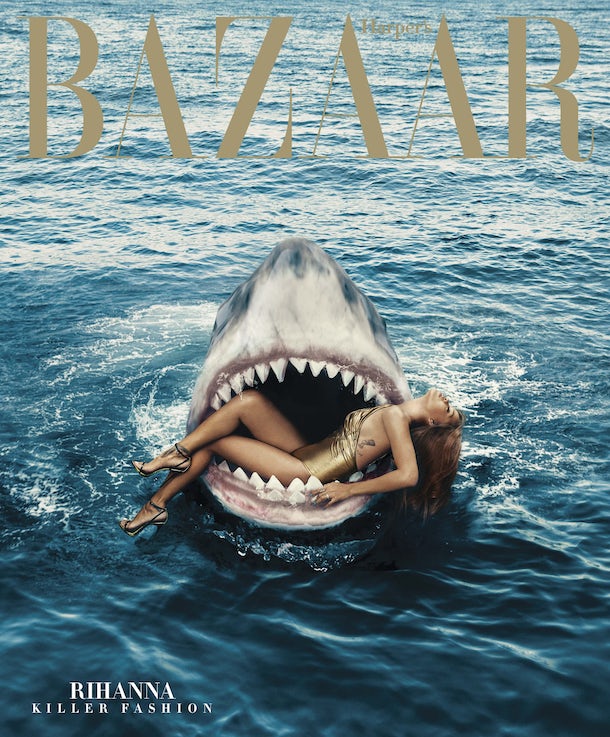 Rihanna on the cover of Harper's Bazaar in 2015 | Source: Courtesy

The new editor will also be joining the Hearst Magazines division during a difficult time. Magazines are just one sliver of the massive, privately held Hearst Corporation, which counts on other investments like its minority stake in ESPN as well as business and medical data companies for the majority of its revenue.

Troy Young, formerly head of digital media, took over as president from David Carey in 2018. Lewis had focused on the HR and operational side of media earlier in her career, and was Young’s deputy before taking on her new role, replacing Joanna Coles.

Since then, several other longstanding editors have left. At Cosmopolitan and Esquire, they were replaced with younger, digitally focused editors who had not previously led print magazines.

The company’s leadership was also reportedly caught off guard in November when 500 employees across 24 titles announced their intentions to form a union, which Hearst has not recognised. Negotiations have been tense, with Writers Guild of America, East accusing executives of pressuring employees to withdraw their cards. Hearst also created a glossy anti-union website.

“For me, it’s business as usual,” Lewis said in an email. “The editorial team has had a really strong start to the year in print, digital and video, which reflects what a connected and talented group of people work here.”

Longtime Elle columnist E. Jean Carroll made headlines in February when she spoke publicly about her contract not being renewed, which she tied to her decision to sue President Trump for allegedly raping her in the 1990s. Carroll went public with her allegations in New York Magazine rather than Elle. The New York Times later reported about Carroll’s exit from Elle in a story about other situations in which stories were killed or altered “to avoid ruffling feathers.”

A representative for Hearst told the New York Times, in a statement shared with BoF, that "the decision not to renew her contract was a business decision and had nothing to do with politics."

The End of a Magazine Era

Hearst’s internal drama might not matter to an editor who had dreamed her entire career of following in the footsteps of legendary Bazaar editor Liz Tilberis, who led the magazine from 1992 until her death from cancer in 1999.

But many of today’s editors have other aspirations.

The era of celebrity magazine editors has come to a close, with Wintour the exception that proves the rule. Bailey — who is close with the Hearst family through her relationship with Austin and Gabriela Hearst, a designer whom the editor has long championed — was one of the longest holdouts from the previous generation. Since 2015, editors with decade-long tenures have exited plum, masthead-topping roles at Elle, Cosmopolitan, Marie Claire, Glamour, Vanity Fair, Allure, GQ, InStyle and Esquire.

These editors were hired in a different era marked by seven-figure salaries, clothing allowances, round-the-clock drivers and other colourful, memoir-ready perks. They were larger-than-life personalities who embodied the aspirational lifestyle of their magazines’ pages and had the leverage to negotiate bonuses and favourable severance packages.

The financial challenges facing print publishers, including decreased readership and advertising as eyeballs and budgets shift online, made lavish editorial expenses unsustainable. The contrast between editors’ pay packages and the plight of entry-level assistants, who earn around $25,000, often with no health insurance, surely contributed to Hearst’s union drive.

Condé Nast and Hearst have cut photoshoot budgets and winnowed editorial teams, and many titles at both corporations share departments and key roles, like beauty director or celebrity booker. Bailey's print team has reduced in size by half since she joined Harper's Bazaar in 2001.

So the editor-in-chief business is likely to be a much younger person’s game moving forward, attracting people with less experience and more tolerance for the increased demands of the job — the pressure to make more content across more platforms with smaller budgets and smaller teams, under the glare of constant comparison to their predecessors.

Teen Vogue’s Lindsay Peoples Wagner is one example of this new kind of editor-in-chief. At only 29 years old, this role is unlikely to be the pinnacle of her career, but she has made it her own despite the challenges of print media. And she has flourished in the spotlight, expanding her personal profile with near-constant press coverage, including features in The New York Times and on ABC News.

But many more editors now prefer the freedom of freelance work, allowing them to build out their social media profiles without restrictions and take on consulting roles with brands and production companies. For example, former Cosmopolitan Fashion Market Director Shiona Turini left Hearst in 2014, and has since styled projects for Beyoncé and consulted with brands like Ferragamo. She counts 203,000 followers on Instagram.

Other editors aspire to work on fashion partnerships for tech giants like Instagram and YouTube, where Eva Chen and Derek Blasberg appear to be the only fashion content-creators left with never-ending budgets.

For its part, Hearst has embraced the end of the celebrity-editor era. Young told BoF last year that the “cult of the editor” is outdated. “I think the editor is still vitally important in steering a brand,” he said. “But it’s a time of more collaboration and new skills in understanding what the audiences are reacting to.”

Indeed, of the famous fashion editors at Hearst, only Elle’s Nina Garcia (of Project Runway fame) is left on the roster. She joined Hearst in 2008.

Inside and outside Hearst, decreased salaries and budget cuts are inevitable parts of working in fashion media. The business was overdue for a reality check and recalibration, and the transition’s challenges will likely continue as the final mega-editors exit the business. Whoever ends up leading Harper’s Bazaar into its next era will have to chart a new path forward.

The End of Fashion Establishment Gatekeepers