Hearst is trying to convince readers to pay for content by tapping into the subjects they’re most passionate about. Is the wedding market a good fit for this membership model?

The American upscale fashion title is introducing a subscription website as well as a premium tier that includes newsletters, videos and discounts. The vertical, called Bazaar Bride, is the first of its kind from publisher Hearst, which under new president Troy Young is trying to develop new sources of consumer revenue as print subscriptions decline and as Facebook and Google continue to dominate digital advertising dollars.

The newsletter series, available to subscribers who pay $90 for 12 weekly editions, includes advice from designers like Vera Wang, makeup artists such as Daniel Martin (who worked with Meghan Markle), wedding planners include Yifat Oren (whose client list includes Anne Hathaway), photographers such as Jose Villa (who documented Priyanka Chopra’s nuptials) and more vendors with A-list clientele. For subscribers who choose to forgo the newsletter, website access will cost $5 per month.

When it comes to wedding content, brides today have many free publications from which to choose. Readers looking for guidance and inspiration can find it everywhere from platforms like The Knot and Style Me Pretty to sophisticated niche blogs like Over the Moon and online registries like Zola. Plus, Instagram and Pinterest have a never-ending scroll of images for brides eager to see how their weddings will look on social media. Pinterest said that more 40 million people use the platform for wedding planning and inspiration.

“Before the age of digital, when a bride got engaged, their mother and their friends gave them a stack of magazines — for us, this is that stack, just elevated, curated and digital,” said Carrie Goldberg, Harper's Bazaar's weddings and travel editor who oversees editorial content at Bazaar Bride. 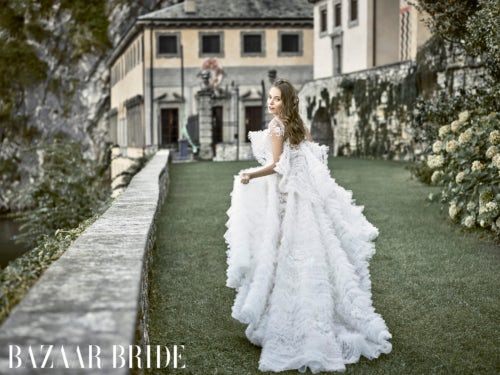 But from print to digital, the wedding media business has been challenged in recent years. Condé Nast is trying to sell Brides magazine. Last year, Oath shut down wedding blog Style Me Pretty, which at its peak averaged more than 18 million page views per month, and its founders reacquired the intellectual property and relaunched it. In June 2018, Martha Stewart Weddings shuttered its print edition and laid off 10 members of its staff.

And in September, rival wedding planning sites WeddingWire and XO Group (parent company of The Knot) announced plans to merge. The Knot was already shifting away from the media business before the deal: In 2013, 19 percent of its parent company’s revenue came from publishing activities; four years later it was down to 11 percent of total revenue, about $18 million. At the same time, most of the company’s growth came from listings of regional planners and vendors and from taking a cut of sales from registry services. The Knot averaged 10 million unique visitors per month in 2018, according to Comscore.

“There’s a shuttering and consolidating and shift happening in bridal,” said Jackie Courtney, founder of Nearly Newlywed, an online secondary marketplace for bridalwear and accessories. She cited retailer David’s Bridal filing for bankruptcy protection in November as one example. Many of the digital forces that have already wrought change in fashion, retail and media are coming to the bridal industry, she said, where they were delayed because customers do not have repeat purchases.

“Social media is driving such a change in the wedding industry,” said Sarah True, a Connecticut-based wedding planner and owner of True Event. She said Instagram has become the dominant platform even over Pinterest, based on her own clients. But sites like Style Me Pretty “still carry a lot of weight,” especially when it comes to images of real weddings. “Everybody wants to be able to see what [their wedding is] going to look like before it happens.”

Harper’s Bazaar sees an opportunity to offer brides something worth paying for online, or something for their friends and families to give them as an engagement gift. HarpersBazaar.com's executive director Joyann King said the publication’s focus on fashion-forward style for the bride during her entire wedding year — from bachelorette party to honeymoon — is a differentiator from other websites.

“Women are desperate to be the unconventional bride, they don’t want to look like a Pinterest faux pas,” she said.

But will Bazaar Bride be compelling enough for brides to pay for access with so much free content already available online?

True thinks it could be worthwhile for someone who isn’t already paying a planner for guidance.

But other virtual wedding planning services like Loverly, which launched in 2011 an raised $7 million in venture funding before restructuring and laying off staff in 2017, have failed to find traction.

“To have a paid element for that, you have to really be able to imbue it with something,” said Courtney. “I don’t know that anyone has really cracked that nut yet.”

Digital subscriptions are working for trade publications and titles that publish news and political coverage — see rising subscription rates for the New York Times, Washington Post and others — but research from Reuters indicates readers are less likely to pay for lifestyle and entertainment content online.

In September, Hearst introduced a membership offering for Runner’s World, which includes content and events. Another Hearst title, Esquire, has also put a paywall around political columnist Charlie Pierce’s articles online. In January, Hearst competitor Condé Nast announced plans to add digital paywalls across its titles in the United States, including Vogue and GQ.

Bazaar Bride made sense to the publisher because there was a “sticky” recurring audience with a specific passion point, said Brian Madden, Hearst Magazines' senior vice president of consumer revenue and development. The fashion title launched a bridal vertical online in January 2016, and said that a third of its audience there visits the site four or more times per month. HarpersBazaar.com averaged 14 million visitors per month in 2018, according to Comscore.

“I think we are still experimenting and looking at what’s working,” said Madden, adding that Hearst does not have a one-size-fits-all approach to paywalls across its titles. “We are thinking about — how do we find the content that we are creating that has really great resources, really great access?”