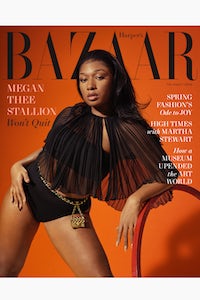 The newest issue of Harper’s Bazaar features a photograph of a pair of well-worn black Dior pumps, their frequent use visible by the slight fraying of the sole along the inside of one of the high heels. This exact pair isn’t for sale, a rarity in fashion magazines and particularly this one. But that isn’t the point of this particular article. Here they are shown as part of the real wardrobe of Chicago art dealer Mariane Ibrahim, who describes how the shoes give her confidence navigating the male- and white-dominated art world.

The approach is indicative of Samira Nasr’s Harper’s Bazaar.

“I don’t believe that our role is to suggest women reinvent their wardrobes every season,” said Nasr, who assumed the role of editor in chief in July, following a 19-year run by Glenda Bailey. “Our proposition is: build it, enjoy your clothes, wear them. You’ve invested in them. These are all sort of subtle shifts in how we broadcast luxury.”

Nasr’s pitch to Hearst was straightforward: keep the focus on high fashion but open up the definition of luxury — an interest in a beautifully constructed handbag goes hand-in-hand with an elevated curiosity about culture and stories of people who have been overlooked. She wants the magazine to feel more inclusive, both in what the reader sees and in who participates in its creation behind the scenes.

Many women’s publications are aiming to achieve the same kind of alchemy, with mixed results. It’s a heavy time, culturally and politically. Even though many fashion-focused publications have embraced political coverage with a progressive point of view, especially online, they’ve often struggled to strike the right tone. And they’ve faced harsh public scrutiny from employees and readers for being elitist and discriminatory.

Our proposition is: build it, enjoy your clothes, wear them. You’ve invested in them.

Hearst, which also owns Elle and Marie Claire, is entrusting Nasr with its most luxury-focused title whose median print reader is 42 years old with a household income of $197,000 — a compelling figure for brands looking for willing shoppers.

In its most recent incarnation, Bazaar’s shopping focus was its greatest differentiator on the market — that and cinematic, often kitschy editorials featuring, for example, Rihanna posing in a gold Chanel bathing suit in the open mouth of a shark. Inside, it was often hard to distinguish between the ads and the image-driven editorial pages.

Nasr enters her new role during one of the most uncertain times for magazines and fashion. Many of the brands that fund titles like Bazaar with their glossy ads are hurting as they seek to recover from the ongoing pandemic. Last year, Bazaar cut its print frequency from 10 issues a year to eight, but will back up to 10 in 2021.

Bazaar has largely avoided major internet-era scandals, though Hearst has had its fair share of turmoil in the last year. Former president Troy Young exited in July after the publication of a New York Times investigation into a history of inappropriate behaviour and the staff voted to form a union.

Chief financial officer Debi Chirichella took over Young’s role permanently in November. She announced increased investments in print, which still generates most of the revenue for Hearst Magazines, as well as new digital paid subscriptions across the portfolio. While Bazaar has an e-commerce shop and experimented with small paywall packages, the strategy is focused now on Nasr’s creative update. If she can reposition Bazaar as a modern publication that can draw cutting-edge talent and take risks, the celebrities, advertisers and readers may follow.

“I will never in my lifetime own a couture gown,” she said. “To me, luxury is choice. It’s, it’s having the choice to choose what you buy … choose how you move through the world.”

The sentiment echoes Nasr’s understated personality. She has been busy introducing herself, Bazaar’s first editor who identifies as a person of colour, through interviews including a profile in The Washington Post. While she is open about her background — raised in Montreal by Lebanese and Trinidadian parents — and how it impacts her worldview, she chooses not to share many details of her daily life or possessions on Instagram, for example, as has become popular among her peers. Even before Instagram, editors were expected to live the most aspirational lifestyle they projected in their pages. “I’m not super calculated about it,” Nasr said about her public persona, especially on Instagram. (Think fewer shots of celebrity-filled parties, more fashion shoots and house plants.) “I believe that women have been lied to for a long time. And I think we’re told that we’re supposed to be, look perfect, be perfect … have perfect families that look perfect all the time. And, okay, that’s really not what my life looks like. I’ve always been really dedicated to hard work, and I’ve always coloured outside the lines.”

Bazaar’s March issue is the first to fully reflect Nasr’s vision for the magazine. It features the chart-topping superstar Megan Thee Stallion, photographed by Collier Schorr and styled by Nasr in Chanel and Saint Laurent, with more natural makeup than she is often seen wearing on Instagram and in music videos. In an accompanying video, she filmed a conversation with US Rep. Maxine Waters.

Not all of the reaction online was positive, with some criticising the lighting and styling approach. “We purposefully captured another side of her, one that her fans are not used to seeing, which is reflected on both the cover and in the magazine,” said Nasr in a statement to BoF. She chose Schorr instead of a Black photographer because she wanted to see Megan through a “gay, female lens,” she told The Washington Post, and plans to work with Black photographers in the future.

Inside the pages of the March issue, the former go-to monthly themes around shopping or anti-ageing are gone. March is about “legacy,” a focus point that ties a profile of Martha Stewart with an examination of the state of American fashion. February centred on “community.”

Also missing: the twice-annual portfolio produced by editor Carine Roitfeld, who exited her role as Bazaar’s global fashion editor, one she had held since 2012.

Most of Nasr’s core team is new to the title, including creative director Laura Genninger, formerly of Another Man and i-D; executive editor Leah Chernikoff, formerly of Glossier and Elle.com; features director Kaitlyn Greenidge, a novelist and former contributor for The New York Times and Lenny Letter; and digital director Nikki Ogunnaike, formerly of GQ and Elle.com. They join holdovers from the Bailey era, including fashion director Nicole Fritton, who has been with the magazine for more than 15 years.

I wanted people who don’t have the same blind spots that I have.

“I wanted people who don’t have the same blind spots that I have,” said Nasr on her approach to hiring.

Inside, the issue has been redesigned to make more space for long written features, in a callback to Bazaar’s history of having published Virginia Woolf and Truman Capote. A new section called “Voices” will feature original essays by contemporary writers, with Greenidge contributing this time. Bazaar is hiring the kind of writers that come with their own passionate online followings, like E. Alex Jung, who wrote February’s cover profile on Aquafina, and Jada Yuan, who profiled Martha Stewart for March.

In its written features, Chernikoff hopes a sense of luxury will come through a considered approach, “really reflecting and trying to shape a piece or a reaction or something that feels more thoughtful and feels like it hasn’t been said a million times,” she said. Chernikoff wrote a piece for the issue about the Birkin bag and its cultural influence over rappers and socialites alike.

While the issue still dedicates plenty of space to the trends of the season like collared knits and Prada’s nylon slingback pumps, there are efforts to put fashion in a context closer to art, something to be appreciated and examined culturally. Another feature this month on clogs — including, the new Hermès clog, which has emerged as a seasonal “it” item — features New York chef Alex Raij proudly wearing her own pair of Danskos.

Another example of the new approach is a feature in the March issue, written by activist and scholar Salamishah Tillet, that spotlights Black female artists, including Naudline Pierre and Jordan Casteel, whose work has been championed by the Studio Museum in Harlem.

Politics will play a role in Bazaar, Nasr said, through a cultural lens, though it’s not yet clear how that will differ from the approach of its competitors. The title covered inauguration fashion closely, which contributed to a record traffic month in January, up 10 percent year-over-year with more than 20 million visitors.

“January just proves to us that our reader does care about something like that,” Ogunnaike said. Nasr said she would love to have a politician on the cover, especially because it would be surprising to the reader.

That choice may alienate some readers, depending on their political beliefs, who may find giving elected officials the magazine treatment off-putting. Nasr said she is mindful to respect the existing reader even as she brings about significant change across the entire publication.

“We’re going to misstep, maybe we’ll overshoot in one direction or maybe get it wrong in another,” she said. “But I think it’s only in the trying — trying new things, trying to find the balance — that we’ll find the sweet spot.”