Hodinkee Knows How to Talk to Watch Enthusiasts. Can It Attract Everyone Else?

The company’s new leadership says it’s not just for ‘watch nerds’ anymore and is introducing more ambitious editorial content while extending its reach in the secondhand marketplace.

Hodinkee Knows How to Talk to Watch Enthusiasts. Can It Attract Everyone Else?

The company’s new leadership says it’s not just for ‘watch nerds’ anymore and is introducing more ambitious editorial content while extending its reach in the secondhand marketplace.

Hodinkee has built a content and commerce empire around a small community of watch superfans. Fresh with new funding and new leadership, the company is betting it can get everyone else salivating over Rolexes and Seikos, too.

Online and off, the category has traditionally been the domain of a tight-knit community of enthusiasts and collectors, mostly men with the ability to shell out thousands of dollars on timepieces. Hodinkee, founded in 2008 by Ben Clymer, has traditionally catered to that demographic, with articles about all the latest releases and interviews with notable collectors.

But the market is changing. Even as smartwatches’ popularity continues to soar, younger, more diverse consumers are discovering traditional timepieces. Demand for women’s watches is growing, as are online sales of the watches, boosted by growing online communities.

“Only three years ago, this category was reserved for the watch nerds,” said Toby Bateman, Hodinkee’s chief executive. He added that over the last 12 to 18 months, the company has seen interest in watch content online explode. Its audience is global, the company said, but still 80 percent men.

In December, the company raised a $40 million Series B funding led by TCG with LVMH Luxury Ventures, among others, with a reported valuation of $100 million. At the same time, Clymer stepped down from the chief executive role, remaining executive chairman, with Bateman succeeding him. 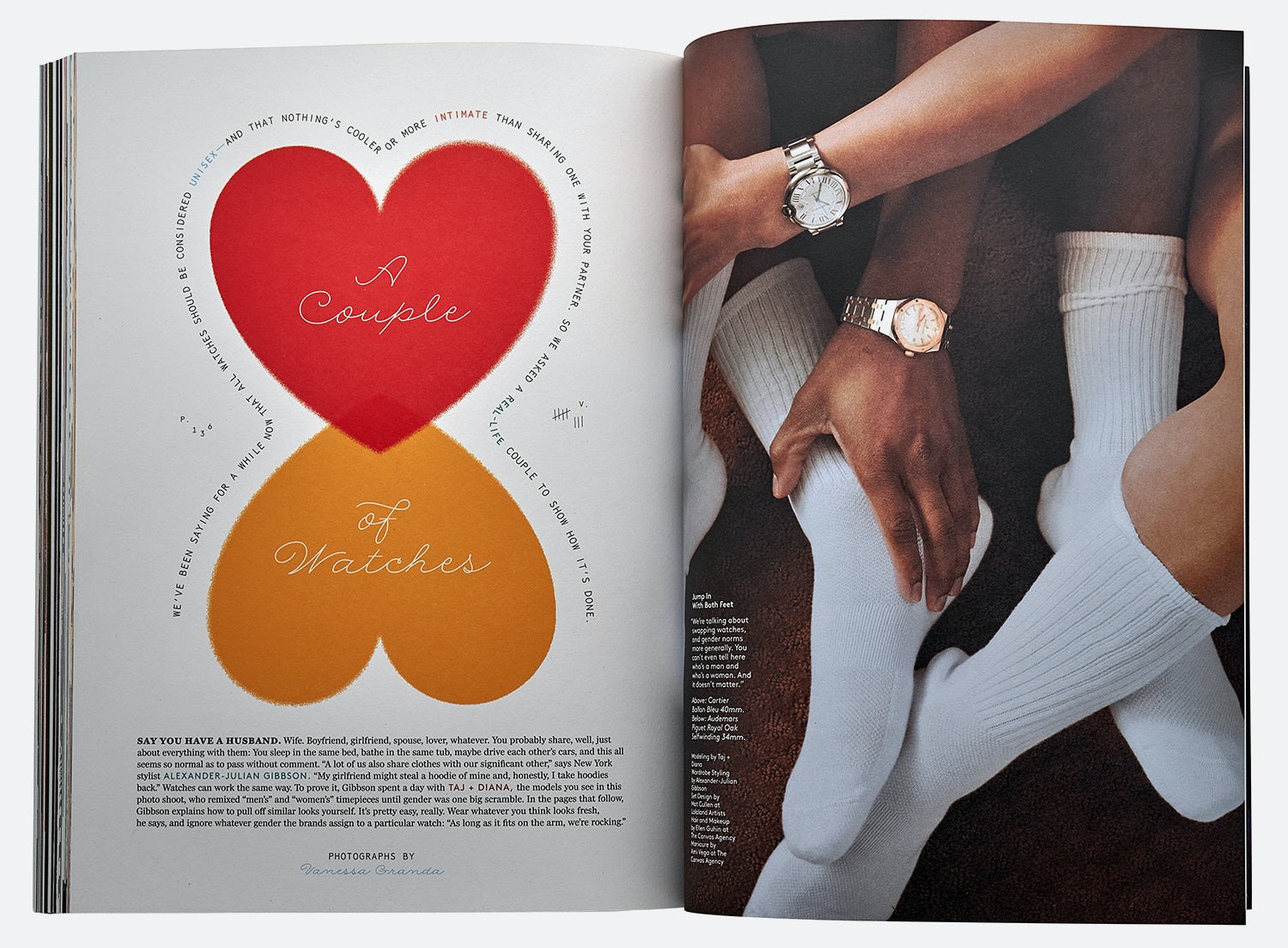 A feature from Hodinkee's 2021 issue. Hodinkee

Now Hodinkee is resetting its editorial strategy, widening the types of features it publishes and the kind of writers and photographers it works with.

On Tuesday, the company relaunched its twice-annual magazine, still product-focused but now packed with psychedelic illustrations, bold typography and the kind of photo stories featuring models and sets commonly found in fashion magazines. It includes a portfolio of portraits of hip hop icons like Jay-Z and DMX wearing high-end watches, photographed over decades by Jonathan Mannion, and a column by Austrian graphic designer Stefan Sagmeister on why timelessness is overrated. The cover features an image of an Omega Speedmaster 3861 exploding into all its component pieces.

“We’re trying to show Hodinkee in a way that people have never seen it before,” said Nick Marino, who joined the company as senior vice president of content in November, after roles at brands and publications, including Levi Strauss and GQ.

The shift has already started online, where in recent months Hodinkee has published personal columns on topics such as the outdated nature of the watch category’s gender divides (by Cara Barrett) and on the connection between watches and patriarchal values (by Mychal Denzel Smith), generating hundreds of comments from readers. Traffic from social media is up 22 percent year-to-date compared to last year, driven by Twitter and Instagram. (Hodinkee sees an average of more than 1.25 million users on its site per month.)

“That kind of engagement is a real secret to the company’s growth,” Marino said of Hodinkee’s active comments section, which has seen posts increase 15 percent year-over-year in 2021, and often sees editors responding to the conversation. While Hodinkee generates most of its revenue from the sale of watches, its editorial coverage of industry news and other products like podcasts and features keep its audience coming back.

Some of the feedback on the new columns was negative, however, as part of the core audience bristled against what they saw as an invasion of progressive politics, asking the site to “stick to watches.”

Hodinkee’s editorial focus is still on watches, said Marino, but from a larger context, adding that “the kind of traditional, old school Hodinkee storytelling that the base wants is still a part of the mix.” The new strategy is about adding expanding what it already publishes, he said.

“Anyone can rewrite a press release,” Marino said. “We want to start, facilitate and participate in a conversation that’s rich and deep and that makes people think differently about what’s on their wrist.”

The company, which employs 140 people across its e-commerce and editorial teams, is aiming to become more accessible in its product offering, too. In February, the company acquired online pre-owned watch retailer Crown & Caliber to extend its retail reach to younger customers and those with less income to spend.

“We’re starting to see, genuine signs of the audience becoming more diverse in terms of age, demographic, sex, diversity, all aspects,” Bateman said. “Not just that middle-aged, middle class, white guy with glasses and a beard.”

The Next Generation of Watch Buyers

The Luxury Watch Business Is in Trouble. Top Makers Have Some Solutions.