The rapper debuted his 10th studio album with a dramatic show that featured 5,000 dancers and bore the hallmarks of Balenciaga creative director Demna Gvasalia

The rapper debuted his 10th studio album with a dramatic show that featured 5,000 dancers and bore the hallmarks of Balenciaga creative director Demna Gvasalia

ATLANTA — Masked and wearing a bulletproof vest, Kanye West appeared on a small stage inside the Mercedes-Benz Stadium Thursday night to debut his long-awaited 10th album, Donda. A sparsely decorated bedroom scene set the tone, with two pairs of shoes and a spiked jacket from Balenciaga’s apocalyptic Autumn/Winter 2020 collection that saw models walk across a flooded runway at Paris Fashion Week in March 2020, just days before lockdowns took hold in Western Europe.

Reminiscent of the same show, West seemed to have travelled through hell and found redemption in the stadium, where he is rumoured to have lived for days while putting the finishing touches on Donda. He didn’t perform in the traditional sense, spending most of the evening circling the stage’s bed pantomiming, sometimes stopping to lie down or sit on its edge. The LED screen surrounding the stadium alternated between thundering clouds to sunny skies as almost 5,000 dancers filled the stadium around the small, gated stage.

Visuals and stage direction were borne from discussions about his mother, faith and the protection they offered, between West and Demna Gvasalia, the Balenciaga creative director who the rapper chose to produce the visuals and stage design for his show.

A post shared by The Business of Fashion (@bof)

Three waves of dancers filed into the stadium all dressed in varied monochromatic outfits — some in masks, others in bulletproof vests — symbolising West passing on the protection his mother gave him to the dancers circling the stage throughout the performance. At the end of the show, after dark and light, West was suspended high above the stadium, dangling above thousands before descending back to earth.

The highly-anticipated show was more than an album release. It also offered a lesson in fashion diplomacy, given the number of brand and designer collaborations the artist is pursuing — or rumoured to be pursuing — at the moment. The night provided a new look into the creative direction and mindset of both West and Gvasalia at a challenging time for fashion, as the two creative heavyweights combined forces.

Guests including Migos and Rick Ross were in attendance, along with several members of the Kardashian clan. Fans also dressed the part, covering an anthology of West’s design experience from early Nike collaborations to Jesus is King album merch.

In addition to the Balenciaga jacket, West also wore a black puffer jacket, a suspected item from the Yeezy Gap collection and the product of a multi-year partnership that’s expected to come out later this year. Gap’s collaboration with West is a bid to help the American brand regain its lost cultural relevance, with the company predicting the collaboration will generate more than $150 million in revenue in 2022. 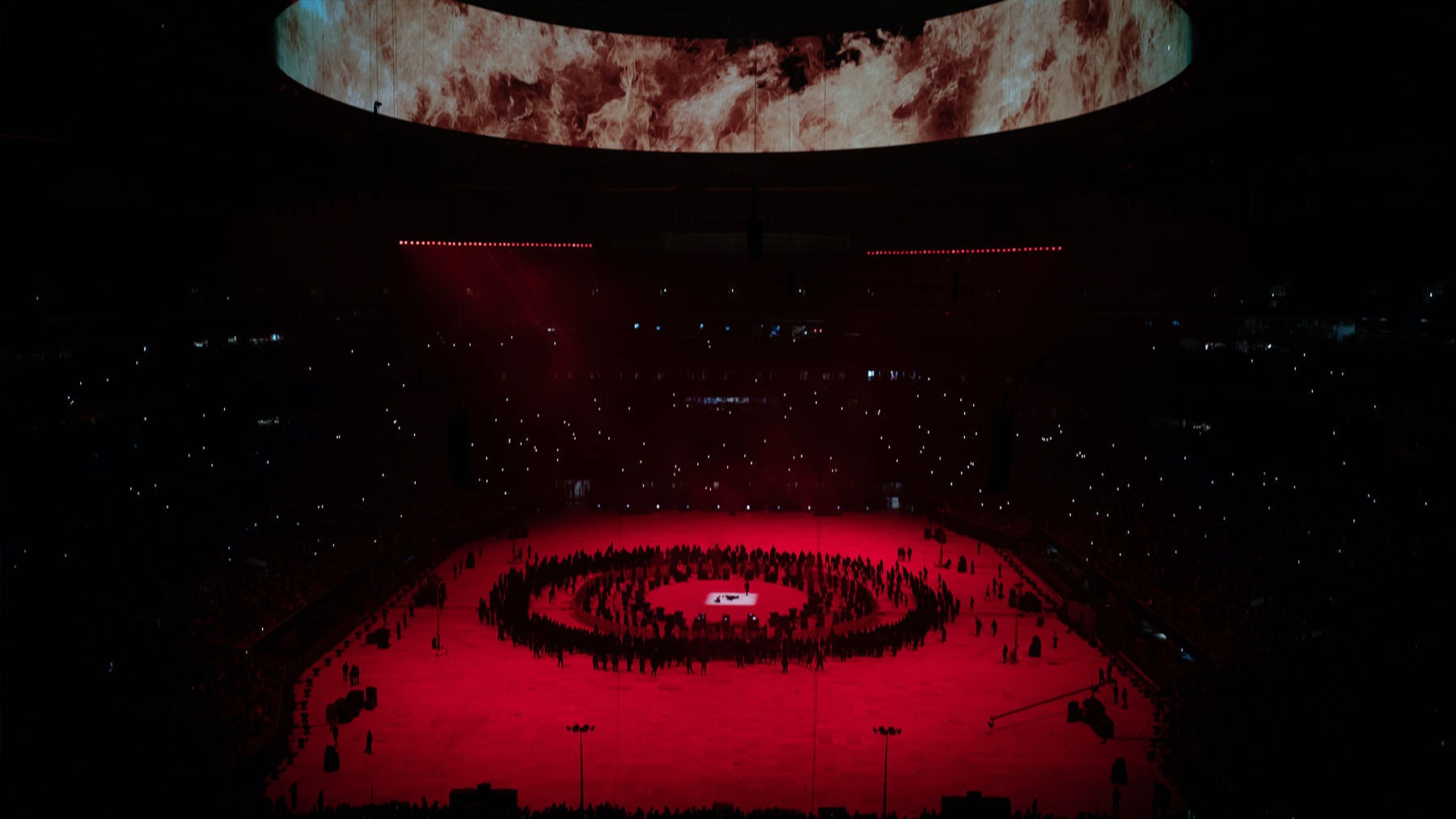 The LED screen surrounding the stadium alternated between thundering clouds to sunny skies as almost 5,000 dancers filled the stadium around the small, gated stage for Kanye West's show. Courtesy.

At midnight, Yeezy Gap’s website released a preorder form for a red version of the jacket, which debuted earlier this year as the collaboration’s first product, and which West wore at his previous Donda performance two weeks ago. It’s scheduled to ship in the spring of 2022.

The event was the culmination of the kind of quixotic album release cycle West has become known for, punctuated by viral social media posts, technical difficulties and confused fans. Almost two weeks ago, he hosted thousands of attendees at an album listening party at the same Atlanta venue, sharing various snippets of the album — some finalised only hours before. Originally expected to be released that night, the album wasn’t finished in time and failed to show up on streaming platforms at midnight. A representative for West later shared that the release date had been moved to August 6. 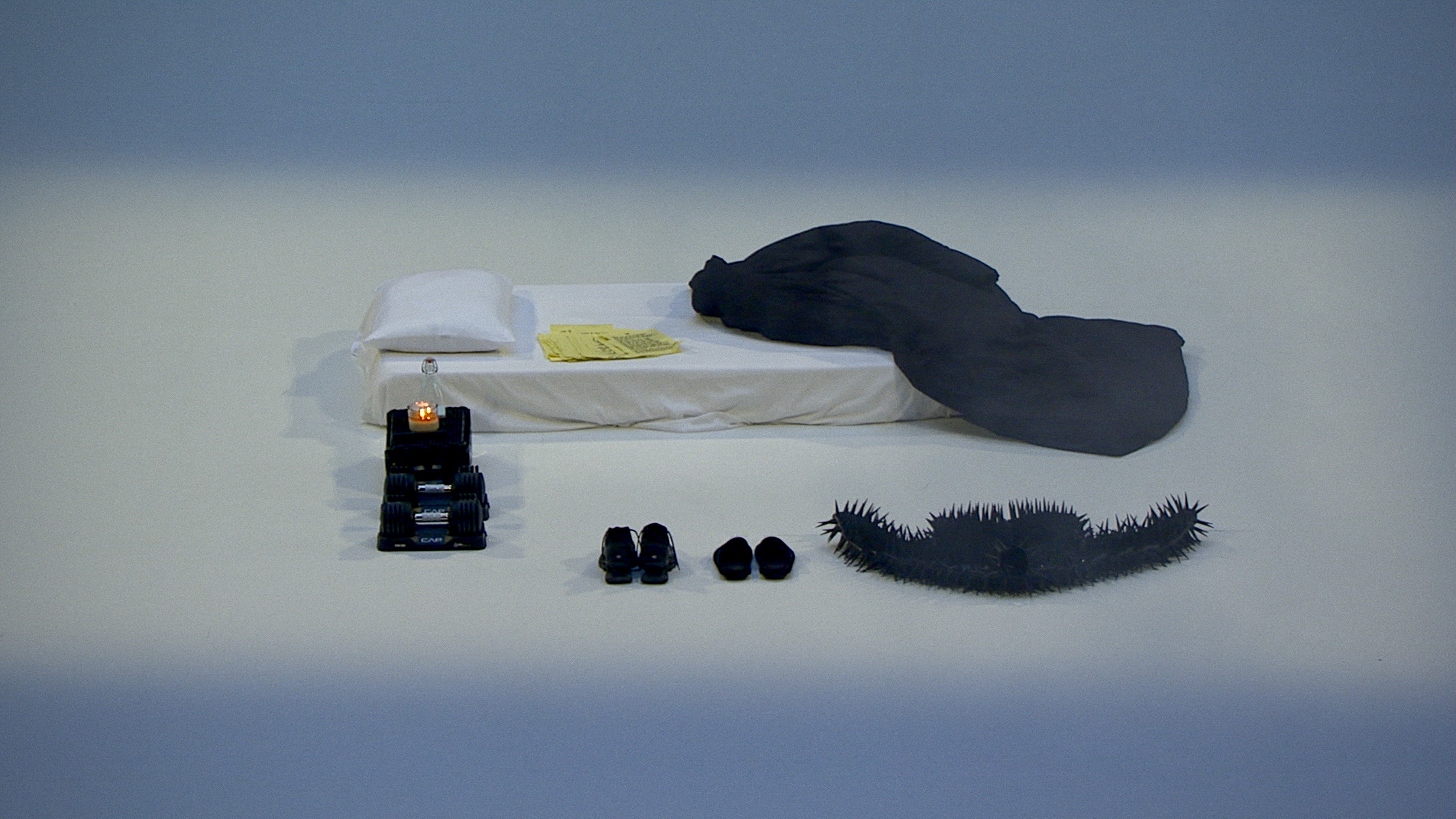 The stage for Kanye's show in collaboration with Demna Gvasalia of Balenciaga. Courtesy.

Shortly thereafter, West is rumoured to have taken up residence in the stadium itself, posting a photo of a sparse bedroom that quickly went viral.

Hours before last night’s show, West began live streaming again, showing shots inside that same sparse room, which appears to be his headquarters and living space in the arena. Shots of the show’s merchandise were later displayed, with West holding up a hoodie for the concert. A clock shown on the wall appeared to be counting down to the album’s 12:30 AM release date.

Last night’s event comes on the heels of a tumultuous few years for West, marked with plenty of successes and high-profile deals but also by public struggles with mental health, debt, hospitalisations and most recently, the end of his marriage to Kim Kardashian. Several songs on the album made direct reference to the past year — losing family, his newly single lifestyle — as West paced the stage.

For West, the album and show are another instalment in the artist’s long history within the fashion world, which has included his own Yeezy line, a slew of collaborations, including Adidas, and the coming Gap teamup, as well as the headline-making clothes he and the Kardashians are photographed in. In the run up to the album’s release, the rumour mill around West’s fashion aspirations has kicked into overdrive. The slow-drip release of the Yeezy Gap puffer jackets stoked speculation about when a full collection would drop, and what it might contain. He also appeared publicly wearing Nike socks on multiple occasions, despite his longtime affiliation with Adidas.

This show, notably, gave West a chance to work with Gvasalia, a designer he’s long admired and whose inclusion in the project was announced days before the show. 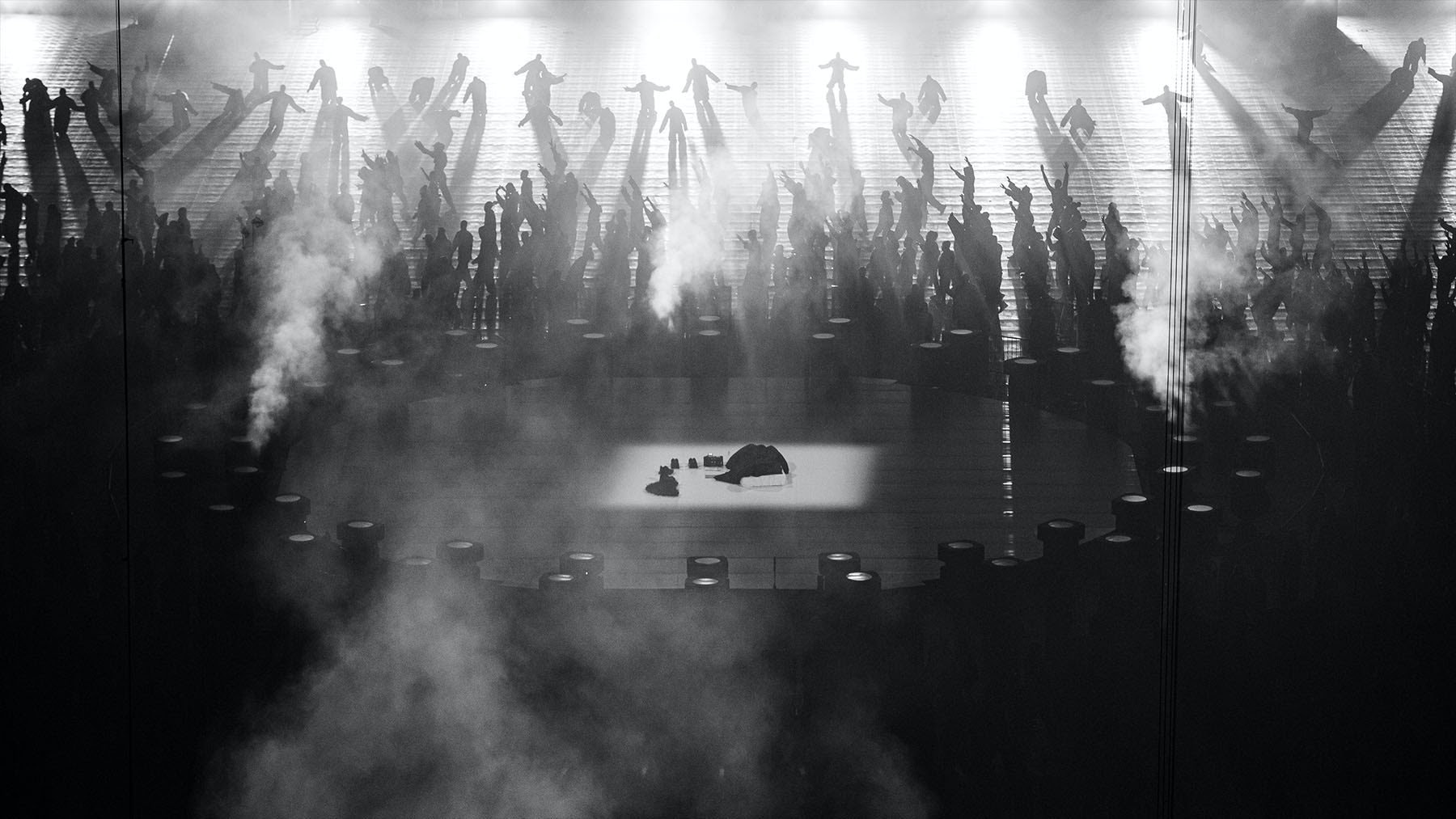 Kanye West on stage for his show in collaboration with Demna Gvasalia of Balenciaga. Courtesy.

The relationship between the two is chronicled mainly via deleted tweets from West, who previously tweeted that Gvasalia designed for Yeezy Season 1 and later that he hoped to “steal” the designer from Balenciaga. West has also demonstrated an affinity for luxury giant Kering’s brands in the last year, making a rare public appearance at both Balenciaga’s couture show as well as Bottega Veneta’s most recent private show in London.

Gvasalia’s Balenciaga shows have gained widespread attention for their otherworldly approach to set design and visuals, submerging a catwalk underwater for an Autumn/Winter 2020 show or creating an LED panelled tunnel with artist John Rafman showing melting ecosystems for Spring/Summer 2019, for instance. Even more sobering settings have managed a surrealist edge, the most salient an interpretation of Balenciaga parliament floor in 2019.

It’s not the first time a rapper has tapped a creative director of a fashion house for help with an album. Riccardo Tisci, then creative director of Givenchy, was tasked to create the album art for West and Jay-Z’s Watch the Throne in 2011. Givenchy’s Matthew Williams is also a frequent collaborator with rapper Playboi Carti, even earning a producing credit on his last album.

While West may hope to steal Gvasalia for more events tied to the tour, it’s unlikely the designer, who recently debuted his first couture collection, will be leaving his role at Balenciaga anytime soon.

Gap Bets It All on Yeezy