Hypebeast, the unflappable online destination for sneaker enthusiasts who hold Off-White and Supreme in equally high regard, has seen revenue and profits soar in recent years as it has transformed from a blog that exemplified the rise of streetwear into a global destination for cnews and shopping. The publisher is riding high on a wave of mainstream interest in limited-edition sneakers, graphic T-shirlts and hoodies and the culture of hip hop and skateboarding. Readers — including a growing number in China — are flocking to the site, many to shop from Hypebeast’s online store.

In its most recent annual report (a mandatory filing since going public in Hong Kong in 2016), the publisher reported a 75 percent increase in revenue to HK$672 million (about $86 million) for the year ending March 2019. Profit after tax was up 37 percent to $7.9 million.

Hypebeast is booming at a time when print media is continuing to struggle, and even other online media startups like Buzzfeed and Vice are reporting steep losses and laying off staff. The Hong Kong publisher’s model — combining advertising, branded content and commerce — is seen by many rivals as a potential way forward, including rival streetwear player Highsnobiety, which launched its e-commerce business with an exclusive offering of Prada’s Linea Rossa line in May. GQ, the men’s magazine with the highest circulation in the US, rebranded earlier this year under new editor-in-chief Will Welch in part to cater to the younger streetwear aficionado, too. But Hypebeast’s 9.9 million monthly visitors outstrips both publishers, according to data from SimilarWeb. 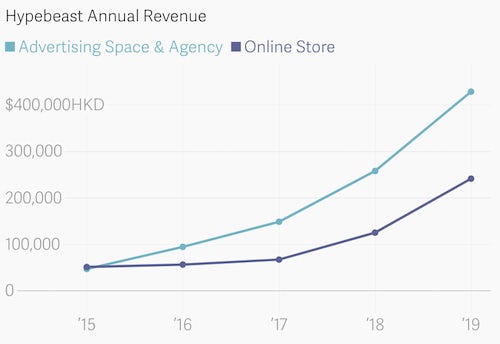 Hypebeast's e-commerce revenue is starting to catch up to its advertising revenue | Source: Atlas

Hypebeast’s success stems from a series of decisions Chief Executive and Founder Kevin Ma made starting in 2012 to diversify away from display advertising, which has become an unreliable source of revenue across the media landscape. And though efforts like a childrenswear site and a streetwear festival in Brooklyn have met with mixed results, other initiatives, including a rapidly expanding online shop, have paid dividends.

Revenue from ads (not including creative agency work) made up 42 percent of total revenue in the most recent fiscal year, down from 49 percent in the year ending March 2018.

Advertising still grew 50 percent from a year earlier, but revenue roughly doubled from both e-commerce and from the creative agency, Hypemaker, which produces video and product collaborations and books talent for brands, among other services. The agency was officially launched in 2017, but Hypebeast has offered some custom ad work since as early as 2008.

It doesn’t hurt that China, the world’s fastest-growing major luxury market, is at Hypebeast’s doorstep.

“Streetwear and hip hop culture is growing massively in Asia,” said Eunice Shin, a partner at brand and marketing consultancy Prophet. “They are able to do it in a really interesting way ... [Hypebeast has a] very US, English-based content approach to it, but really applying it — from a distribution point — to their local markets.”

Hypebeast started selling about 10 brands online through its store, HBX, in 2012. In its most recent fiscal year, that figure was 344, encompassing more than 10,000 products. Brands range from Alyx and Ralph Lauren to Justin Bieber’s Drew House line. The number of sales rose 47 percent year over year.

Hypebeast is a rare instance of a media company running its own e-commerce operation, complete with warehouses full of inventory and global shipping networks. Most opt for the cheaper, if less-lucrative, option of linking to third-party retailers and taking a cut of that transaction.

Ma said the current iteration of the e-commerce store was built gradually on top of the smaller business seven years ago. He described the first few years as “practice rounds,” adding that he has avoided soliciting outside investment in part to avoid pressure to grow too quickly.

That paid off a couple of years ago, when Hypebeast course-corrected, reducing the number of products it sold by 3,400. The company also expanded its warehouse space. Moving forward, the company plans to offer more exclusives and higher-end products. 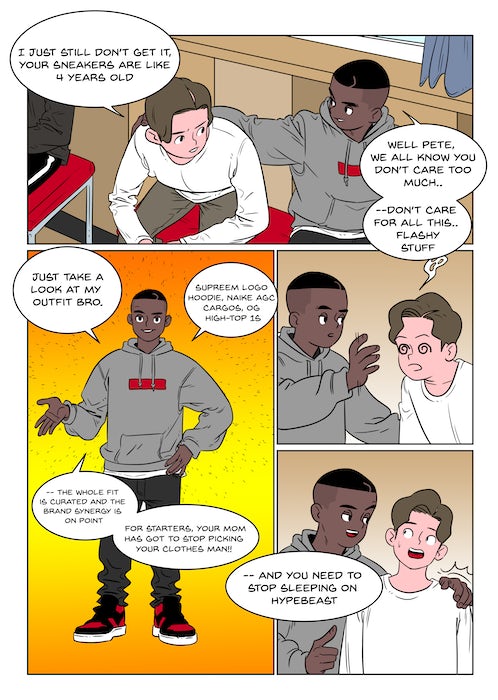 “We were finally able to say, ‘Okay, we are at a good place, let’s try to grow a little bit more aggressively,'” Ma said. “And it worked.”

Shin said e-commerce is an essential investment for many digital media companies because there is a clearer path to scale that business, as opposed to branded content, which is more labour-intensive.

Scaling e-commerce is expensive, however. For Hypebeast, the segment’s gross product margin decreased from 46.6 percent to 45.1 percent in the most recent fiscal year.

2. The Value of China

Hypebeast — whose portfolio includes Popbee, a fashion, beauty and lifestyle website targeting Asian women — operates directly in China, where many Western rivals are expanding through partnerships with local media companies.

“We have been around there for a bit, so people trust what we do,” said Ma, who was born in Hong Kong and grew up in Canada.

Ma also said Hypebeast is differentiated from other media companies because it does not operate as a license with an external publisher in any of its regions, including China. Most media companies expand into new territories by licensing their brand identity to a local publisher who actually produces the content and operates the business.

“The problem with [this type of] licensing, I personally feel, is that the communication might be disconnected [or] disjointed because you’re not really one company anymore,” he said, adding that his regional leaders report back to the Hong Kong headquarters, where the e-commerce business is based. The creative agency can also offer brands global exposure, and on the editorial side, content is translated and shared. Languages include traditional Chinese, simplified Chinese, Japanese, Korean, French and English.

Hypebeast must retain its authority in the US to continue to grow in China, Shin said.

“They still have to be hugely relevant here in the US for them to be considered a trendsetter and have the influence that they do [in Asia],” she said.

They still have to be hugely relevant here in the US for them to be considered a trendsetter and have the influence that they do in Asia.

3. Creative Agency Branches Out Beyond Fashion

Hypebeast’s creative agency worked on 41 percent more projects in the most recent fiscal year, with their average value increasing by 24 percent. The company’s services include everything from art direction to event production. The more of those services it is able to bundle together, the more lucrative the work becomes.

A standout example from last year includes a campaign for an unlikely partner: the franchised chicken restaurant KFC. Hypebeast connected the company with Japanese designer Nigo, the founder of Bape, who created a line in partnership with KFC and his brand Human Made.

Topped off with a release party at a “rebranded” KFC in New York, the project “created a lot of noise on social media,” Ma said. To the casual Hypebeast reader, it looked like just another surprising streetwear collaboration. Hypebeast’s role wasn’t addressed in the videos or posts.

“We were really behind the scenes,” said Ma, adding that the company hopes to do more of these kinds of “white label” projects, or campaigns with multiple elements.

It’s no secret that streetwear is a massive and growing business, and the fight for consumers’ eyeballs and dollars is on. Reseller StockX and marketplace Parade are among the many retailers diversifying into content, while publishers are amping up their e-commerce efforts. Highsnobiety, known for its longform content, wants e-commerce to represent 30 percent of revenue in the coming years. Condé Nast’s GQ is attracting new readers with its refreshed approach, though it is unclear if this evolution has brought in new advertisers.

Hypebeast is spending more on social media marketing and advertising to boost its e-commerce site and creative agency. Sales and marketing expenses increased 83 percent in the last fiscal year to $19.6 million.

The company’s overall gross profit margin also decreased from 52.9 percent the prior year to 49.9 percent due to the higher cost required to deliver more complex advertising services, as well as the overall revenue shift to e-commerce, which has lower margins overall.

Ma said the investment in sales and marketing was years in the making, not a recent development. “Every year, we're just trying to build more infrastructure on top where [we can say], ‘Hey, we can do this now.’"

5. Experimenting with New Forms of Engagement

Even as it grows, Hypebeast is looking at new ways to connect with advertisers and readers.

Last year, it hosted its first ever multi-day festival, Hypefest, in Brooklyn, that hosted over 10,000 people in two days. It was a way to show advertising clients that Hypebeast has the ability to execute ambitious, large scale events. While Ma said it was a success, he is not sure if the event will return this year.

New York will have a permanent Hypebeast presence by next year: the company is planning to open a store in the Lower East Side in a building where it already has its offices.

“We're trying to provide that inspirational space for people to learn [about the brands on offer] and then hopefully, from that, they're able to maybe convert to being our online customers,” said Ma.