NEW YORK, United States — The crowd at Hypebeast’s first streetwear festival last weekend looked different than the typical lineup outside a Supreme store. True, plenty of the ten thousand or so mostly male Hypefest attendees were decked out in variations on the streetwear uniform of t-shirts, hoodies and sneakers emblazoned with logos for Off-White, Online Ceramics and Palace. But teenage boys were in the minority; parents with little kids were not uncommon. And shopping for exclusive releases was conducted online through an app that only worked on-site, preventing the usual resale frenzy.

Streetwear is maturing, and Hypebeast, which helped define the category with its obsessive coverage of coveted brands starting in 2005 and now counts 9.3 million monthly unique visitors, is one of a host of media companies upping its game to stay on top of the growing category.

This should be a golden age for men’s fashion media: menswear sales grew twice as fast as womenswear between 2012 and 2017, with athletic footwear — aka sneakers — soaring 37 percent in that period, according to Euromonitor. The problem for Hypebeast — not to mention rival streetwear hub Highsnobiety and menswear magazines Esquire and GQ — is that its audience has splintered. Advertising media budgets are contracting across the market as brands invest in Facebook and Google as well as their own channels. Meanwhile, millennial menswear enthusiasts are relying more on friends and influencers for their style cues.

Media companies are all trying to reach men like Reggie Harris, 24, a Hypefest attendee who said he browses Instagram and websites like GQ for style news, but Reddit is his main source for streetwear and sneaker releases.

The pressure is on for men’s fashion media companies to get more creative about growing their audiences in different ways — and win marketing and sponsorship dollars from brands at the same time. GQ, which counts 11.5 million monthly unique visitors online, recently appointed Will Welch as its new editor-in-chief. Respected for his style and taste in the streetwear community, he currently leads GQ's younger, cooler quarterly publication GQ Style. The appointment signifies a generational change for one of the most prominent men’s fashion titles in US.

Events like Hypefest and Complexcon, Complex’s annual Long Beach blow-out music and streetwear festival, are emerging as a popular way to build deeper connections with readers and generate revenue outside advertising through sponsorships. Over the last year, Highsnobiety has hosted two multi-day panels and shopping events with Barneys called “thedrop@barneys.” 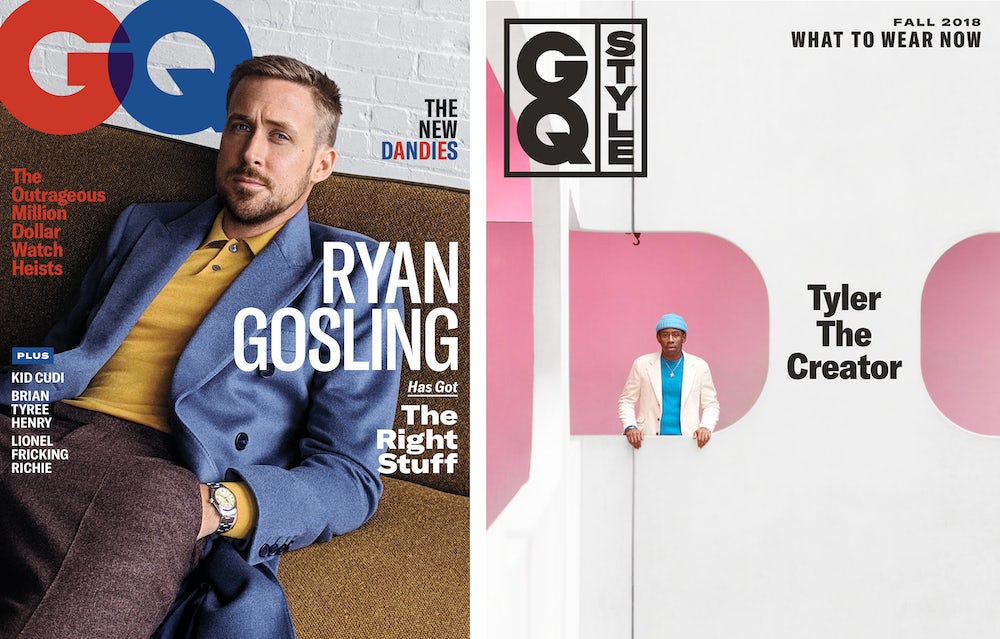 And on Friday, Conde Nast’s GQ announced plans for its own consumer event, GQ Live, taking place for the first time over two days in Los Angeles after the annual Men of the Year Awards in December. “Men really want GQ up close and personal, and they want to see our editors and meet our editors,” said David Stuckey, vice president of revenue for GQ and GQ Style, explaining the concept behind the event.

Experiences like these, a strategy not yet oversaturated with options, can attract new audiences and advertisers.

At Hypefest this weekend, where tickets were free, attendees could watch performances from Sheck Wes and Trippie Redd, catch a glimpse of Gucci Mane and Jonah Hill, display their own carefully curated style and show their friends online that they were there.

And alongside the decorated booths lining the different exposition buildings and housing streetwear favorites like Adidas, 1017 ALYX 9SM and Heron Preston and designer luxury labels like Sacai and Moncler, guests came across some more unexpected additions, including Diesel, Marc Jacobs and Lacoste — brands eager to be a part of the streetwear movement in a way they weren’t before. Hypebeast can deliver that coveted adjacency — and get consumers to show up.

“It’s been pretty cool to see people drop things [here], especially exclusives,” Harris said, while standing next to the Rimowa Off-White luggage carousel, representing one of the highest-profile collaborations between luxury and streetwear. He had spent his Sunday buying t-shirts and hoodies from Girls Don’t Cry and Hiroshi Fujiwara’s The Conveni, among other brands.

Hypebeast founder and chief executive Kevin Ma said he wanted to encourage Hypefest guests to interact with each other and with brands, instead of just focusing on shopping.

“We are always online, always on our phones on Instagram, on social media platforms, so you do want these offline experiences to physically meet people, connect with people who are into the same things,” he said.

But brands are waking up to the fact that the best place to reach male consumers is indeed through their smartphones, says Francia Miller, director of digital investment at Mindshare North America. “A lot of luxury partners are tapping more into social, using publishers’ social followings either with custom content or tapping into their influencers,” she says.

At GQ for example, digital campaigns with a social media component have increased 117 percent year over year, according to David Stuckey, vice president of revenue for GQ and GQ Style.

While a legacy brand can provide more awareness and reach, digital brands’ audiences are often more ready to shop. And in today’s market, proven ability to convert sales is key.

“Larger deals are coming our way that maybe would not have come our way a few years before,” says Highsnobiety founder David Fischer. (The website counts 9 million visitors per month.) Athletic brands have larger budgets to spend thanks to increased sneaker sales, and he no longer has to explain Highsnobiety’s significance to luxury and fashion brands looking for custom branded content or social media campaigns. “We are now a real alternative to those, for lack of a better word, more old-school men’s fashion titles.”

Fischer says that while the luxury players are more open to digital marketing, they are still sometimes reluctant to cede control to media partners to create branded content for them — a core revenue driver for digitally native media brands like Highsnobiety. “But more and more brands are opening to that.”

One example is Highsnobiety’s custom content partnership with Burberry in the days leading up to Riccardo Tisci’s first runway show as chief creative office that involved layering the luxury house’s new logo over different parts of the website. “That is definitely something that even 12 months ago or 18 months ago would not have been something a brand like Burberry would have considered with a partner like us,” says Fischer. “We are very used to thinking integrated.”

Another brand turning to streetwear-focused media is Diesel, which joined Hypefest at the recommendation of Sarah Andelman, a consultant on the event. The Italian denim-focused brand, known for its provocative advertising, is trying to reconnect with younger consumers.

“[Advertising] before was 100 percent on the magazines and just some events, and now we are going to turn our investment more into digital because everything is there,” says Renzo Rosso, president of Only The Brave and co-founder of Diesel. He says the brand’s strategy is shifting to foster relationships with influencers and VIPs like Gucci Mane who expose Diesel to their fans. “The brands gain respect; This is the new way to do communication today,” he says.

Rosso appeared at Hypefest with Diesel’s new ambassador, rapper Gucci Mane, to mark the release of the brand’s new anti-bullying campaign. While the weekend’s attendees are not exactly Diesel’s typical wholesale consumer, says Rosso, they are a group that will bring the right kind of attention to the brand. “To be part of this kind of event is to be more close to the millennials,” he says.

I don’t expect the media world to experience some kind of crazy paradigm shift because Virgil Abloh is a rock star and Rimowa collaborated with Supreme.

Diesel isn’t the only brand looking to take advantage of the menswear boom. More sportswear, sneaker and skate brands are taking their marketing budgets to publications that don't necessarily specialise in streetwear, too.

“It’s just opened up a whole new revenue stream of what we can go after because guys now, at any age, have permission to wear sneakers,” says Jack Essig, senior vice president and publishing director and chief revenue officer at Esquire. The Hearst magazine saw 15 million monthly unique visitors in September 2018. “We’ve never claimed we were a fashion magazine — we are a magazine that is rooted in style and culture, but not fashion,” continues Essig. That focus on general interest journalism and lifestyle is a differentiator for the brand, he says.

He hit upon what some see as a larger identity crisis in the media industry.

“In the post #Menswear world, [during which] an entire generation of guys my age educated themselves [about style] on Tumblr and personal blogs…why does anyone need to go to a traditional media site?” asks Lawrence Schlossman, the brand director of streetwear-focused marketplace Grailed. “I already know what the cool brands are because they are all over social media.”

As long as the industry’s major advertisers remain unchanged, he said, the fashion in its pages will not significantly evolve.

“I don’t expect the media world to experience some kind of crazy paradigm shift because Virgil Abloh is a rock star and Rimowa collaborated with Supreme,” he says.

He praised GQ Style for successfully “toeing the line” between pop culture and high fashion by, for example, having Matthieu Venot photograph Tyler the Creator in Brunello Cucinelli and Moncler for its latest cover. “It’s an interesting way to get a kid to buy the magazine or read the article online,” he says. “I don’t know if that would work for GQ proper.”

Meanwhile, a newly influential category of publications are e-commerce editorial sites, says Schlossman, citing Mr Porter and Ssense as valuable resources — in addition to Grailed’s own content — for context and education about the kind of designers and brands young engaged consumers are looking for.

But they do not solve what Schlossman sees as men’s fashion media’s larger problem — it is no longer the first source for trends.

“I'm interacting directly with all those brands directly on social media,” he says. “I can go to Ssense and get my content there, I can shop and read all in the same place — does there need to be another step?” The pressure is on for all the players in the market to justify their existence. “I don’t know what any publication is giving you that you can’t just get from speaking to another member of the community, completely devoid of any type of media.”

#Menswear is Dead. What's Next?