One year into his role as head of the paper’s Styles section, Sicha is rethinking how he delivers content to readers.

New York, United States — Choire Sicha is the editor of the Styles section at The New York Times, one of the most prestigious jobs in media, but he also considers himself a newspaper delivery man.

“In the olden days, a young person would go by on a bicycle and toss newspapers into people's driveways,” he says. “We don't get to abandon that job, even if we're only delivering digital newspapers… We should invite people to read us.”

One year into his role as the new head of the paper’s features and fashion-focused section, Sicha is mulling over how best to meet audiences where they are with the content they want, whether it’s through app alerts or email newsletters or something else. “I’m going to [give] you your New York Times every day. What that means? We are working it out.”

Sicha says he will focus on this idea over the next few months, coming off a year in which he and the team refined the function of Styles, its organisation and goals. Is the features desk a magazine? Should it be more a part of the daily conversation in a way readers might not expect? 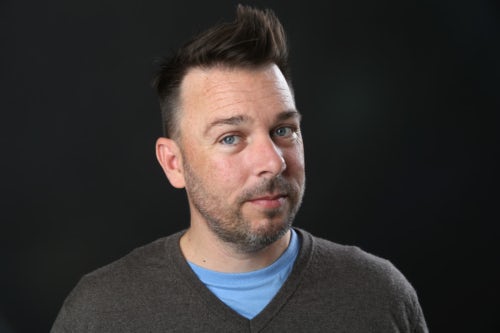 "We weren't in a situation to handle news particularly well," he says. "And we wanted to be able to participate in that ecosystem of the New York Times. We are a competitive news organisation also."

This spring, Sicha brought on Natalie Shutler, previously an opinion editor at the Times, and breaking news reporter Jonah Engel Bromwich. Other new names include Caity Weaver, who splits her time with the New York Times Magazine and Bonnie Wertheim, the staff editor responsible for the Styles’ voice on Twitter, which has gotten a lot of attention this year for its mischievous tone.

Sicha and his team also decided that they want help readers learn more about how to present themselves, how to take care of themselves, how to become adults, how to get advice, how to have fun and how to work. "It’s this gaping need in people’s lives, and it’s not that we want to take it over, I just want to be part of that conversation," he said.

As a result, Styles’s approach to fashion has become more bifurcated between coverage of clothing in everyday life and the coverage of luxury, fashion business and retail. While Sicha doesn’t want to formally separate industry coverage from Styles, he thinks it could be packaged better online and in print. Styles will dedicate three spreads per week to fashion month in September and October, and that coverage is also led by fashion editor Anita LeClerc and fashion director and chief fashion critic Vanessa Friedman.

When it comes to the runways, Sicha says Styles’ coverage should hone in on what’s “exciting and important,” and not feel the need to address everything. “I would rather tell people: here’s three things we learned in the last five days that were really notable.”

In his first year, Sicha also grouped the Styles desk’s staff into four “practice areas”: fashion news; self-care, beauty and wellness; love and relationships (which includes weddings and Modern Love); and a final catch-all section for “journalism about social change and how the world is changing.”

Sicha also says that just in the way Styles helped popularise new types of journalism and non-fiction writing, so too should it now be on the forefront of new forms of visual journalism.

Tracy Ma, visual editor, was brought on this spring “to help us execute special projects that are truly frightening, or at least make your phone battery heat up,” says Sicha.

One example is a new augmented reality project starring Ashley Graham, released this week timed to the start of New York Fashion Week. The paper recorded the model and activist in 3-D holographic motion, and readers via the iPhone can project her into their own surroundings.

Graham is a fitting subject for Styles because, as the most successful plus-size model in the industry, “she takes on this social cruelty on behalf of other people,” and Sicha says that the paper’s fashion-focused desk has a responsibility to help combat that cruelty.

Also on his mind when it comes to fashion? How the forces disrupting the industry are similar to those reshaping media. “When I talk to people in fashion, more and more I’m actually cruising them for ideas I can steal,” says Sicha. As an example, he brought up Nordstrom’s strategy to encourage online shoppers to buy in stores, and vice versa, because they become more valuable customers over time. “That’s true for me too in a way,” he says. “People who touch print and touch our website are loyalists. That’s what I want to encourage.”