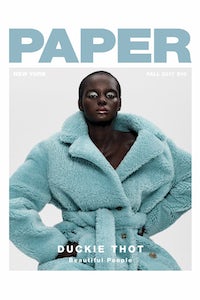 The terms of the deal signed on Tuesday, and expected to close in the next couple of weeks, were not disclosed. Hastreiter and Hershkovits’s roles in the future of the company have yet to be determined.

This acquisition not only bets on Paper's cultural influence but also on the digital savvy of Elliott — who started his career at Paper and returned in 2014, the same year the magazine released its instantly famous Kim Kardashian “break the internet” issue — and on the big media credentials of Florio, the former publishing director of Vogue and Bon Appétit, among other titles.

While Paper has been a hugely significant voice in media, it has struggled to scale its business model in today’s competitive and fragmented media landscape. “It’s a tough industry to be in right now. [Hastreiter and Hershkovit] are excited we were able to bring innovation, passion and financial resources to it,” says Florio.

“I always wanted Paper’s vision and what Kim and David have built to be seen by so many more people,” says Elliott.

Over a year ago, as Florio sought to build a modern media company that used technology to amplify its distribution without sacrificing its creative direction, he began having conversations about Paper’s future with Hastreiter. “I like Paper because of [its] cultural legitimacy… the reference points [come] from people who understand pop culture, who understand art, who understand music, who understand food, and it’s not just algorithmically based content,” says Florio, referring to publishers who optimize to chase clicks.

He and Elliott, who are now equal partners in ENTtech Media Group, then began working on a business plan and pitching potential investors. They eventually formed a relationship with strategic partner Michael Y. Chow, co-founder of XRM Media, a media technology company targeting Generation Z and millennial audiences, and managing partner of MNM Creative, a multi-media and entertainment company with offices in Shanghai and China. In the future, ENTtech Media Group plans to not only expand Paper internationally but also acquire more like-minded media companies.

Paper Communications includes the print magazine (which will now shift from publishing six times a year to a quarterly frequency), the digital business (Papermag.com, which sees 1.5 to 3 million monthly unique visitors) and the creative agency Extra Extra. While the agency, which does event marketing for clients such as Target and American Express, currently accounts for most of Paper’s revenue, Florio says he and Elliott plan to grow the digital content into the primary revenue source by expanding the team, investing in video and viral strategies and building “social architecture and distribution” technology. He declined to elaborate further but said this technology is being built both in-house and with external partners.

“We will convert readers to viewers and that’s really the important thing. I really want to break down this idea that we need to report on culture; I want to create culture,” says Elliott. “It’s not just going to be on websites and in magazines, it’s going to be in entertainment and across all screens.”

“Paper comes from a reference point of understanding what’s good in pop culture. That doesn’t seem to really exist today with a lot of the digital publishers that are launching against this millennial market, especially targeted towards young women,” says Florio.

Indeed, many publishers such as Bustle, Refinery29 and Cosmopolitan are racing to create something akin to a Vice for female audiences: a video-centric platform that resonates with millennial and Generation Z audiences. But many multi-vertical publishers are often stuck either striving to reach mass audiences while sacrificing quality or, on the flip side, retaining a niche point of view but hitting a ceiling on their reach. Whether the combination of Paper’s rich history and its new leaders' focus on distribution will give it a leg up on such competitors is yet to be seen.

“We aren’t built on this old traditional media company,” says Elliott. “We are a startup on top of a 35-year-old heritage.”

Disclosure: Tom Florio is a board member of The Business of Fashion.

Kim Hastreiter: 'I Saw This Whole World of Music, Art and Fashion Colliding.'