NEW YORK, United States — Condé Nast has finally found a buyer for W Magazine, but long-time Editor-in-Chief Stefano Tonchi will not lead the title into its new era.

The large-format magazine, known for its avant-garde fashion shoots and Hollywood portfolios, will join the arts and design magazine Surface in the newly formed Future Media Group, which acquired W on Monday. A representative for Condé Nast confirmed the transaction.

Future Media’s Chief Executive and Chairman Marc Lotenberg named W’s Style Director Sara Moonves as editor-in-chief, reporting to him. The magazine will continue to publish eight issues a year while expanding its digital content and diversifying its revenue through memberships, events and television projects, Lotenberg said in an interview.

Lotenberg is an owner of the newly formed media company, along with Eric Crown — a tech millionaire and prominent Republican fundraiser based in Arizona — and Sandow Media, publisher of several specialists titles including NewBeauty, as well as other undisclosed stakeholders. The New York Post in May reported W’s sale price at around $7 million. 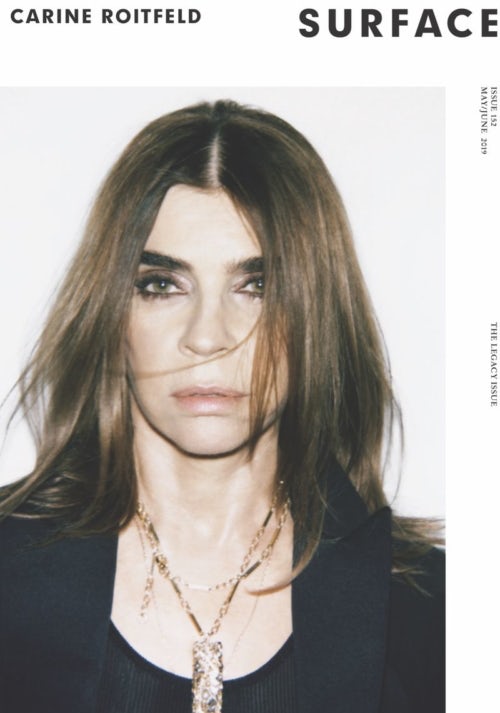 The May June 2019 issue of Surface with Carine Roitfeld | Source: Courtesy

“I’m honoured to be a custodian of the brand and take it into its next frontier,” Lotenberg said, adding that he bought W because he wants to transform legacy titles into “something that is just more than media.”

“W is W because of our amazing contributors, and I look forward to continuing to work with them in my new role,” said Moonves in a press release.

W is the last of three Condé Nast titles to find a buyer in a round of sales initiated last summer by former Chief Executive Bob Sauerberg, as the publisher focused on top-tier publications like Vogue and Bon Appétit. In May, Discovery Inc acquired Golf Digest for $35 million and Barry Diller’s digital media company Dotdash acquired Brides.

Tonchi joined W in 2010 and is a respected editor and a favourite among advertisers. He pushed the luxury-focused W, already known for its conceptual photography when he arrived, to have more substance and be more ambitious in its coverage of fashion, art and Hollywood, reviving its business following a post-recession decline in advertising.

In recent years, Condé Nast cut the number of print issues from 10 to eight and Tonchi repositioned the issues as limited-edition collectibles, while boosting the title’s online presence. He was involved in the nine-month search for a buyer and was widely expected to continue in his role under new ownership. But those plans fell through due to reported disagreements with Lotenberg over, among other things, salary, according to sources with knowledge of the negotiations.

Lotenberg declined to comment on the specifics of Tonchi's departure.

"My top priority in the last year has been to ensure that W finds a new home and carries its legacy into the future, and that every effort is made to protect my staff’s job security," said Tonchi via email. "I worked very hard to bring in and meet every prospective buyer. In my view, what is required is a larger vision, a proven track record, international experience, a robust business model with multiple revenue streams, and an ability to anticipate market trends, and ultimately, to innovate.

The editor will not remain at Condé Nast in some other role and said he will share new plans in the coming months.

“I think he’s done a wonderful job at the brand, but from an innovative standpoint and where we are looking to go, I think women’s fashion should be seen through women’s point of view,” said Lotenberg, highlighting the fact that Moonves is W's first female editor-in-chief.

Lontenberg said Future Media will make offers to all current full-time employees at W and some contractors. Amber Estabrook, vice president of revenue at Condé Nast, will become Future Media’s chief revenue officer and will bring with her several salespeople based in Paris and Milan. Lynn Hirschberg, W’s most prominent contributor known for her decades-long career covering Hollywood and for her popular “Screen Test” video series, will stay through the remainder of her current contract ending later this year and is in talks to extend after that.

“We’re excited to invest behind her,” said Lotenberg. “She’s a genius.”

Rickie De Sole, W's fashion director who spends most of her time on Vogue projects already, will stay with the title full time.

It’s unclear who exactly on the editorial team will make the transition at this point, but some W staffers who don’t make the cut may also have the option to remain at Condé Nast at other titles. Lotenberg declined to comment on potential layoffs but said there will be some shared staff roles between Future Media’s publications. 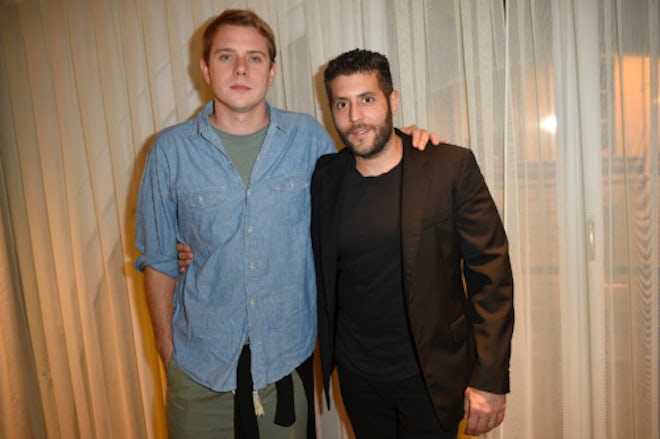 The question now is if Surface’s new parent company has a strategy to steer W through a brutal period of declining advertising revenue that has seen other publications cut back print, file for bankruptcy or shutter all together. Future Media will need plenty of cash to support a fashion title accustomed to hiring expensive photographers like Steven Meisel, Steven Klein and Tim Walker to shoot elaborate editorials. It’s a different business model than that of Surface and sister title Watch Journal.

Lotenberg said he is confident in W’s future growth, citing the “super dedicated passionate people” already on staff. “It’s time to make tough decisions and change is not for everyone. We know what technology needs to be put into place.” Some editorial roles will be shared among Future Media’s three titles.

Lotenberg said he is committed to print, although the distribution model may change. (Subscribers will still receive their issues.) Surface, printed six times a year with a rate base of 100,000, is no longer available on newsstands and is distributed in 25,000 hotel rooms, 350 private jet terminals, some specialty and available to purchase online. He said he believes in a content-first model across all platforms where the audience is already engaged.

“The competitions for media companies aren’t other media brands anymore — everyone’s a content producer,” he said. “I think the problem that’s happening in media right now is media companies are all over the place: they’re print-first, or digital-first or social-first or video-first. And those are all the wrong answers. The right answer is content first... where they distribute are just channels.”

It’s unclear how Lotenberg will alter the path forward for W that Tonchi charted in recent years. The editor built out a web team and produced more videos and introduced a newsletter. Tonchi was vocal in the months since the sale’s announcement last year that Condé Nast did not sufficiently invest in the title’s growth. W’s website averaged 2.1 million monthly visitors between March and May 2019, according to global data from SimilarWeb. (In the same period, Surface Magazine averaged 69,000.) W's licensed edition in Korea is also part of the acquisition.

Surface’s most recent acquisition is the agency Culture+Commerce, which merged into the company in 2017 and is no longer functional, though it still generates revenue from licensing businesses. Lotenberg said the company is reconsidering how to relaunch it, but W’s integration is the focus.

Lotenberg’s previous publishing venture was 944 Media, parent of the magazine he founded, 944 Magazine. At one point, he described the company as the largest and fastest-growing regional lifestyle media group in the country, but it filed for bankruptcy a year later in 2010. At that time, the business was entangled in several lawsuits, including one targeting Future Media-investor Crown — who also backed 944 Media through a third company — over mismanagement around a costly Super Bowl party organised by the company. The suit was eventually settled out of court in 2015.

Sandow Media, then owner of Surface, acquired 944 Media in 2011 for a reported $1.3 million. The following year, Sandow sold Surface to Crown and Lotenberg, and the company reinvested in the business in 2017.

In 2007, Lotenberg and another employee were sued by three former female employees of 944 Media for gender discrimination, a hostile work environment, intentional infliction of emotional distress and wrongful termination. The case was also settled later that year.

Lotenberg declined to comment about the aforementioned lawsuits, but later added over email that all the disputes were resolved amicably. "It's unfortunate that we had an isolated individual employee in one of our offices that did not live up to our high standards. We dealt with the situation with a zero tolerance policy," he said via email, explaining that he was named in the second suit in his capacity as CEO.

Recent media reports have suggested that in addition to other disagreements, Tonchi was hesitant to work with Lotenberg.

“Change is not for everyone,” Lotenberg said in reference to reported negative criticism of his leadership. “I came into Surface, which needed fixing, and I made tough decisions that are important to improve the brand.” He said the company now “has very little turnover.” 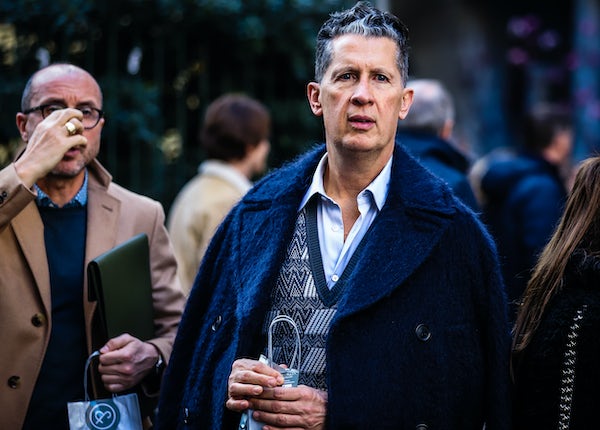 Moonves, 34, is a well-liked stylist who started her career working for Phyllis Posnick at Vogue in 2007. She later followed Sally Singer to T: The New York Times Style Magazine in 2010 and then returned to Vogue. Tonchi hired her at W to help will the void left by Edward Enninful when he was named editor-in-chief at British Vogue in 2017.

She is also well-connected in fashion, Hollywood and media; her father is Les Moonves, the former chief executive of CBS, who resigned last year after multiple allegations of sexual assault and harassment. Neither Sara Moonves nor her father, Les Moonves, are investors in Future Media, according to a source with knowledge of their involvement.

Sara Moonves is taking the helm of a magazine with a nearly 50-year history that has continued to rack up industry accolades even as its circulation has declined.

W was founded by publisher John Fairchild as a large-format society paper companion to industry newspaper Women’s Wear Daily in 1972, and re-conceived as a glossy consumer magazine in 1993 under Editorial Director Patrick McCarthy. Condé Nast’s parent company Advance Publications acquired W when it bought Fairchild Publications from Disney in 1999 and folded the magazine into Condé Nast when Tonchi was hired in 2010.

Before joining Condé Nast, Tonchi was the editor of T: The New York Times Style Magazine and held senior roles at Esquire, Self and L’Uomo Vogue. He was also a creative consultant at J. Crew for two years.

Tonchi brought over Hirschberg and her “Screen Test” videos (which she has trademarked) from T. He also hired Enninful from American Vogue, who styled many of W’s celebrated avant-garde covers and editorials before becoming editor-in-chief of British Vogue.

During Tonchi’s tenure, W has won four National Magazine Awards for photography and been a finalist in the general excellence category three times. Most recently it won the 2019 feature photography category for a 2018 issue photographed by all women and guest edited by cover subject and actress Cate Blanchett.

As of 2019, W reports 1.1 million print readers, 6.8 million followers on social media and 26.6 million video views. While circulation has remained mostly steady over the last five years at just over 450,000, average issue single-copy sales have decreased from 24,500 in the second half of 2014 to about 5,000 in the second half of 2018, according to the Alliance for Audited Media.