On a regular weekday, the store is packed with young streetwear aficionados who have come not just to purchase products from the label's latest drop, but also to hang out with staff and other like-minded members of the OVO tribe, which is rooted in appreciation for rap music, streetwear and contemporary art. The opening of OVO’s London boutique in November 2017 drew a line of 400 people.

Plenty of musicians and actors lend their names and famous faces to lines of apparel and trinkets. But the sense of community found at OVO shops is the secret sauce that Drake and business partner Oliver El-Khatib are using to build a streetwear empire that’s likely to clear $50 million in sales this year, according to a person familiar with the brand’s finances. It’s a similar element that has helped to transform once-niche streetwear labels like Supreme into global brands. 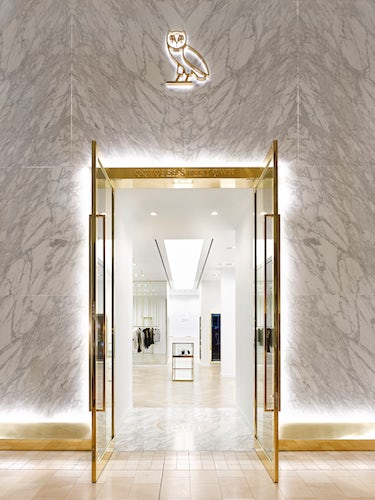 “Our shops are the most authentic way to experience the brand and our products,” says El-Khatib. “Many of our staff are friends and have become crew members, which all makes for a unique, family-like atmosphere which consumers pick up on.”

El-Khatib and a company representative declined to discuss Drake’s financial interest in the brand. Drake registered OVO as a business in California in 2015, naming himself as general partner before signing over that role to El-Khatib in a second filing later that year. In a May 2018 regulatory filing in the UK, Drake disclosed a 60 percent interest in the brand’s British subsidiary through a company he controls. Although a company representative has confirmed that the global business is owned by El-Khatib, Noah "40" Shebib and Drake.

El-Khatib met Aubrey “Drake” Graham in 2008 while working on the shop floor at Lounge — a popular Toronto boutique — which was frequented by the Degrassi actor-turned musician. “[Drake] and I formed a friendship right away and that snowballed,” says El-Khatib. “At the time he wanted to transition into a music career, so he started doing photoshoots and experimented with a brand for himself outside of acting. I was there alongside him in its early stages.”

They founded OVO as a MySpace page and later a blog where the two and their crew posted music, art, photography and fashion inspirations as well as their own work. “It was an intimate platform to communicate directly with an audience, much like Instagram does today,” says El-Khatib.

Drake released his first studio album, "Thank Me Later," in 2010, which went platinum and debuted at number one on the US Billboard 200, catapulting the rap artist into global stardom. A year later the collective put out theirs first physical good, an OVO-branded tour jacket made in collaboration with Canadian outfitter Roots.

“We started creating product out of necessity,” says El-Khatib. “There was a lot of travelling in different climates, so we needed practical, versatile garments that looked stylish while also being recognisable to security as well as at business meetings.”

For Canada Goose, the collaboration is a means to reach OVO’s strong following — the brand currently has over 1.2 million followers on Instagram, El-Khatib has 150,000 and Drake has 47.8 million. The brand is also using the partnership to experiment with new fabrics and materials, including a $5,000 black leather, down-filled Chilliwack parka with 24-karat gold hardware. Canada Goose has released nine collections with OVO, more than any other brand.

“Not all celebrity clothing lines work out, but we agreed that if done right it was possible for OVO,” says Dani Reiss, chief executive at Canada Goose. “Every collaboration we’ve done with OVO has been a strong success, and it often sell out in hours, if not minutes, across all of our channels.”

Drake, El-Khatib and producer Noah “40” Shebib, founded record label OVO Sound in 2012, which represents popular acts such as Majid Jordan and PartyNextDoor. A partnership with basketball team Toronto Raptors on the team’s alternate jerseys followed in 2013, as did its inaugural OVO basketball tournament.

Then in 2015, it debuted OVO Sound Radio, a bi-monthly radio programme made together with Apple’s internet radio station Beats 1, which is hosted, curated and edited by El-Khatib and premieres at least one single in each broadcast including hit singles, “Hotline Bling,” “One Dance” and “Back to Back.” (Testament to OVO’s vertical integration strategy was Drake’s recent single “Nonstop,” in which he pays homage to the origins of the OVO business in the line: “Future took the business and ran it for me, I let Ollie take the owl, told him brand it for me.”)

It really resonates in a fashion moment where standing out is way more important than fitting in.

“We’re still on a calendar like every brand but we have more flexibility to create our own moments and capitalise on them much faster,” says El-Khatib. “That’s the beauty of how we structure our business and ecosystem. I think a lot of conventional brands strive to have these types of moments but they’re going after third party events.”

By mostly being a direct-to-consumer business that isn’t reliant on wholesalers, OVO has a competitive advantage over traditional fashion brands. Sales are evenly split between its stores and its website. When the company wants to launch a product, release a new track by one of its artists or announce a collaboration, its global reach and direct line to its loyal consumers allow it to do so themselves — comparable to Kanye West’s Yeezy line and A$AP Rocky’s AWGE.

“The most impressive part of OVO's growth is how steady it's been,” says newly appointed American GQ editor-in-chief Will Welch, who has followed OVO’s ascent since its early days. “The models in the lookbooks, campaigns and social media blasts [for instance] are Toronto kids who work for the brand or are affiliated with the crew. It’s unique from what’s going on in American streetwear, which really resonates in a fashion moment where standing out is way more important than fitting in.” 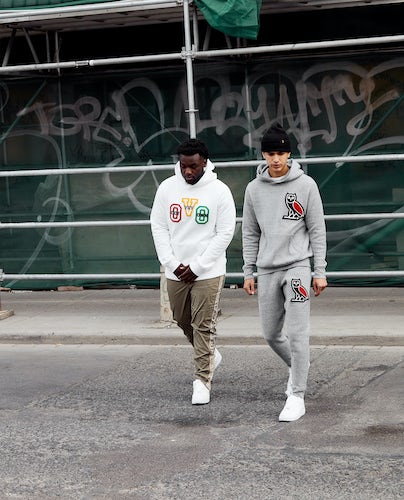 Welch also names the consistency of OVO’s product offering and its communications, as well as not relying too heavily on the Drake affiliation, as other success factors. “Most brands wouldn’t have been able to pass up the opportunity to quickly move a bunch of products by plugging into the celebrity complex, but OVO has stayed focused on its founding vision. I think that’s incredibly smart and patient — and it’s only just beginning to pay off.”

With a foundation in place, OVO is now ready to expand its retail network. In recent years, the brand has tested pop-up collaborations with Colette, Nordstrom and Browns. Its first permanent brick-and-mortar shop in Toronto followed in 2014. Two more Toronto outposts were opened, as well as stores in Los Angeles, New York and London.

El-Khatib says he plans to open stores in Vancouver and one in Mississauga, a Toronto suburb, and the first to carry OVO childrenswear, by the end of the year. “The investments in retail expansion are absolutely necessary for our long-term strategy, it’s a big focus for us right now,” he says.

On luxury fashion’s increasing integration with streetwear, El-Khatib offers a word of advice. “It’s [about] exchanging strategies between luxury and and contemporary brands like ours. In 2018, a hybrid-approach is undeniably needed,” he says, explaining the powerful marriage between year-round “essential products” and seasonal product drops. “Traditional luxury brands are [only] now building smaller product drops to [inject] energy moments into their calendar.”

Why Rappers are Fashion’s New Royalty