The executive has been named Condé Nast Britain’s chief business officer for style after helping to achieve ‘unprecedented revenue growth’ at the fashion title.

The executive has been named Condé Nast Britain’s chief business officer for style after helping to achieve ‘unprecedented revenue growth’ at the fashion title.

The executive joined British Vogue as publishing director in January 2018, a few months after Edward Enninful was named editor-in-chief. Together, the pair have navigated an increasingly challenging media environment to secure “unprecedented revenue growth,” according to the magazine, which also described itself as “extremely profitable.” Digital revenue at British Vogue rose 75 percent year-on-year in the first half of 2021, a continuation of growth trends in 2020, the magazine said.

The title’s performance contrasts starkly with the broader media landscape. The industry was already under pressure before the pandemic and has been hard hit by the decline in advertising budgets caused by the crisis. Condé Nast itself is going through a period of restructuring, attempting to streamline operations and regain profitability. Increasingly power has been consolidated in the hands of the publisher’s New York-based leadership.

But British Vogue appears a bright spot in the portfolio of the publisher’s British division. Enninful was named Vogue’s European director in December. Meanwhile Kingori is a central figure in the UK division’s restructuring plans, which target double digit revenue growth this year. In her new, role she’ll serve as chief business officer at Glamour while continuing her job at British Vogue.

In an exclusive interview with BoF’s editor-in-chief Imran Amed, the executive explained the strategy behind British Vogue’s commercial success.

“When I started in this industry, publishers were just caring about ad revenue, which is completely not what I do now,” said Kingori. Now, “it’s really about the health of the brand and the longevity.”

When Kingori joined British Vogue, Enninful had already begun an editorial reboot that served as a launch pad for commercial success. His vision for a new British Vogue — one that stood for social responsibility, social justice, diversity, inclusion and female empowerment — helped shape the magazine’s business strategy, said Kingori. Counterintuitively, that sometimes meant turning down business if brands couldn’t demonstrate they aligned with the publication’s values.

“When I first started in the role at Vogue, people thought I was a little bit mad because there were some brands that we just said we can’t work with them in that way anymore,” said Kingori. “Everybody wanted to do an event, everybody wanted to do branded content, because they wanted to align to... the magic that Edward was creating. But lots of brands... were being called out for getting it wrong.”

In particular, brands unwilling to take responsibility for missteps and demonstrate they wanted to do better weren’t a good fit for the magazine to partner with, she added. Those difficult decisions helped strengthen the British Vogue brand in the longer term.

It’s consultancy. There is a lot of problem solving in what we’re doing now.

Kingori made more prosaic changes too. She took steps to shift emphasis away from the traditional print advertising business model, where brands pay a fee for their latest campaign to appear sandwiched between editorials and features, and focused more attention on digital strategies, particularly content creation for brand clients. While Enninful gave British Vogue a new creative direction, Kingori established new, profitable revenue streams by finding creative new ways to work with clients.

“It’s consultancy,” she said. “There is a lot of problem solving in what we’re doing now, whether it be how to connect with consumers, how to create emotional connection, or how to overcome a practical ... issue.”

For example, last September British Vogue launched its first branded augmented reality filter for M.A.C Cosmetics. The beauty company was grappling with how to sell makeup during lockdowns, when shoppers couldn’t get to the beauty counter or try on products. The filter worked in part because it allowed consumers to “try on” makeup from the comfort of their own home, but it was also easily sharable, providing a fun, slightly frivolous way to interact with friends on social media at a time when they were missing human connection, Kingori said.

The campaign outperformed expectations, reaching over half a million followers within weeks, British Vogue said, adding the filter continues to generate traffic today. British Vogue is now working on a similar projects with a number of other brands, including Salvatore Ferragamo.

Advising brands on how they can become a part of the public conversation around social responsibility and social justice in an authentic way has also become an important part of Kingori’s role, she added. 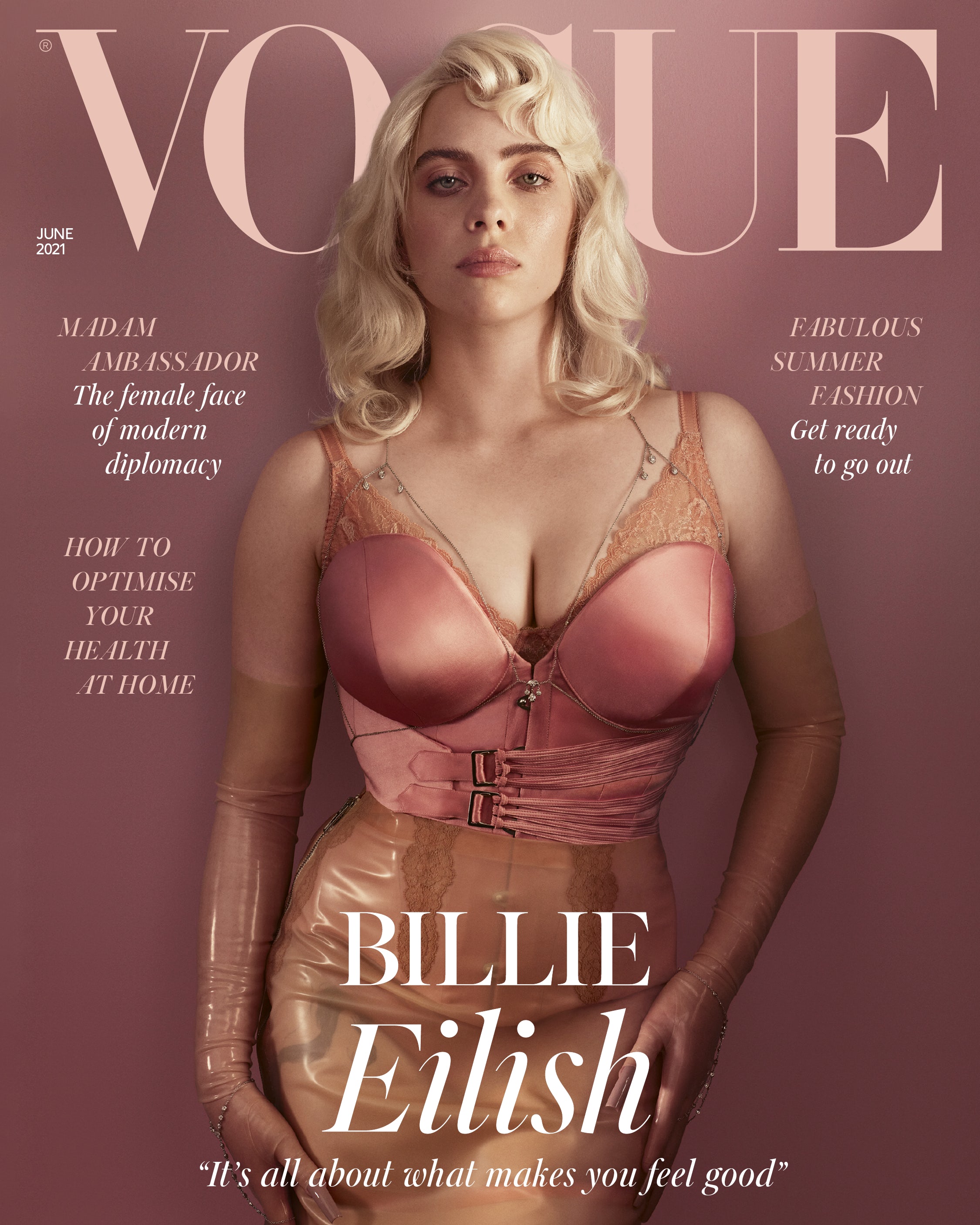 Kingori also worked with Enninful to expand the magazine’s areas of coverage, bolstering watches and jewellery content, with Enninful in turn appointing new motor and technology editors. The idea was to cater to all aspects of their readers’ lives, not just fashion and beauty. Today, new content verticals are among the fastest growing categories online.

Print, however, continues to be the beating heart of the British Vogue brand. Investing in print has actually helped fuel digital engagement, said Kingori, noting that British Vogue’s biggest digital upturns and largest volume of collaboration requests from brands consistently coincide with the release of the magazine each month.

Just look at Billie Eilish’s June cover this year, where the singer traded her signature baggy clothes and neon-green roots for a 1950s pin-up style lingerie look and soft blonde curls evocative of an Old Hollywood movie star. When the images dropped, they sent the internet into a frenzy, breaking Instagram records. But beyond Instagram, the print edition was flying off the shelves — an increasingly rare occurrence in today’s digitally driven world, where attention spans are short and readers are used to consuming content for free.

“We sold out on the newsstand so many times, we had to pull office copies, gifted copies, etc. to keep trying to feed the newsstand. And it just kept selling out,” said Kingori. “For me there is no digital marketing that you can do that will be more effective. Our print magazine is our biggest marketing tool, and our social media platforms are our biggest agent.”

The September Issue Gets an Overdue Makeover