LONDON, United Kingdom — Two Sundays ago, The New York Times came with a curious Louis Vuitton advertisement. Not a new campaign, but a reprint of a campaign shot in Tibet back in 1998 by photographer Jean Larivière, featuring children wearing monogrammed backpacks and astronaut helmets that looked strangely pandemic-friendly.

Again, in this Sunday’s New York Times was another Larivière-lensed Vuitton campaign, this one shot back in 1997 on Inle Lake in Myanmar. The French label has also taken to Instagram to post images from old campaigns, shot by the likes of Annie Leibovitz, Carter Smith and Peter Lindbergh. Many of the images tap into our longing for travel, one of Vuitton’s core brand attributes, which lockdown measures have put out of reach.

But while its focus on travel is unique, Louis Vuitton isn’t alone in mining its archives. As the pandemic keeps many fashion creatives homebound, several major luxury brands are taking trips down memory lane and republishing old campaigns.

A recent series on Saint Laurent’s Instagram account featured images shot over the past five years by the likes of Collier Schorr and Inez & Vinoodh. Versace, no stranger to nostalgia, has also been using its Instagram to showcase a series of campaigns shot by Richard Avedon in 1995, 1996 and 1997 featuring Claudia Schiffer and Naomi Campbell. Burberry, too, has posted advertising from decades past to social media in recent weeks, as part of a ramp-up of the brand’s #BurberryHeritage campaign.

Recycling old campaigns is an interesting strategy at a time when social media’s penchant for tapping into our collective nostalgia has given rise to highly popular Instagram accounts celebrating fashion from the 1970s, 80s and 90s — like @90sanxiety and @velvetcoke — and social distancing measures, along with tightening marketing budgets, have made it harder for some labels to shoot new campaigns the way they once did.

Brands were reluctant to speak, but Donatella Versace addressed the phenomenon. “In the past years, people have shown great interest about the history of Versace,” she said in a statement. “We thought that [by running archival images on our Instagram account] we could give them a sort of escape from reality, respecting at the same time the fact that we could not shoot ad hoc content in any case and that the moment was — is — a unique one.”

Licensing agents who have access to unpublished shoots that were cut by publications (or were produced on spec by photographers) have become crucial collaborators for brands — as well as media titles — providing imagery that’s safer and cheaper than commissioning original content.

Trunk Archive — an image licensing agency that represents fashion photographers like Ethan James Green, Nadine Ijewere and Nick Knight and works with brands including Chanel and Dior and magazines such as Vogue and Elle — has seen an increase of 50 to 60 percent in requests to license unpublished work over the past two months. 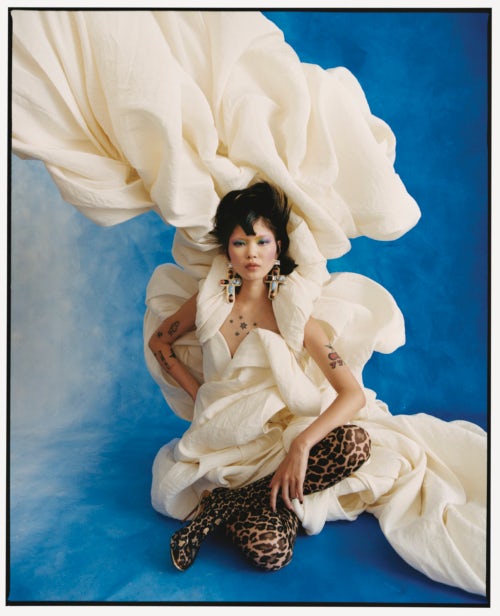 “These brands are continuing to sell their goods and they need to find a way to market themselves,” said Trunk Archive’s Executive Vice President Leslie Simitch. “They can't create what they normally do.”

As a result, brands and magazine photo editors have more openly shared briefs with licensing agents. In most cases, they use the images as they are. But some ask creatives to adapt the images to better suit their specifications.

“The clients are really happy because we haven't missed a beat,” said Fina. “We're still on really aggressive timelines and we're meeting those deadlines, which is very important.”

Creatives locked at home, many of whom are struggling to find paid work, are also benefiting from the surge in requests to license old content.

“It's not like you make the same amount of money selling an image as you would actually shooting the campaign,” said fashion photographer Pamela Hanson, who has seen an increased demand in old work over the past few weeks. “But it's better than nothing.”

While photographers and models may reap some reward from the images they sell, for hairstylists and makeup artists, who don’t have the rights to the images they help create, compensation for licensed photographs is often minimal, if anything at all.

As markets across the world brace for a deep recession, putting further pressure on budgets, the uptick in the sourcing of imagery from archives and licensing agencies will likely continue well beyond the current lockdowns.

“I think the clients have seen what we're able to do,” said Fina. “And we'll continue to ask ourselves: is there another way to spin what is already available?”