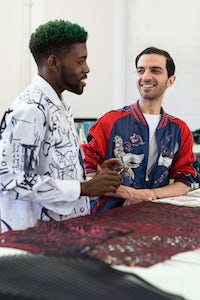 BoF's Imran Amed visiting with a student at the Savannah College of Art and Design. | Source: Courtesy of SCAD
Share
2 Comments
By Lauren Sherman April 14, 2017 05:30

SAVANNAH, United States — As shifting consumer behaviour and transformative technologies continue to shake the fashion industry at its core, permanently destabilising its long-established business models, how can students looking to break into the industry properly prepare for an uncertain future? In a wide-ranging conversation at SCADstyle 2017 — the Savannah College of Art and Design’s annual ideas festival, which includes talks, exhibitions and events at its Savannah, Atlanta and Hong Kong campuses — BoF’s founder and chief executive, Imran Amed, imparted insights drawn from more than a decade studying, reporting and writing about fashion.

So, what are the key insights for students looking to enter the workforce as the disruptors, not the disrupted?

Understanding the business is as important as loving the medium.
Fashion is a seductive industry because it is driven by aesthetics. But in order to succeed, one must think holistically. “The glamour and the gloss is what attracts people to this industry but it can become dangerous if that’s all you’re interested in,” Amed noted. “Learn how the business works. In order to understand your role in the fashion business, you have to understand the entire value chain of fashion, not just the glossy stuff. The glossy stuff is not enough.”

A big follower count is only valuable if you do something with it.
Brands and designers have shifted their marketing efforts to social media, but racking up a large amount of followers only helps if it drives engagement.

“If you have followers, that’s one thing, but to be genuinely influential, impactful, you have to use that follower count in a way that can shift and shape things,” he said. “It’s about people who take their following and use it in a way that can change the course of the industry or spark a dialogue.”

Consider Edward Enninful, the incoming editor-in-chief of British Vogue, whose “I Am an Immigrant” PSA for his current employer, W magazine, made waves this past February. “Edward’s influence didn’t come from having the title, ‘Editor of British Vogue,’ or his half a million followers. It came from what he did with his position in the industry. He has used his followership to drive conversation.”

Amed also called out supermodels Gigi Hadid and Karlie Kloss — who use their platforms as a communication tool, not just a branding opportunity — as shining examples. “If you take a look at what Gigi and Karlie do, they’re also role models,” he said. “They’re using their platforms to influence the way young women see their futures.”

Technology can propel a fashion brand or store forward, but only if it’s used in a considered, meaningful way.
From artificial intelligence to wearable technology, the fashion and retail industries are now more open to experimenting with new technology. But not all technology advancements will make sense as a business. “As technology has become a widely used buzzword in our industry in recent years, brands want to be seen to be using technology. People are doing it for the sake of using technology as opposed to using it with a real specific goal that impacts what their business is trying to accomplish,” Amed said. “I am not a futurist, I can only surmise that one of the best ways to use some of these new technologies is for storytelling. This is an industry that creates content and powerful imagery that inspires and touches people, and if technology can enhance that it can be very useful."

"To the extent that some of those technologies can be used to tell stories, that’s where people should go," he added. "But I think we have to be really cautious that these technologies can be applicable to every company.” For instance, “Every brand doesn’t need to be on every [social media] channel.”

Luxury brands must learn how to service consumers looking to transform themselves both spiritually and physically.
The rise of the experience economy correlates with slower growth for the luxury industry, which must learn to woo customers in ways that go beyond exceptional product. “The most luxurious product we have is ourselves,” he said. “They’re thinking, ‘How can I be a better person? How can I be healthy? How can I manage the rigours of everyday life?’ A lot of people’s closets are jammed with so much stuff. Now, people are looking to spend that money on more than stuff: making oneself better or making the lives of other people better.”

Amed called this stage of consumerism “beyond self-actualisation”, a bubble that sits on top of the pyramid of Maslow’s hierarchy of needs. “It’s about finding that thing you can do that can make a dent in the world,” he said. “Perhaps luxury is in a bit of trouble as more and more people shift away their focus from things.”

Businesses must be socially, ethically and environmentally responsible, or risk consumer backlash.
A more direct relationship with the consumer means that companies have to be more honest with the consumer, whether that means a CEO speaking out against President Trump’s proposed immigration policy even if he has chosen to remain politically neutral in the past, or for a fast fashion conglomerate getting smarter about reducing waste and improving working conditions for employees, even if it’s going to continue to sell cheap clothes.

“Consumers are holding these businesses accountable,” Amed said. “Every little step you take, every little opportunity you look for to reduce waste can have a huge impact… Whether or not you believe in fast fashion, these companies are growing and they’re not going away. A more pragmatic way to look at it is, “How do we engage with them in a way that’s productive so that they are incentivised to continue to do so?”

Disclosure: Lauren Sherman travelled to Savannah as a guest of SCAD.

6 Fashion Careers of the Future

6 Tips for MBAs Trying to Break into the Fashion Business