LONDON, United Kingdom — In September 2014, two years prior to the contractually agreed end date, Kering terminated its licensing deal with the Safilo Group, an Italian manufacturer and distributor of eyewear. Kering’s decision to move its eyewear business in-house was dubbed a “revolution” by an Exane BNP Paribas report on the matter. But what are the wider implications for the eyewear market, and how will the market develop in the coming years?

Eyewear is big business. Market sources estimate that the global market, which includes frames, contact lenses and sunglasses, is worth $90 billion, and will reach $140 billion by 2020. In 2012, Exane BNP Paribas estimated that frames and sunglasses represented 40 percent of the eyewear market. Within that segment it estimates that premium frames and sunglasses, the sort produced by fashion labels, represent 35 percent. Applying those estimates to today’s market values the premium fashion segment at just below $13 billion.

Traditionally, five specialist eyewear players have dominated the premium fashion segment of the market, developing, manufacturing and distributing their own brands, as well as entering into licensing deals to produce frames for fashion houses. Although the terms of these deals vary, the specialist players typically design the eyewear, with input from the brands, before developing, manufacturing and distributing it in the market. 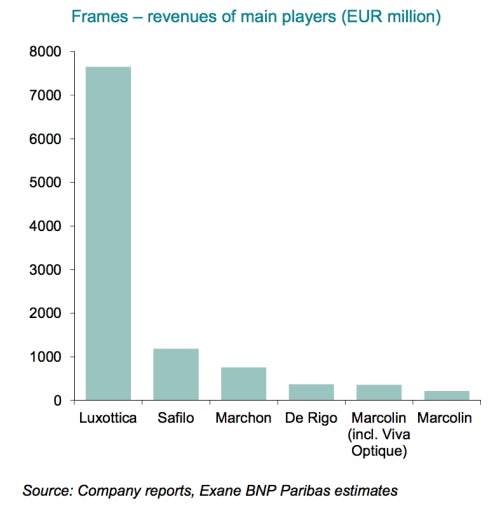 Luxottica, the dominant frame producer, owns a portfolio of eyewear brands that includes Persol and Ray-Ban, the latter of which is the biggest brand in the market. It holds the licenses to produce eyewear for global fashion brands such as Chanel, Armani, Prada and Michael Kors and manages the distribution of its products through 200,000 wholesale doors. In 2014, the Italian company generated over €7.6 billion (about $8.5 billion) in revenue. In addition, Luxottica owns the Sunglass Hut retail brand and is a retail company in its own right, with over 7,000 stores worldwide, giving it a majority share of the eyewear market.

The second biggest player, the Safilo Group, holds licenses for Dior, Fendi, Céline and Marc Jacobs. It employs more than 150 designers, adding more than 3,000 new models to the market a year, sold through a network of 90,000 wholesale doors. The company reported €1.17 billion (about $1.33 billion) in revenue in 2014 and annual growth of about five percent.

In September, Kering told press, “The current size of the Kering brands’ business is roughly €350 million [making] Kering one of the top five players in this industry… Kering will fully control the eyewear value chain, from design to product development and supply chain, and from branding and marketing to sales.”

But why did Kering choose to go it alone? In the statement announcing the launch of its eyewear division, Kering highlighted that, "The premium segment of the eyewear business is currently growing in the high double-digits."

The importance of eyewear as an entry-level product for its brands speaks to the other key advantage stemming from Kering’s move: control. The Exane BNP Paribas report states, “The ubiquitous distribution typical of most license contracts adds to brand trivialisation risk.” By taking its eyewear in-house, controlling development, distribution and sales, Kering could “maintain desirability through perceived exclusivity.”

What's more, Kering is now free to work with multiple manufacturing partners — including the Safilo Group — on a case-by-case basis. This freedom will allow the company to build out each of its eleven brands’ eyewear businesses in a way that is carefully tailored to the consumer profile and DNA of each brand.

A Question of Scale

The scale of Kering’s eyewear business is significantly smaller than that of Luxottica and Safilo. “The major challenge in eyewear is to serve a very fragmented customer base — reaching it with sales and logistics is expensive and demands local scale. Building scale is important for Kering as it will operate at a commercial and distribution cost disadvantage versus Safilo,” says Luca Solca, head of luxury goods at Exane BNP Paribas.

Kering is not the first luxury group to bring its eyewear business in-house. In 1999, Prada ceased licensing its brand to Luxottica and formed its own eyewear company, Eyewear International Distribution S.A, in partnership with De Rigo. The venture was short-lived. When Prada ended its dealings with De Rigo in 2002, to return to Luxottica, the joint venture company's sales stood at $33.6 million. At the time, Luxottica said in a statement that it expected Prada’s eyewear sales to jump to $120 million in its first year back with the company: clear evidence of the power of Luxottica’s distribution network.

Indeed, although Kering has a global network of stores (respectively, Gucci and Saint Laurent had 408 and 91 monobrand points of sale in 2014, according to statistics compiled by Exane BNP Paribas), it pales in significance compared to the own-retail network of Luxottica. In the unlikely event that Luxottica, the largest eyewear retailer in the world, stopped buying Kering eyewear, Kering would lose key distribution points, especially outside of its own stores in North America. Furthermore, Kering would have to develop wholesale relationships with local eyewear retailers to achieve full reach: most small regional towns have an optician — few, however, have a Gucci store.

“If you're coming in new and you're trying to leverage a brand, I think you have a very long way to go. It's very difficult to build a solution, work-wise, when your three largest competitors could block you out of parts of the market,” said Claudio Gottardi, chief executive of Marchon. “The question is: What could a new entrant into the market offer that will allow that company to enter the market without a return for the people who they are going to be competing [with],” he continued.

“The market, structurally, globally, is really growing,” said Luisa Delgado, chief executive of the Safilo Group. “On one side, it’s driven by demographics: the development of certain markets where an increasing middle class is getting access to interesting brands. But then there's also education, an ageing population: it [all] stimulates the growth of our industry,” she continued, highlighting how higher rates of education and longer life expectancy are increasing the demand for prescription glasses.

To capitalise on this growth, the eyewear market’s biggest players have expanded internationally — and continue to do so. “In 2009 I started opening sister companies across the globe,” said Marchon’s Gottardi. “I went directly to China, Singapore, Portugal, Scandinavia, Turkey, Saudi Arabia and all of the [Arabian] Gulf. Just to give you an idea, in Brazil, our revenues are about six times higher than four years ago.”

“Expansion into market areas, especially in emerging markets, has been the biggest driver of our growth over the last five years,” said Massimo Vian, co-chief executive of Luxottica. Indeed, Luxottica’s Q1 2015 results for Asia-Pacific and Latin America reported growth of 18.7 percent and 21.7 percent, respectively. Luxottica is also treating North America as an emerging market, in terms of potential for further penetration.

And then there is the digital opportunity. Due to the product's small size and one-size-fits-all model, eyewear is well-suited to digital retail, creating further opportunity for growth. “We have been active as a company over the last three years, with the Glasses.com acquisition [in January 2014] and the new Ray-Ban [digital sales] platform,” said Vian. Tapping into the current consumer trend for customisation, the platform allows consumers to choose any combination of lens, frame style and colour. “That service has been growing 100 percent year-on-year, starting from a relatively low base and small numbers, but it is developed enough to understand the potential of that channel,” Vian continued.

Clearly, new markets, emerging consumer demographics and new product streams are driving growth across the eyewear market. These drivers are particularly germane to the premium fashion segment — a fact Kering is well aware of. As an established player in the eyewear market, Kering has powerful, pre-existing relationships between its brands and global consumers, but it will need to operationalise this in a market with additional distribution channels in order to compete with the incumbents.