LONDON, United Kingdom — In today’s fashion landscape a new stream of designers are propelling the streetwear category beyond branded reinterpretations of staple items such as t-shirts, hoodies and outerwear — and positioning themselves between the blurring boundaries of streetwear and high fashion. Among them is 24-year-old English designer Samuel Ross, whose 18-month old fashion label, A-Cold-Wall, is inspired by his experience of the British class system.

“I remember crying over a Nike bag when I was young because we didn’t have enough money to buy it. By 15 I was making fake Nike and Adidas clothing, which I would then sell to friends,” says Ross, recounting his first interaction with fashion and product design. 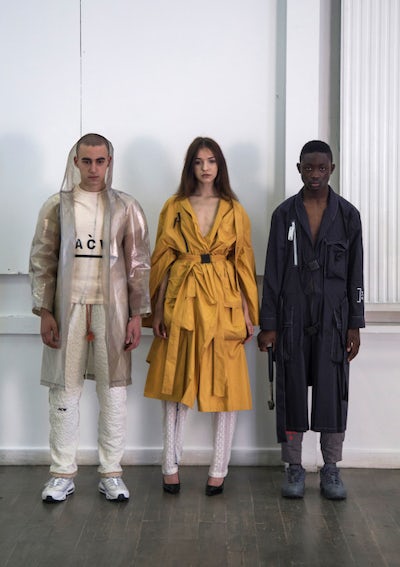 At the beginning of his career, Ross balanced his professional work with his own creative output, which spanned experimental film, street art and a streetwear label named 2wnt4 — which he set up with longtime friend Andrew Harper. It was during this creative period, in April 2013, that Ross crossed paths online with streetwear connoisseur and Off-White founder Virgil Abloh, who was instantly drawn to the young designer’s creative vision.

“Virgil thought my work was good because there was a multi-faceted language that I was working in, from illustration and graphic design, to film and product design. I was accumulating all these different avenues into this unconscious zeitgeist moment,” explains Ross. After an email exchange with Abloh, Ross quit his job, left his flat and moved back to London, to become his creative assistant.

For two-and-a-half years Ross travelled around the world with Abloh, learning how to achieve aesthetic consistency while working across various creative endeavours — including Off-White collections, store installations and print designs for Shane Oliver’s Hood By Air. During this time, Ross was impressed with the creative freedom and heightened levels of expression that New York and LA based labels such as Pyrex, Hood By Air and Fear of God had found success in the market place with.

In 2015, having observed that London lacked a parallel movement, Ross founded his entirely self-funded label A-Cold-Wall. “A-Cold-Wall is the feeling I had rubbing my hand against a pebble dash wall at a council estate, yet it’s just as important and relative to someone who is brushing their hand against a slab of marble in the upper sections of society. These are both experiences unique to Britain,” says Ross. “There has always been this relationship with clothing in the British working class, however Britain hasn’t had a refresh in what this stands for in a while now. People still think about hooligans but there are these other really rich subcultures that haven’t been told and I’m just telling that story,” he continues.

Manufactured in a local East-London factory in the UK, Ross’s line ranges from hand-dyed tees priced at £88 (about $128), to purposefully crude nylon sweatshirts at £205 (about $298), to his rendition of an overcoat, which replaces classic herringbone with 15-ounce deconstructed canvas for £540 (about $785), made by his cousin — an experienced tailor.

After Ross launched e-commerce in April 2015, his business quickly became profitable. “A lot of product nowadays is produced by people who are looking inwards to the sandbox, whereas I’m from the sandbox. It’s not a forced conversation, which is why it resonates with people so easily,” says Ross.

Following the establishment of the label’s e-commerce site, Ross received a number of offers from retailers who hoped to stock the line. However, despite significant interest, A-Cold-Wall’s class-clashing workwear is available in only six stockists worldwide, including United Arrows in Japan, IT in Hong Kong and Harvey Nichols in the UK.

The lines limited points of sale is due to Ross’s requirement that stores provide him with a creative space in which he can stage installations and play soundtracks and curated films, next to where his line is displayed. “The verbal explanation for A-Cold-Wall can be a bit dense and complicated, however [the] installations offer this physical experience in which consumers are presented with a living moodboard that doesn’t drown them in information,” says Ross.

Looking forward, Ross and his right-hand man Harper, hope to slowly expand the lines stockists, by working with a small number of additional high-end retailers while growing the business horizontally, “expanding into a wider array of products that encapsulate both the brand’s lifestyle and ethos.”