With foreign reserves declining ahead of elections in July, Pakistan’s government is under pressure to revive its exports. Could Artistic Denim provide a solution?

KARACHI, Pakistan — A denim factory in Karachi could hold the key to reviving Pakistan’s ailing exports.

With many retailers shifting textile orders to cheaper and more timely suppliers in rival Bangladesh and Vietnam, Pakistan’s manufacturers have long-suffered from power cuts, an expensive exchange rate and what they claim is government indifference. Yet while hundreds of factories have shut down in recent years, shedding more than half a million jobs, Artistic Denim Mills Ltd., which operates as a one-stop shop turning cotton into jeans, is doubling production and has built a new factory in Pakistan’s financial hub.

Chief Executive Officer Faisal Ahmed is bullish and supplies retailers such as Zara and Next Plc. He points to one key decision — unlike most industrialists, Artistic Denim started by making garments about 25 years ago instead of just shipping spun yarn or fabric. Now “we have been able to get many orders that used to go to Turkey earlier,” he said at his office in an industrial area.

The move shows a rare sign of promise in a stagnant industry that has been part of Pakistan’s economic backbone for decades. Pakistan is among the top five growers globally and cultivated has been cultivated on these lands for at least 5,000 years. Typically Pakistan has been mostly converting cotton into thread and fabric that is shipped East to other Asian countries, which then manufacture the final garment.

With foreign reserves declining ahead of elections in July, Pakistan’s government is under pressure to revive its exports and avoid going to the International Monetary Fund for what would be its 13th bailout since 1988. The textile industry is key as it accounts for more than half of all overseas shipments.

Pakistan has lost market share with exports growing 27 percent during 2005 to 2016, falling behind Bangladesh’s 276 percent increase and 445 percent in Vietnam, according to World Bank data. India is the second-largest apparel exporter in South Asia after Bangladesh. Nonetheless, Pakistan still has the advantage of homegrown cotton that it can capitalize on, unlike Bangladesh and Vietnam.

Pakistan's textile industry is key as it accounts for more than half of all overseas shipments.

Pakistan is targeting its first export jump this financial year after giving tax breaks to exporters, in a bid to reverse a three year slump with value added products like denim getting the biggest incentives, Mohammad Younus Dagha, secretary at the Commerce Ministry, said in an November interview.

Textile industrialists have continually lobbied the government for subsidies and incentives. Yet despite last year’s measures, Prime Minister Shahid Khaqan Abbasi said in an interview this month that no further giveaways to the industry were likely before the elections.

“Bangladesh and Vietnam governments are giving huge support to industries, unlike ours,” said Ahmed Lakhani, analyst at Karachi-based JS Global Capital Ltd. “The tax breaks are a good step, but we need to decrease electricity tariffs and keep a check on wages. I don’t think we will give all those incentives and compete globally.” 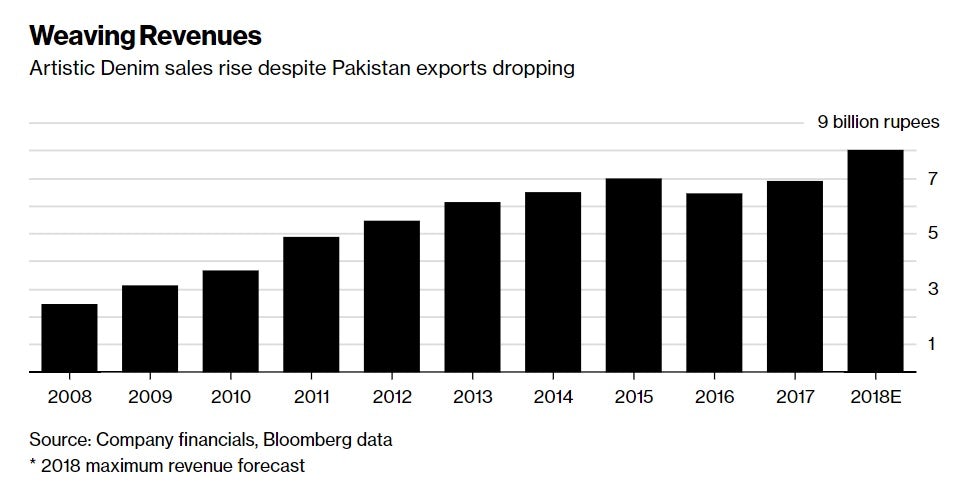 Some textile executives say that they have been lazy and have fallen behind market trends, opting instead to pester the government for subsidies.

“About 95 percent of Pakistani exporters mentality is waiting for a customer rather than going out and finding them,” said Majyd Aziz, president of MHG Group of Companies in Karachi. “In the global world, you need integration and economies of scale, if you do that, you make money.”

Artistic Denim is one of them. It has chased premium brands in Los Angeles that pay more for smaller deliveries to keep changing designs rather than bulk orders. The company said this will help revenues reach as much as eight billion rupees ($72 million) in year ending June with new garment production capacity increasing sales.

“Pakistan’s denim is on an upward trend, despite the larger textile industry being in trouble,” said Ahmed. “Pakistan has a tremendous opportunity.”