ATLANTA, United States — Reese Blutstein is a 21-year-old woman living in Atlanta, Georgia, with mahogany-coloured hair and just a hint of a southern drawl. Her more pronounced affectation, though, is one of a teenager’s. She laughs in the sort of surprised, crackly way only someone without pretensions or expectations can.

Blutstein’s wardrobe, however, is more than a little bit precocious. Her eye for great vintage and a natural ability to self-style sophisticated pieces from Loewe to Lemaire is documented on @double3Xposure, an Instagram account she created three years ago for herself and her twin sister, Molly, who abandoned the project when she set off for university. (You can now find the other Blutstein posting occasionally via the handle @mollyblutstein.)

It may have taken a few years — or a dozen or so seasons in fashion-world parlance — but the industry has finally cottoned to Blutstein. During the Spring/Summer 2018 shows in New York, she attended Calvin Klein and Maryam Nassir Zadeh, among others. In Paris, she sat at Lemaire and Dries Van Noten via a paid partnership with the indie e-commerce site Need Supply. “It was different than I thought it was going to be,” Blutstein says of her first fashion week experience. “In Paris, there is more genuine style. It's not necessarily about people standing outside of the shows, it's more about the shows.”

Deft observations aside, what makes Blutstein unique may not be her cool-girl persona, or her sun-washed images. (Her friend, Jennifer Grimm, takes most of the photos; her boyfriend picks up the slack.) Instead, it’s the fact that, despite only clocking roughly 155,000 Instagram followers, her engagement is almost twice that of the average fashion “influencer”, according to data analytics firm Tribe Dynamics. In 2017 so far, she has garnered 1.6 million likes on 258 fashion-related posts.

Blutstein’s success represents the rise of a different kind of influencer, one who may not ever reach the followership of the major players — many of whom are now full-fledged celebrities — but who brings an aura of authenticity to the brand projects she takes on. Call them micro-influencers, niche-influencers, alterna-influencers, what-have-you, these Instagram, Youtube and Snapchat stars typically have well under 200,000 followers, and sometimes no more than 10,000.

Some of these alterna-influencers — such as photographers Jamie Beck (@AnnStreetStudio) and Tamu McPherson (@tamumcpherson) as well as stylist Shiona Turini (@shionat) — have been in the business for years. Others, including Blutstein and model Paloma Elsesser (@palomija), are newer to the game. But what they all have in common is that their followers tend to be engaged and passionate, often more so than those of mass influencers with 500,000 followers or more.

If you think it’s an ad campaign, then you should just spend the money on traditional marketing.

(Engagement, in this case, is measured by factoring in the average number of likes on a single post for 2017 and the number of overall followers an influencer has attracted. In many cases, influencers with fewer followers see a higher ratio of likes per post.) 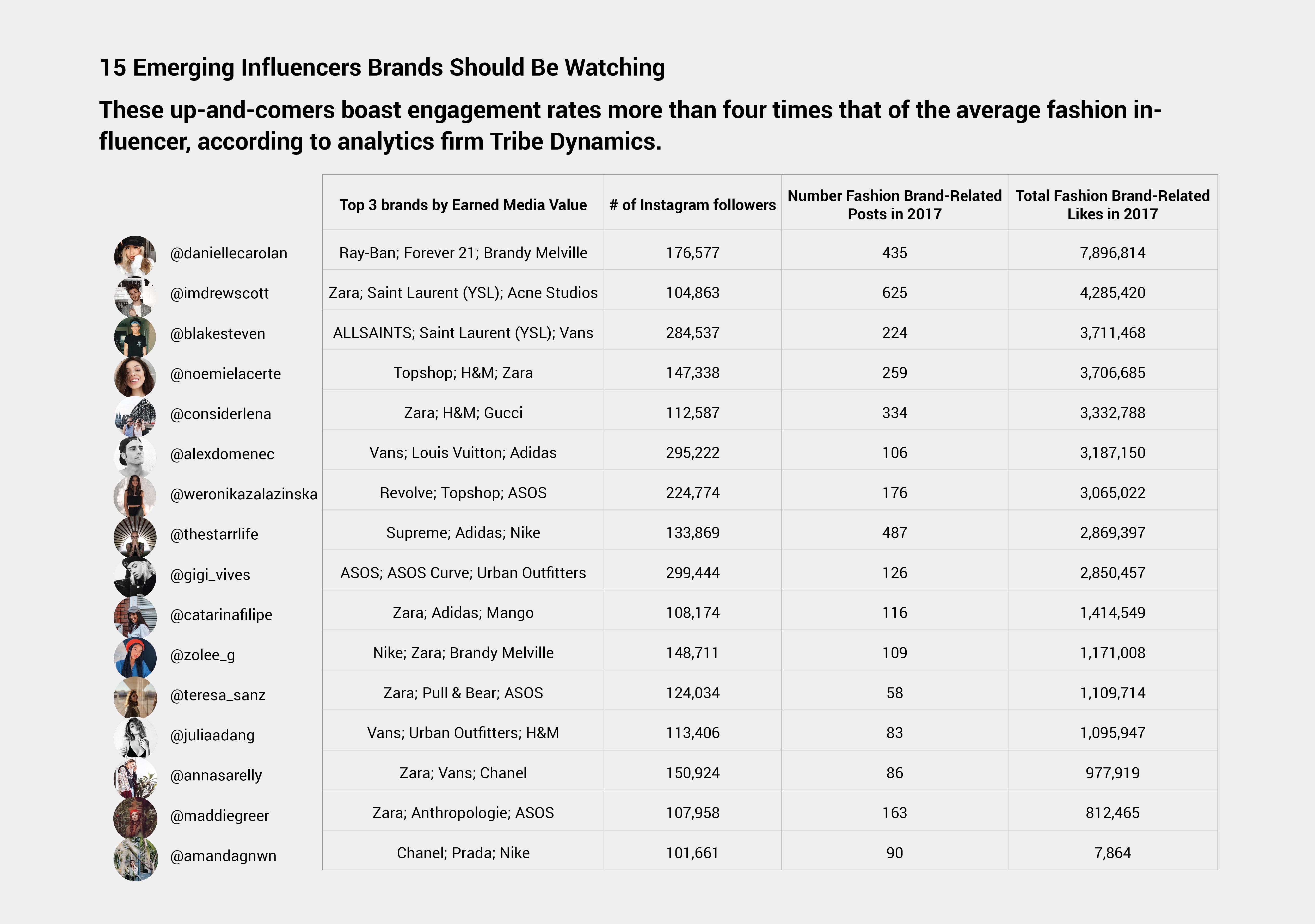 “As a consumer of that content, I think it’s a really inspiring space right now,” says Christene Barberich, global editor-in-chief and co-founder of Refinery29. “There is a lot flexibility and a lot of freedom in how these influencers see fashion and how they integrate fashion into their lives. While there are exceptions, the first wave of big online influencers became somewhat commodified and very controlled in terms of creative output.”

To be sure, some forward-thinking brands are eager to partner with the next generation of influencers instead of relying on standbys whose audiences have lost interest. “The coolest brands, the ones that don’t necessarily need to be seeking out someone new, are generally the ones that are,” says Max Stein, managing director of Brigade, which represents a wide variety of influencers, including Turini, Man Repeller’s Leandra Medine, Of a Kind co-founders Claire Mazur and Erica Cerulo, as well as Blutstein, whom he partnered with about a year ago. One of the first projects Blutstein did was with Proenza Schouler. “Cool brands don’t want to wait,” he adds.

But while engagement on their posts might be higher, do alterna-influencers compel consumers to shop at the same rate that mega-bloggers do? Affiliate marketing programs such as rewardStyle allow brands and retailers to track conversions, or sales that are generated from a link posted by an influencer. Not only can a brand see how many sales were generated and how much each sale was worth, but it can also tell if the customer went on to buy more products. A 2016 study of 26 top beauty retailers found that 70 percent of overall referral traffic came from affiliate marketing links.

However, at MatchesFashion, which taps influencers to fill its editorial programming both online and off, little attention is paid to follower numbers. “It matters more that they have something interesting to say,” says Jess Christie, who runs public relations and marketing at the multi-brand retailer. “We look really, really hard for different people globally.”

Recent installments of the website’s “Shop With…” series — a well-designed product page curated by an influencer — have featured Turini, Singapore-based designer Yoyo Cao and French actress and model Aymeline Valade. While Valade has just over 43,000 followers on Instagram, her page generated more unique views than any other influencer the brand has worked with on this particular project.

MatchesFashion has found that “editorial is much more powerful than brand advertising,” Christie says. Dwell time on what the retailer calls the “social” sections — including editorial and digital trunk show pages — is 150 percent higher than on the rest of the site. Conversion is double on these pages, and the average order value increases up to 40 percent on average. “It’s that sense of discovery,” she adds. “It’s the same approach we have with designers.”

It’s also a shrewd way to market. While every contract is negotiated on a case-by-case scenario, MatchesFashion tends to award its influencers with a conversion-based commission rather than an upfront fee. This compels the influencer to promote the project within her own channels, and to put a greater overall effort into it.

For the agents representing the talent, affiliate arrangements are worthwhile if it’s the right kind of exposure. “I’m not opposed to it if I know the brand does beautiful content,” says Delphine Del Val, founder of creative agency Pool Presents, which represents Garance Doré, musician and creative consultant Brianna Lance, artist Ana Krâs, Modelfit co-founder Vanessa Packer and others. “If we do a project with a brand and it sells out, word spreads, and then I can negotiate a fee that is much higher the next time. It’s helping the [influencer’s] business grow in the right way.”

And those businesses are indeed growing. Advertisers spent an estimated $570 million on Instagram influencers alone in 2016, according to research firm eMarketer. About half of those advertisers said they planned on increasing budgets in 2017.

In an ironic turn of events, it seems that alterna-influencers are usurping advertising and marketing dollars from well-known superstar bloggers in the way those bloggers once usurped print magazines. But does it always make sense to work with an alterna-influencer?

Just as some brands still believe buying a page of advertising in a legacy print magazine is a worthy investment, mega-influencers still offer exposure to a wider audience. (And some — most notably, Los Angeles-based influencer Aimee Song — are known for their ability to move product swiftly off the virtual shelves.) That’s why Tapestry-owned Kate Spade New York takes a two-pronged approach to its influencer marketing.

There are influencers whose job is to advertise on Instagram. There are others who use social media to communicate. It’s two very distinct things.

Recently, the brand partnered with 1.9 million-follower-strong Man Repeller on a three-day, leopard-themed pop-up shop in Manhattan, which featured spotted products and a live Q&A session with its founder and chief creative officer, Medine. (She was joined onstage by Kate Spade New York chief creative officer Deborah Lloyd, who recently announced her imminent departure from the label.)

That, however, was only the first phase of the project. Next, Kate Spade New York tapped twelve influencers from local markets — ranging from 50,000 followers to 600,000 — to host in-store events in their regions. “It’s about working with a small number of folks in a strategic way,” says Kate Spade chief marketing officer Mary Beech. “It’s a more thoughtful approach. Influencers help us express our products in a stylistically unique way, often increasing revenues by the double digits thanks to click-throughs.”

To be sure, using influencers with small audiences to amplify the message of a more well-known entity can certainly work in the favour of a brand. But no matter the size of the following or the strategy behind the project, there is one through-line: effective influencers — those that can sell clothes — have a clearly defined point of view. Influencer campaigns are most effective when he or she is permitted by the brand to wholeheartedly express that point of view. “If we want to tell our own story and control it, we don’t need to partner with an influencer,” Beech says. “We have our national campaign and our own social media channel for that.”

“If you’re a brand and you a want to work with someone, make sure it’s someone you trust,” Stein adds. “If you think it’s an ad campaign, then you should just spend the money on traditional marketing. If you try and control the process and the outcome, you may align, but you may also end up with a product that doesn’t resonate.”

Of course, influencers also benefit from successful brand partnerships. As their public profiles grow, so often do their followings. So how can these newly beloved influencers prevent their personas from going stale?

One rule of thumb is to hone a talent, or a passion, beyond posting content. Medine is a writer who has transformed Man Repeller into a media platform. Doré is an illustrator. Beck is admired for her skilled photography. “I believe in representing talent,” Del Val says. “There are influencers whose job is to advertise on Instagram. There are others who use social media to communicate. It’s two very distinct things.”

Blutstein, who is taking a break from college to explore fashion, is unsure of where her stint as an influencer will take her. “I don’t even know how long Instagram will be a thing,” she says. “It’s amazing, the kind of people that I have gotten to meet doing this. I just hope that I can hold on to that.”

Five High-Impact Niche Fashion Influencers
BoF enlisted digital solutions agency Preen.me to track engagement around five of the industry's most compelling niche influencers, and to determine which brands those influencers are talking about most. 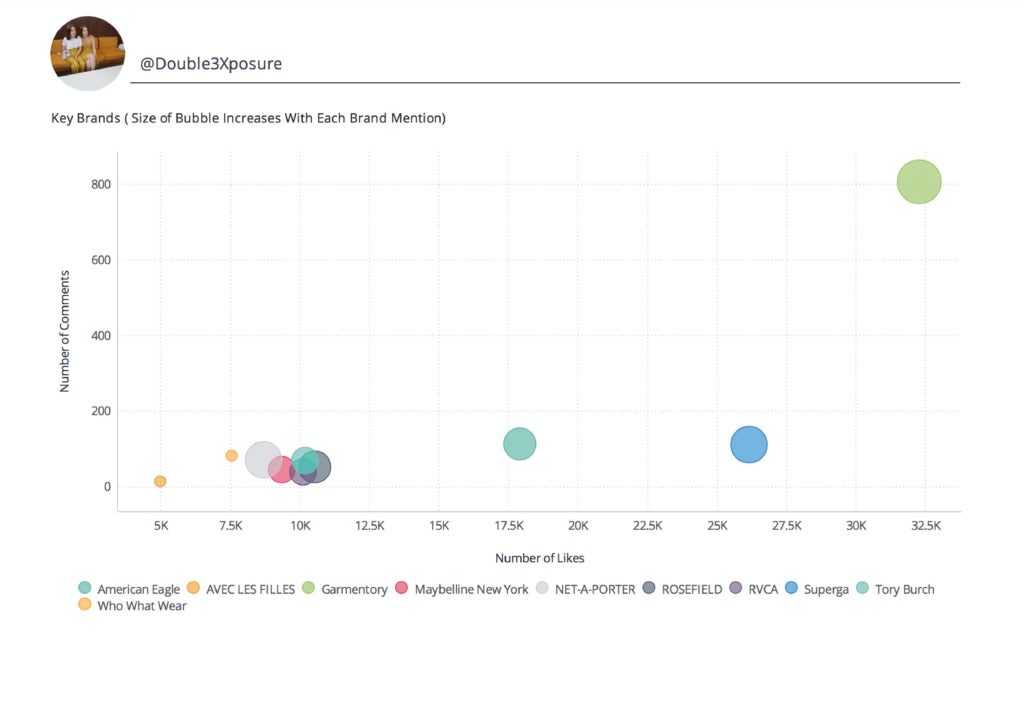 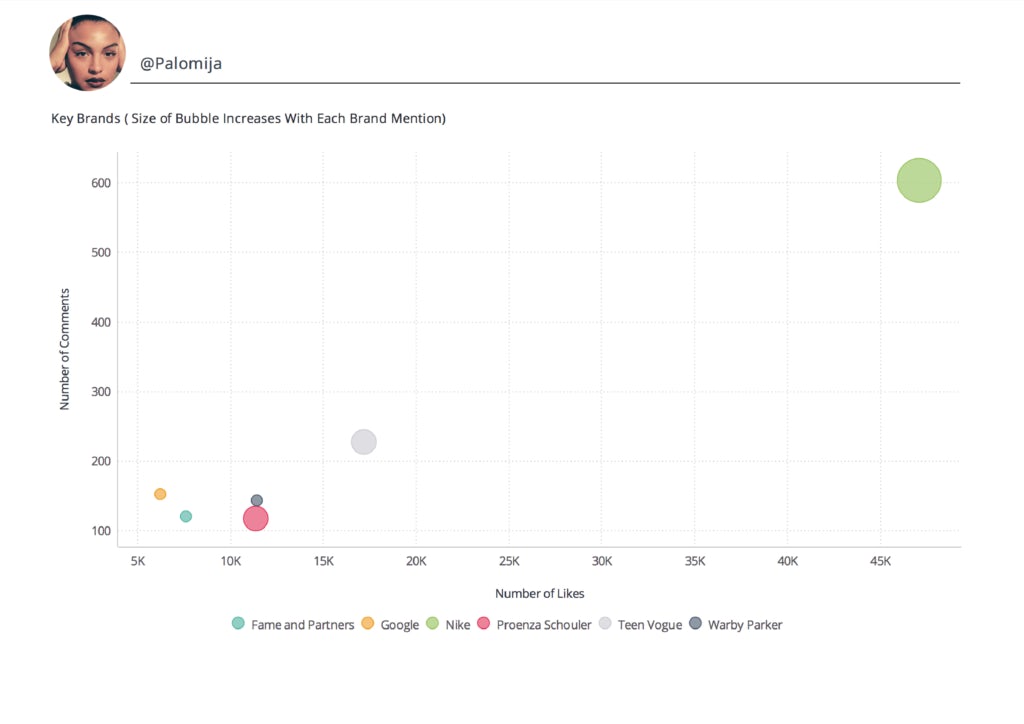 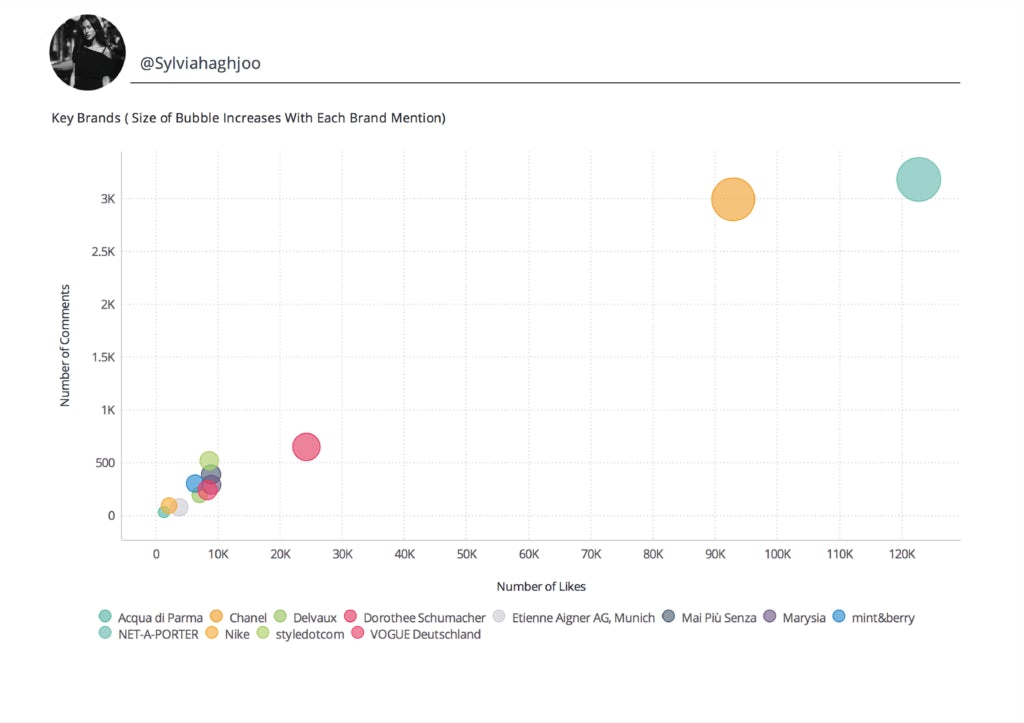 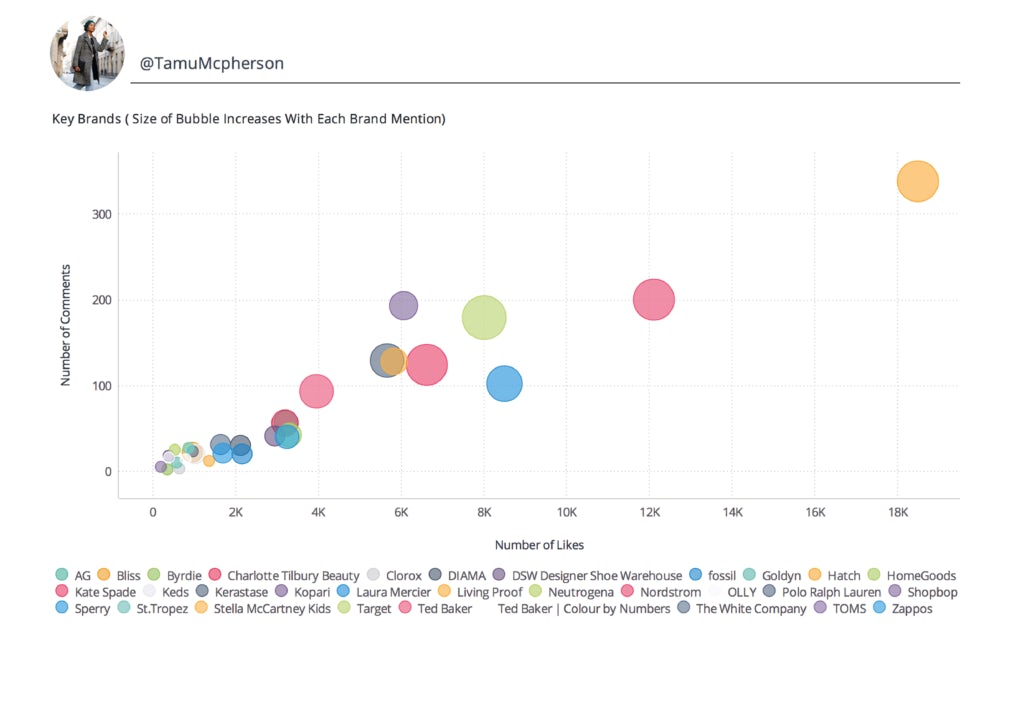 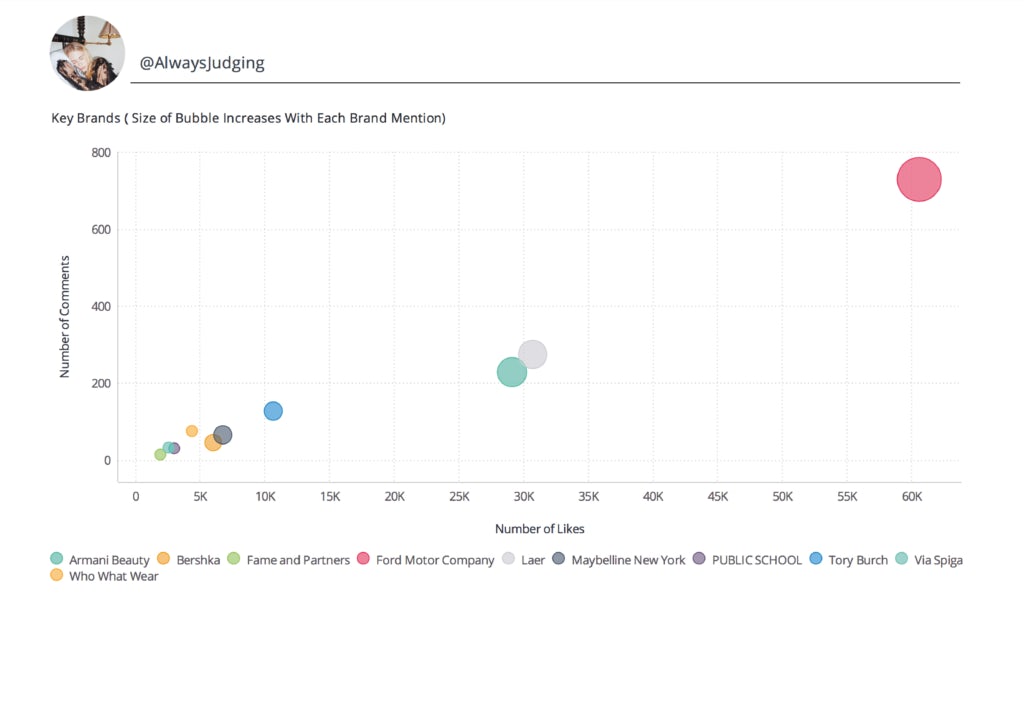 Why Influencers Are Critical to Tapping Chinese Millennials