This week, the fashion industry was once again caught up in the latest wave of rumours speculating on Anna Wintour’s departure from Vogue. But on Tuesday, in the company's latest effort to quash the chatter, Condé Nast chief executive Bob Sauerberg tweeted that Wintour “is integral to the future of our company's transformation and has agtreed to work with me indefinitely in her role as [Vogue] editor-in-chief and artistic director of Condé Nast.”

The company is clearly tiring of constant questions about Wintour’s status. But the real Condé Nast story of the week came on Wednesday, when The New York Times reported that Condé Nast plans to sell Brides, Golf Digest and W, and make other cuts to stem a reported $120 million in annual losses last year.

Whether Wintour stays or goes is a shiny object for media reporters to chase — and a potentially useful distraction while Condé Nast’s leadership navigates a long-awaited reckoning. Various nips and tucks haven’t solved fundamental problems like the decline in advertising revenue or a bifurcated management structure that allows US and international editions of the same magazines to operate as separate entities, making it harder to reform troubled titles and cut duplicated cost structures.

Still, this week’s dueling stories are worth considering together: what does Wintour’s “indefinite” editorial stewardship mean as Condé Nast enters a more-austere, digitally focused age? The company has been talking about restructuring for at least three years and this week’s news likely foreshadows more fundamental changes coming in the future.

In April — shortly after the Wintour retirement rumours first surfaced — BoF laid out a five point plan for the company’s long-term survival in a digital age that has not treated sprawling international magazine empires kindly. It’s time for an update on how the company is progressing:

Done and dusted, if the Times’ reporting bears out. With fewer titles to manage, Condé Nast can focus on titles that have the history, size and stature to find new audiences, including The New Yorker, Vogue, GQ and Vanity Fair. The question now is what other assets to shrink or shed. Or whether the whole company could eventually find itself on the block — in which case, Wintour’s continued involvement will be a key asset in driving up a potential sale price.

Condé Nast’s corporate structure is confusing, to say the least. What might once have been a quirk of a family-owned business is increasingly a liability. Condé Nast might be better served by bringing its international and US editions into one streamlined management structure. A magazine’s content must always reflect regional tastes. But to remain competitive in the international marketplace, publishers must be able to draw on the full strength of their corporate backers, whether it’s content, marketing clout or capital to pursue video and other expensive new media verticals. The drive for ever-larger scale is the impetus behind Disney’s recent acquisition of Fox and AT&T’s play for Time Warner. In a post-merger world, Condé Nast must assert itself as a global media player, rather than continue to operate as a group of loosely connected local franchises.

4. Nurture the next generation of editors

Wintour may be staying, but the editorial ranks immediately below her at American Vogue have undergone a shuffle. Fashion director Tonne Goodman and executive fashion director Phyllis Posnick are reducing their duties — at a rumoured savings of $1 million. All parties stressed continuity and Vogue veteran Virginia Smith will be stepping into Goodman’s title. However, Wintour has a once-in-a-generation chance to inject new blood into the magazine, just as the title is showing some momentum. At Vanity Fair, where Radhika Jones has begun a significant revamp with reduced budgets, it remains to be seen whether masthead changes will lead to increased audience and advertising revenue.

5. Digital is the future: invest more, but invest smart

Online ad sales surpassed print for the first time in the second quarter, and in an internal memo viewed by BoF, Condé Nast touted a 110 percent year-on-year increase in web revenue. Still, online has a long way to go to make up for the precipitous slide in magazine ad spends over the last decade. At first, Condé Nast was slow to embrace the internet, allowing rivals and digital upstarts to have first dibs on younger readers. However, during Wintour's five-year tenure as Condé Nast editorial director, the company has started to make up for lost time; the memo touts strong growth in new advertising partnerships that leverage reader data.

That said, Condé Nast’s makeover won’t end with the sale of Golf Digest, Brides and W. Until the next round of rumours, we at least have a bit of clarity as to what the future might look like: a streamlined global company, with Anna Wintour ensconced at the editorial helm. 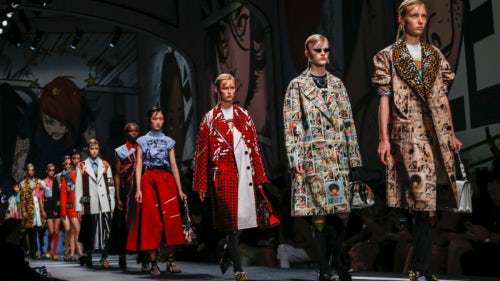 Burberry rebrands under chief creative officer Riccardo Tisci. A new logo and monogram were unveiled as part of the British brand’s new identity, marking the first time the house has changed its logo in almost 20 years. Developed in collaboration with the renowned British art director Peter Saville, the logo and monogram print will appear across all Burberry channels and in a new advertising campaign.

Europe revival lifts sales at Hugo Boss. Sales rose 6 percent in the second quarter as the German fashion house pursues a turnaround in its home market and updates some of its ranges to try to draw in younger shoppers. However, earnings before interest, taxation, depreciation and amortisation (EBITDA) and before special items slipped 1 percent from a year ago to €106 million (£94.06 million) in the three months, just below average analyst forecasts for €107 million. 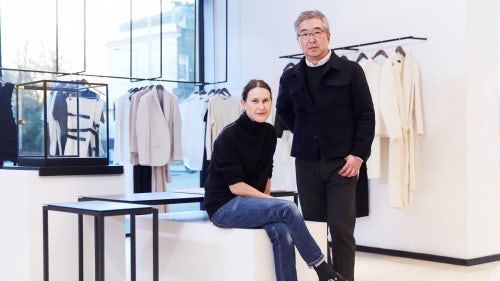 Joseph creative director departs. After nine years, Louise Trotter is leaving her post as creative director of Joseph. Pre-Fall 2019 will be her last collection for the brand. Prior to joining Joseph, Trotter had roles at UK high-street label Jigsaw, Tommy Hilfiger's H Hilfiger and Gap. A successor has not yet been named.

China to probe Pinduoduo over reports of counterfeit goods. Shanghai regulators are investigating the Chinese shopping platform following media reports of counterfeit goods and intellectual property infringements. The move comes after the e-commerce start-up raised $1.63 billion last week in the second-biggest US listing by a Chinese firm this year, which valued the company at $23.8 billion.

Flipkart unveils loyalty programme to counter Amazon Prime. The Indian online retailer will be launching its second loyalty programme 'Flipkart Plus' later this month, a move aimed at boosting customer retention. The company, which is in the process of being acquired by US retail giant Walmart, had attempted a loyalty plan in the past but without much success.