Comparable sales increased for a sixth consecutive quarter climbing more than double analysts’ predictions, and net sales are set to rise 2 to 4 percent this year.

Comparable sales increased for a sixth consecutive quarter, climbing 3 percent in the period that ended February 2, more than double analysts’ predictions. Net sales this year will rise 2 to 4 percent, the company said. The low end of that range equates to about $3.66 billion, compared with projections for $3.61 billion. 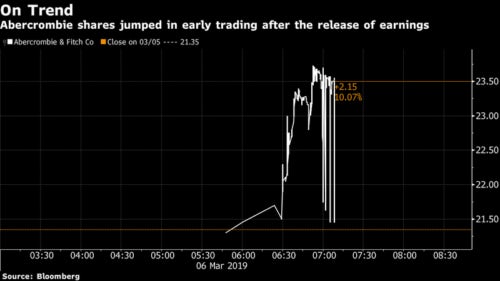 The company’s teen-focused Hollister chain continued to resonate with consumers during the holiday quarter, and showed strong comparable sales growth of 6 percent, more than twice what analysts estimated.

Still, the company continues to struggle to reinvigorate its namesake Abercrombie brand, which posted a 2 percent drop in comparable sales. The company said in January that weakness in women’s tops and dresses hurt the chain last quarter.

Investors are looking to Kristin Scott to bring her successes at Hollister to the Abercrombie brand. She was promoted in November to the new role of global brands president, where she’s been tasked to drive growth at both chains.

The shares jumped as much as 11 percent in premarket trading. The stock had already climbed 6.5 percent this year through Tuesday’s close.