PARIS, France — Acne Studios, the hip Stockholm-based label, best known for the skinny jeans that drove its early success, is radically reshaping its denim offering, replacing its entire range of existing denim products with new permanent styles and launching a new seasonal denim collection, all under the newly unveiled banner of Acne Studios Blå Konst, which means “blue art” in Swedish. Blå Konst is set to launch online and in all Acne Studios stores on April 6th.

The permanent collection will consist of only three styles for each gender — baggy, straight and skinny — in washes that have been reimagined and drastically narrowed in number, resulting in a more focused offering for consumers.

The denim itself has also been revamped — with less stretch and a more traditional denim feel — and details such as buttons and rivets have been designed afresh. Pricing remains unchanged, with a pair of jeans ranging from €190 to €330.

“You always have to trim your output, your bonsai. It has been important to grow that tree, but now we have roots and it feels easier to cut, to take a step backwards in order to go forward,” said creative director and co-founder Jonny Johansson, speaking exclusively to BoF after the brand’s Paris runway show.

Now we have roots and it feels easier to cut, to take a step backwards in order to go forward.

Johansson launched Acne Studios in 1997 with 100 pairs of raw denim jeans and the category was critical to the label’s rise, driving the vast majority of early revenue. But as the business grew, Johansson felt constrained. “Denim had become our identity,” he explained. “I think all of us wanted to create this modern fashion brand that we felt didn’t exist and all of a sudden we were the most traditional brand of all: jeans and t-shirts. In one way it was the best thing that could’ve happened; it became our foundation. But it was difficult when we got stuck there.”

The label’s denim business also came under pressure from both rising premium denim specialists like J Brand and Nudie, as well as fast fashion retailers like Uniqlo and Zara offering mass-produced denim at low prices. “There’s no question value denim has gotten better and put a lot of pressure on high-end denim,” says Marshal Cohen, chief industry analyst for retail at NPD. 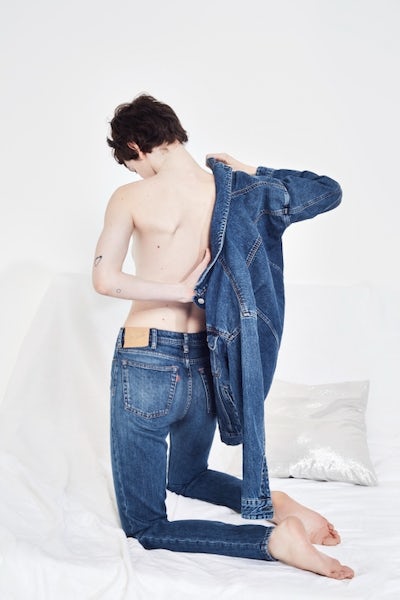 Acne has since repositioned itself as a “modern luxury brand” and stages increasingly high-profile ready-to-wear shows at Paris fashion week. As part of the pivot, it has diversified and upscaled its product offering, expanding into a wide range of categories, including knits and outerwear, which perform particularly well. Today, the label, which remains privately owned, has 50 retail stores in 13 countries. Turnover was just below €200 million ($215 million) in the company’s last fiscal year. But denim now makes up only about 15 percent of sales, a number Acne’s executive chairman and co-owner Mikael Schiller suggested should grow.

“It was time to take back control again,” said Schiller. “We started 20 years ago and a lot has happened with the other parts of the company. We wanted to start again and look at denim with fresh eyes,” added Mattias Magnusson, the company’s CEO. “If you look at the wider market, brands are launching lots of washes and styles that look more or less the same. You try to be everything for everyone. So we say that these are the styles and washes we think you need,” he said.

The wider premium denim market is saturated, growing by only one percent per year since 2011, according to Euromonitor. But there are signs the segment is picking up. “Denim is in a transition stage, now that the bleeding has ended and we are starting to see some growth,” says Cohen, who sees momentum coming from two places: style shifts away from super slim and super low-rise fits and the need for replenishment. “With denim having been soft on sales for the past few years, new jeans are needed as many don't fit or are worn out.”

But Schiller downplayed the importance of sales. “The Blå Konst project was born out of a desire to elevate and purify our denim offering rather than out of a business strategy,” he said. “Probably we should have a clear business goal for the range, but we do not really make financial plans in that detailed way. With this said, we have a budget for the Acne Studios Blå Konst store. But the store is quite small and the budget is not very aggressive.”

The standalone Blå Konst store will be located in Tokyo’s Shibuya district, while the revamped denim range is set to be more prominently displayed at stores across the label’s retail network.

“We started working on this project almost two years ago,” said Johansson. “We haven’t rushed anything, but we have felt we can make this change because we have credibility when it comes to denim.”