BERLIN, Germany — You'd be forgiven for not knowing much about Acronym. The company never advertises and with no public relations strategy to speak of, its founders are tough to reach. They prefer to let their designs speak for themselves and whether you know it or not, they've been pacing the vanguard of technically-focused fashion for nearly two decades.

Founded in 1994 by Errolson Hugh and Michaela Sachenbacher, Acronym is an incredibly lean and agile operation. The founders are as likely to refer to themselves as a guerrilla unit as a clothing company, but since 2002, they've produced their own apparel label. It's sleek and futuristic, tough, functional and undeniably cool. It's so brim-full of performance features that they offer a glossary to help customers interpret them. And though the technical nature of the garments is a selling point in certain markets, you needn't know the difference between Gore-Tex and Super Composite Skin to appreciate how well they function.

Acronym began as a design agency offering contract services to larger firms. Their first job was with a German snowboarding company called Protective, which they quickly parlayed into a role with Burton Snowboards. Their relationship with Burton was a resounding mutual success that lasted nearly 14 years. Hugh spoke fondly of the partnership: "Burton was great because they were so irreverent. Snowboarding's inherently technical. You need the protection, you need the performance for the activity, but it's got such a punk rock spirit to it. There was never an idea that was too crazy."

Theres no marketing budget that youre paying for. Its all going into the gear.

Working heavily with sportswear and military technology, Hugh and Sachenbacher developed an interest in applying them to everyday attire. For Hugh, the impulse to marry technical performance to formal elegance is deeply rooted. "I started karate when I was 10, and I was given the traditional karate uniform, the gi, which is a very Japanese form of pattern-making. Right after that I realised, 'Wow, I can do things in this suit I can't do in my regular clothes.' That's always informed Acronym."

Hugh and Sachenbacher pitched this notion of form-meets-hyperfunction to several of their partners. None were interested in pursuing it. According to Hugh, they were puzzled by the concept: "They all said, 'Why would you want to do that? It's so difficult, it's so expensive. We don't get it.' So, out of frustration, we decided to do it ourselves."

Acronym's first collection, dubbed Kit-1, was released in 2002, in an edition of 120. Nearly three years in the making ("It almost killed us," says Hugh), it consisted of a jacket, a bag, a soundtrack, software, catalogues featuring concept art, and few other small items. Not exactly a typical first offering. The response was strong, and the concept resonated with industry fixtures. Their first full collection, released in Fall 2003, was carried by tastemakers like Colette in Paris.

With zero marketing besides word-of-mouth and a handful of magazine features, the best explanation for Acronym's immediate success was the work itself. "Because we came from a design background, our entire business model, such as it was, was purely product-based. The whole structure of the company was set up to build exactly what we wanted with no compromises." 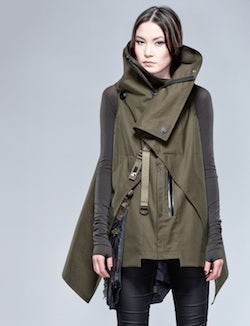 Acronym has never strayed from this single-minded focus on product design, and it's the key to unpacking their success. "There's no marketing budget that you're paying for when you buy one of our jackets," says Hugh. "It's all going into the gear. I think people can sense that, and you can see it in the end product." Stated simply: to sell a hard-shell jacket for over $1,000, you just have to make a hard-shell jacket that's worth over $1,000.

This is all to say that Acronym's customers — enthusiasts might be a more apt descriptor — have understood its vision from jump. Despite daunting price-points, Hugh never worries about leaving product on the shelves. "What people really want out of Acronym is how uncompromised it is."

Over the past decade, Acronym has cultivated a relationship of trust with its audience, which has allowed them to achieve things most labels wouldn't dare attempt. "If we had to run the stuff by our sales team or our commercial department, I can imagine it would be very difficult to make it happen. One season we reduced our apparel offerings from the normal 20 to four, which was risky, but it was one of our most successful seasons."

That renegade spirit is what makes Acronym such a unique brand. Whether they intended to or not, they've built a positive feedback loop where operational innovation facilitates design innovation. "When you have the product in front of you, it's hard to imagine it's made by the size of company it's made by. But we can do that because we strip everything else away." When Hugh says "everything else," he means it: until 2009, he and Sachenbacher were the company's only employees. The team has since grown, but remains puny by wider industry standards. By staying so lean, Acronym is able to offer several avant-garde pieces per season. Their runs are small, their market is devoted and their reputation for quality is unimpeachable. No matter how far out one of their pieces seems, consumers know it will function as intended and then some.

Acronym's product-first philosophy has generated some unique business practices, too. In 2005, they introduced Subnet Mask, an invitation-only website that is the locus of their wholesale business. "Subnet Mask is our dealer website. It's the tool we made up to address the fact that we didn't have the time or the money to travel to sell the collection." To access Subnet Mask, you need a password granted "by recommendation" from Acronym. Once inside, you can view photos and videos of the new collection. Orders are placed on the website, and cancelled if deposits aren't made promptly. Simple. "That's how we avoided having to deal with all of the traffic control of managing accounts," says Hugh. "We just don't have the time."

Though the brand was viewed as something of a curiosity at first, the industry has caught on quickly. "When we started, the technology we were using was a new thing for fashion," says Hugh. "Our focus was always on quality. For us, the technology is quality. It's not an end in itself. That notion of technology being quality has become much more understood in the industry." As a result, Acronym fields an endless stream of requests from brands seeking to access their expertise, which allows them to be picky when choosing collaborators. Currently, they design Stone Island Shadow Project, Herno Laminar, and Disaeran for Japanese retailer United Arrows. These co-productions are essential to Acronym's continued growth. Hugh considers them invaluable learning experiences: "We're constantly getting to see the insides of companies we normally wouldn't get to see. All of them do something really well. All of them also face different challenges, so you can learn at a really fast rate."

A higher profile has its downsides, too. Last June, Gucci showed a jacket as part of its Men's Spring 2014 collection that bears an uncanny resemblance to Acronym's GT-J5A jacket, introduced in 2006. While that sort of line-for-line copying is typical in the world of fast fashion, it's surprising for a house as venerable as Gucci, and, in Hugh's view, indicative of an industry in distress.

"I just laugh at the Gucci thing because it doesn't really hurt us. But it isn't actually that funny. And with those resources they shouldn't have to do that. I'm almost sure that somebody had it as a sample, and there was a deadline crunch, and they needed that slot to be filled, and they sent it to the factory and knocked it off. Probably no one person is even responsible for it, but the whole system is under such pressure, even at that scale. They're under extraordinary pressure to keep up the pace. In my view, this is a broken system, in many ways."

Hugh takes solace in the fact that even though another label might produce garments that look like Acronym, they're unlikely to function like Acronym. Recently, much of the label's focus has been on pushing the envelope in pattern making. "At the beginning it was definitely the materials, and now we're more into the way things fit and how they work on the body, as far as kinesiology, and how they move," Hugh explains. "Lotta [Saas, a member of the design team] spends pretty much all her time working for us trying to figure out how to make things do what they aren't supposed to in terms of the pattern. It looks like a regular pair of pants but allows you to move as if you're wearing a track pant for competition."

When asked what he thought the future of apparel holds, Hugh replied with a quotation from speculative fiction godhead William Gibson: "'Interface evolves towards transparency.' What I get out of that is that the gimmicks disappear. All of the bells and whistles go. When we're designing something for Acronym, we're designing the result, not the product itself. The thing that it allows you to do, that's the focus."

"In karate, you're taught to punch through the target. We're trying to design through the product. The product is there, it's the vehicle, but it's not actually what we're about."