The sponsorship stakes are high, with Nike and Adidas jointly selling almost $5 billion worth of soccer gear last year.

HERZOGENAURACH, Germany — Adidas AG has the early lead in the shirt-sponsorship battle that will accompany the World Cup in Russia next year.

With qualification for the 32-team quadrennial soccer tournament complete, the German company has secured at least 11 jersey sponsorships, one more than Nike Inc. of Beaverton, Oregon.

While the world’s biggest sporting-goods maker had a last-minute addition to its roster after Australia beat Honduras on Wednesday to clinch the next-to-last spot, several prominent Nike-sponsored teams — including Chile, the Netherlands and the U.S. — failed to qualify. New Zealand, another Nike team, Wednesday blew its chance to upset Peru, which took the final spot. 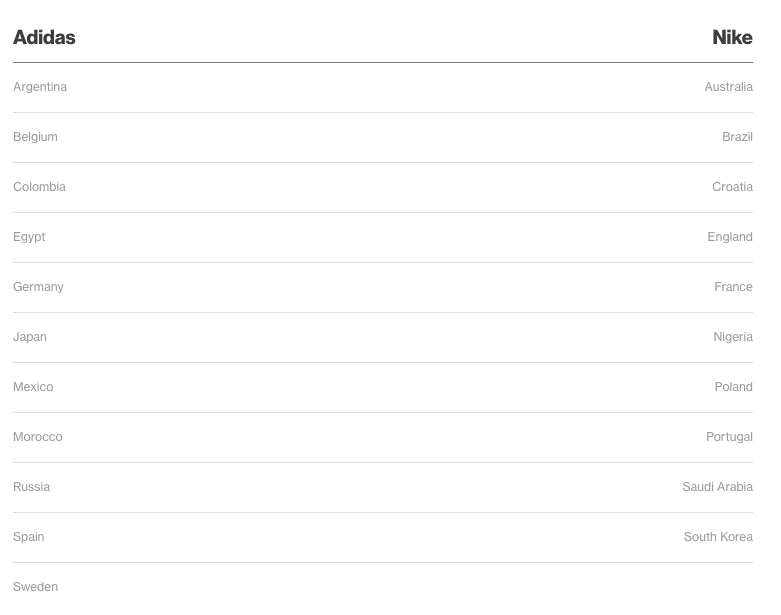 The sponsorship stakes are high, with Nike and Adidas jointly selling almost $5 billion worth of soccer gear last year. While 2017 may be a lighter year with no World Cup or European championship, retailers are starting to stock up on jerseys for next year’s global tournament now that the qualification campaign has ended.

While Adidas has at least one more team than at the 2014 World Cup in Brazil and Nike has two fewer, the biggest change in sponsorship has hit smaller competitor Puma SE. Adidas’s crosstown rival in Herzogenaurach, Germany, had eight nations in the race in Brazil, but four-time world champion Italy’s failure to win a spot means only Switzerland and Uruguay will represent the leaping-cat logo at the 2018 event.

Nike, Adidas and Puma confirmed their sponsorships to Bloomberg News. While soccer federation FIFA shows Iranian players in Adidas shirts on its website, the company said Thursday it doesn’t have a World Cup deal with the nation’s team.

New Balance Athletics Inc. and Iconix Brand Group Inc.’s Umbro each sponsor two teams participating, while Errea Sport SpA, Hummel International Sport & Leisure A/S, Uhlsport GmbH and Romai Sports have one each, according to company websites and media reports. Not all have confirmed that their deals extend through the tournament.

Adidas in Brazil secured a double win, as both finalists played in its uniforms. Mirroring recent sales successes and market-share wins, the company has also had a run of luck in soccer this year. In four of Europe’s five largest leagues, Adidas-outfitted teams won the national titles this year, and Adidas also saw teams in its jerseys lift the trophies in the two pan-European competitions, the Champions League and the Europa League.

Nike still has a potent roster for Russia, including Brazil — the only team to win the tournament five times — and Portugal, ranked third in the world. The team around superstar Cristiano Ronaldo last year won the European championship, ending Adidas’s winning streak in that competition that lasted from 1996 to 2012, according to Nielsen Sports.