BOSTON, United States — The return of the colourful, flashy and even downright ugly trends of the 1990s couldn’t have come at a better time for Reebok.

During the late 1980s and early 1990s, the American footwear brand was a cultural and commercial force: Jane Fonda wore Freestyles in her aerobics tapes, tennis player Michael Chang won the French Open in Pumps, Allen Iverson made his NBA debut in the Question and Dee Brown won the 1991 NBA Slam Dunk Contest wearing Omni Lites.

But Reebok stumbled as it expanded into new performance categories and apparel. By the end of the decade, Nike was the undisputed US market leader. Adidas acquired Reebok in 2005, hoping to use the brand, which at the time still had lucrative licensing contracts with the NFL and NBA, to boost its presence in America.

Sales nosedived, from $3.8 billion that year to $1.8 billion in 2013. The major league contracts expired in 2010. Crossfit and Ultimate Fighting Championship are its highest-profile sports partnerships today. Adidas wrote off €265 million ($300 million) related to the acquisition in 2013. By 2016, when Adidas appointed a new chief executive, Kasper Rorsted, analysts speculated selling Reebok would be one of his first moves.

Instead, Adidas kicked off a four-year turnaround plan, aiming to make Reebok profitable again by 2020. Sales inched up 4 percent to $2.1 billion last year.

The company closed over 100 stores and cut staff. Reebok headquarters moved to Boston from a nearby suburb, where it now attracts more tech talent, part of a company-wide makeover aimed at infusing a startup mentality into the 60-year-old brand.

The brand plans to bring more style to its performance division and is mining its archive to find marketable styles. Women are a priority, so that means designing product specifically for her with a sense of style, extending size runs and enlisting celebrities and designers who put their own spin on Reebok.

Reebok is re-introducing itself — and its sneaker archive — to a younger, digitally savvy consumer who wears the same clothes to workout and to run errands. But a question remains: What does Reebok stand for today? The renewed focus on fitness and women hasn’t saturated the market yet — sales declined 10 percent in the most recent quarter — though margins are improving fast. The brand hasn’t proven it can compete with athleisure-driven sportswear brands, particularly in its home market. In some ways, the company still has one foot in the past, differentiating its performance and lifestyle products even as many consumers no longer make a distinction between the two.

“We’ve got to tell fewer stories, bigger,” said Matt O’Toole, Reebok's brand president. “Different consumers have different historical references for the brand that we've got to overcome and clarify.”

The time is ripe for a comeback. Vans, Champion and Fila are among the sportswear brands that have successfully reinvented themselves after years, even decades, out in the cold, by leaning into customers’ nostalgia for the 1990s and thinking more like fashion brands than athletic ones.

“The consumer is looking for alternate brands, they don’t want to wear the same stuff everybody else is,” said Matt Powell, an analyst with NPD Group, adding that smaller brands are growing quickly now. “Retro and small is the new big.”

Reebok is leaning in this direction as well. In addition to athletes like Conor McGregor, Reebok is expanding partnerships with model Gigi Hadid and designers like Victoria Beckham and Kerby Jean-Raymond of Pyer Moss. It recently announcing Cardi B as an ambassador, following the end of a deal with Ariana Grande.

Jean-Raymond's initial partnership with Reebok was meant to be only an endorsement deal for the DMX shoe, but he pushed to create a full, high-fashion collection that he has since shown on the runway and the brand supported him, he said. "I went with the underdog and the underdog has really been supporting me and helping me grow," he said, adding that he is drawn to the "culture of this confidence and arrogance that [Reebok] has had since the 80s and 90s." The partnership, which he said has tripled sales expectations, is making space at Reebok for more fashion partnerships in the future. 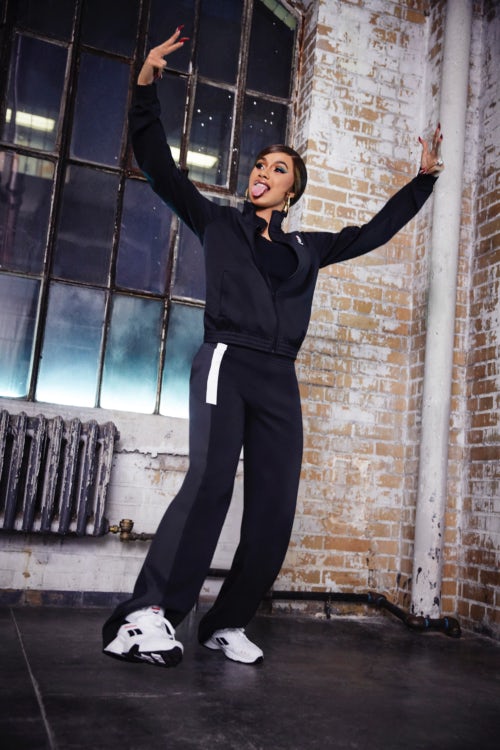 Cardi B for Reebok | Source: Courtesy

Reebok’s reset hinges on women, who make up 42 percent of the brand’s customers, which O’Toole said is higher than the ratio at Nike and Adidas. He added that he wants to raise Reebok’s share to 50 percent by making better products for women in a wide range of sizes, more than simply adapting men’s sportswear designs. That also means creating athletic apparel that women will wear outside the gym, O’Toole said.

Nike is aggressively courting women as well, fronted by professional athletes like Serena Williams, by opening dedicated stores. Adidas is going after the same market, emphasising sports rather than fitness, leaving that to Reebok.

Reebok has brought more women into its leadership ranks in recent months, including vice president of marketing Melanie Boulden, vice president of creative direction Karen Reuther and vice president of global operations Erika Swan. Overall, half of the management team (now about 50 percent female) has changed over the last two years, a churn O’Toole described as part of a shock to the system, along with the move to Boston.

“I like to say like [we were] breathing our own exhaust, you know, after a while it's not very healthy,” said O’Toole. The changes have resulted in some “discomfort,” but “we're getting to a place where the energy is really in the right place.”

Reuther, who spent more than a decade at Nike, is one of the forces charged with pushing Reebok’s product to have a clear identity, which she describes as “bold, revealing and transparent.” She contrasted this with the more minimalist and serious looks of competitors.

Reebok’s glory days are a part of the new image. Reebok released the first athletic shoe designed for women, the Freestyle, and embraced the aerobics movement in the 1980s.

“We were the first brand to say it was okay for women to sweat and have muscles,” she said.

One of the first changes she made when she joined Reebok this summer was to bring back the brand’s side stripe and cross check design element, something she said should tie all the footwear together.

“We walked away from it too much,” she said. “For a brand to have a recognisable design element is enviable.” 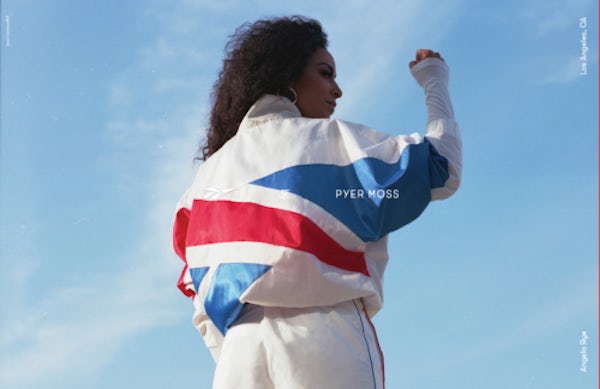 The company doesn’t want to lean too far into athleisure, but still needs to cater to that customer. It’s a challenging balance to strike while also trying to reassert a brand identity.

“If we ever let off the gas on [creating product designed for fitness and sports wear], then I think we're at risk of just becoming a fashion label,” said O’Toole.

The PureMove bra exemplifies Reebok’s new approach: innovation, inclusivity and an empowering marketing message. The sports bra was developed in partnership with scientists at the University of Delaware over three years, and uses fabric treated with "Sheer Thickening" fluid that adapts and supports the body. The bra, available in ten sizes, launched with an empowerment-themed campaign starring Gal Gadot and Hadid.

The company is now evaluating how to apply the bra’s motion technology to other products and is offering extended size options in other categories throughout 2019, as well as options for maternity wear.

Innovative product is one priority for Reebok; reaching customers is another. This task is especially challenging in the US, Reebok’s weakest market, where the brand has shut down more than 100 stores since the end of 2016. Those were mainly outlet stores, which were hurting the brand’s image, said Guy, the analyst.

Sales continue to slide in North America — down 15 percent in fiscal 2017 — and Reebok needs the US market to pick up in order to return to profitability. The decline mainly reflects store closures and fewer wholesale partnerships, Guy said.

Reebok is wooing retailers like Footlocker, Kohl’s and Nordstrom, which it hopes will give the brand more floor space.

“[Retailers] are looking for brands to diversify and I plan to be one of them,” said Chris Froio, Reebok’s senior vice president and general manager of Reebok North America.

Reebok is merchandising its showrooms differently, presenting curated selections of product across its two categories (performance and classic) with each retailer’s ideal customer in mind — and with possibilities for exclusive colourways and styles, said Froio.

With Footlocker, for example, the brand has expanded from a presence in 30 stores a year ago to all stores today. Reebok developed an exclusive line for the retailer in 2018 called “Alter the Icons,” a range of classics footwear with designs tweaked by up-and-coming musicians Lil Baby, JayIDK and Saweetie.

Froio explained that while other sneaker brands are driving a frenzy in demand for product by only producing 1,200 or 1,500 of a certain style, Reebok wants to balance that “hype” without sacrificing scale.

Froio said the brand cannot fall in the trap of increasing sales through “commodity items that every brand can make” at low prices. “You've got to nurture [footwear] franchises...or you'll be boom and bust. I’m trying to give people the scale that they want, but also make sure that we're talking about it in three years.”

Once Reebok finds more growth with its retail partners, it can start to think about opening new stores, said Froio. “We have to earn the trust of the wholesalers before we try to become one ourselves,” he said, adding that e-commerce is his other top priority.

On Amazon, which Froio describes as a successful sales channel, Reebok has tried to reduce third-party sellers of its product by both tightening its overall wholesale network and also beefing up its own presence on the marketplace. The brand sells a mix of exclusive and core products there, including the Pure Move bra.

O’Toole wants half of Reebok’s sales to be conducted online, through Reebok.com and retailers’ websites, by 2020. While he rates the site a “C-plus” in performance and appearance, the company is planning to launch a fully redesigned web platform in 2019 as well as a membership program.

As far as online buzz to back it up, 2019 is already setting a strong trend for Reebok. In the first three quarters of the year, Reebok's earned media value grew by 31 percent, faster than Nike, Adidas and Lululemon, according to Tribe Dynamics. Online engagement around campaign debuts from both Conor McGregor and Cardi B boosted online conversation around the brand by 183 percent, a higher growth rate than its competitors, though still smaller in volume, according to analytics firm Brandwatch.

McGregor's tweet had the highest engagement. "My shoes will always be better than yours!" he wrote.