Comme des Garçons has quietly grown a global multi-brand fashion business that now generates $220 million in revenue per year. BoF talks to Adrian Joffe — president of Comme des Garçons International and retail guru behind Dover Street Market — about tending the precious root of creativity from which the company's unconventional collections and business strategies both derive.

Comme des Garçons has quietly grown a global multi-brand fashion business that now generates $220 million in revenue per year. BoF talks to Adrian Joffe — president of Comme des Garçons International and retail guru behind Dover Street Market — about tending the precious root of creativity from which the company's unconventional collections and business strategies both derive.

LONDON, United Kingdom — For Adrian Joffe, president of Comme des Garçons International and retail guru behind Dover Street Market — a shopping mecca in London’s Mayfair that’s part brand flagship, part luxury bazaar — building a fashion business is more like tending a garden than tuning an engine. “Rei Kawakubo created the company on the basic value of creation and everything else branches from that one root she planted. Creation stagnates without change. So you have to constantly grow and change, that is our goal. It’s natural, yet it’s also controlled.”

When we meet at the Rose Bakery on the top floor of Dover Street Market, Joffe is visibly excited for the store’s bi-annual tachiagari (“beginning” in Japanese). After three days of closure and re-construction, the six-storey building has just been reborn with a slew of tantalising new collections, installations and spaces created by designers including Jil Sander, Chitose Abe of Sacai, Delfina Delettrez and Kei Ninomiya (Rei Kawakubo’s newest protégé, whose line Noir Kei Ninomiya launched last Spring in Japan and has just arrived in Europe). The entrance to the store now showcases past issues of Comme des Garçons Six, the cult magazine published from 1988 to 1991. “It’s mad. Crazy stuff,” exclaims Joffe, with real thrill in his eyes. But closing the store to make radical changes every season is only one of the ways in which Dover Street Market has rewritten the conventional rules of luxury retail. 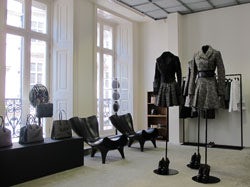 While most luxury fashion companies have been pouring money into temple- like flagship stores, specifically designed to deliver an unadulterated, monobrand experience, Dover Street Market — inspired by the now defunct Kensington Market, a three-storey indoor market that over the years, catered to various sub-cultural waves of hippies, punks, new romantics, metal-heads, ravers and goths — offers an unusual blend of products by both Comme des Garçons and a wide range of other brands, from Azzedine Alaïa and Céline by Phoebe Philo to Tokyo streetwear label Sunsea. What’s more, the store is housed in a former office space, split across six storeys connected only by a small elevator and a concrete stairwell, making it challenging to navigate. Menswear and womenswear collections are interspersed, confusing many newcomers. And while brands like Acne and APC have since followed Dover Street Market to this quiet stretch of Mayfair, the store is situated in what remains a low-traffic area, away from traditional luxury shopping areas like Bond Street.

But these seemingly off-kilter decisions flow directly from that initial root which Rei Kawakubo planted at the genesis of Comme des Garçons, in 1973. “It all comes from the same source: the desire to create something different. Our kachikan, or sense of values, goes into everything the company does. Not just clothes but everything. It has to be new. It has to be creative,” says Joffe.

“Every shop we do is new, every interior different to the last one; communication through direct mailings is based on one-year collaborations with artists. Our retail strategies, such as Dover Street Market or the Guerrilla Stores, are completely new,” he continues, referring to the unconventional, temporary stores selling products from previous seasons which Comme des Garçons opened and subsequently closed in cities like Reykjavik, Warsaw, Barcelona, Singapore, Stockholm, Athens, Beirut and Los Angeles.

“Berlin was the first Guerilla Store. I had all this stock, dead stock, things like perfume bottles, it was always in our warehouse... We made rules like proper guerillas in the jungle, always moving. And we had a maximum limit on what people could spend in the store: $2,000,” he recalls. At another brand, this kind of excess inventory from past seasons might have ended up at a conventional outlet store. Joffe managed to turn it into a novel and compelling retail experience.

Indeed, under Kawakubo and Joffe’s guidance, Comme des Garçons’ kachikan of creation goes hand-in-hand with a sense of pragmatism and business savvy.

During the recession of 2008, when many fashion companies were desperately slashing prices, Comme des Garçons took a different approach, launching Black, a line reprising best-selling styles from the brand’s archive at reduced price points.

Earlier this year, Comme des Garçons announced that the New York outpost of Dover Street Market would be housed, well off the beaten luxury track, in a seven storey neoclassical building at the corner of 30th Street and Lexington Avenue, an area best known for its curry houses and the South Asian taxi drivers they attract. “Of course, we can’t afford Fifth Avenue or Madison Avenue,” says Joffe. “It’s pragmatism and it’s new. It’s exactly that mix.” 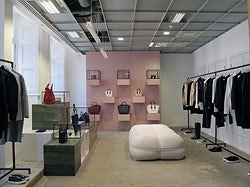 Mixing pure creativity with business savvy isn’t always easy to do, however. “Very hard, very hard, very hard,” says Joffe. “That’s the dilemma [Rei Kawakubo] has and I have as well. The ways to make money and grow internationally depend a lot on her. I can’t do anything on my own... I can’t just go and make shops and build franchises. We’re very much [working] in sync. At Dover Street Market, everything visual is her, but because it’s growing and she’s got limited time, she leaves me more and more things: what we buy, how we do the business. But it has to be within the kachikan.”

Difficult as it may be, the approach is clearly working. Comme des Garçons currently generates about $220 million a year in revenues, according to numbers provided by the company, and has attracted a cult-like global following. “Our core business is with diehard fans. We produce at least 95 percent of what is shown on the runway,” says Joffe.

Even the brand’s fragrances can be highly conceptual and come with bold manifestos. In 1998, the brand, famously, released it’s first “anti-perfume,” Odeur 53, a blend of notes including “oxygen, flash of metal, nail polish and burnt rubber.” The company entered into what Joffe calls a “partial licensing” agreement with Barcelona-based Puig in 2002. “We do the perfumes, we do the boxes and Rei does all the graphics, and they produce it and sell it only to fragrance stores.” But he found a clever way to keep doing the brand’s more conceptual scents, thereby sustaining the kachikan, even in fragrance. “We divided the logo. We gave [Puig] Comme des Garçons Parfums, but we made a new label, Comme des Garçons Parfums Parfums, for all the weird things. No one knows this, but you will see Parfums Parfums [on some bottles] and on the other ones, you’ll see Parfums. It’s kind of a revolutionary license really.”

Play, a range of basics, including t-shirts, sweatshirts, knitwear and canvas footwear, is one of the company’s most lucrative lines, bringing in 12 percent of overall revenue. “Play was totally a business decision. We didn’t know it was going to be so amazing,” says Joffe. But with its quirky, bug-eyed heart logo, developed in collaboration with New York graphic artist Filip Pagowski, even Play manages to embody the creative spirit of Comme des Garçons.

Indeed, Comme des Garçons’ brand architecture is less like architecture and more like an ecosystem, where a dense forest of brand extensions and product lines can grow freely and directly off the main Comme des Garçons root, without defined hierarchies. “We keep things on a parallel level,” says Joffe. “We can’t grow deeply, we’re not big enough or rich enough to open flagship stores around the world like multi-national corporations, so we have to grow the company laterally. That’s why we’ve got 17 brands,” he continues. “We’ve just got to continue, organically and naturally. Slowly, slowly, little growth. We don’t want to double overnight. We’ve never had investors or anything like that.”

But how much can this ecosystem grow before the connection to the original root planted by Kawakubo is weakened?

“There’s the danger of dissipation,” says Joffe. “How big can you get? Already Rei is worried... Because how do you keep that strength when you are growing? It’s a big dilemma. And there’s also the effect of her having to, one day, slow down a bit... Even Rei is not immortal.”

The company now employs over 800 people. “Most people stay forever; it’s like a family because of the strength of the belief system,” says Joffe. But, in particular, designers Junya Watanabe, Tao Kurihara, Fumito Ganryu and Kei Ninomiya have been instrumental in extending the company’s brand ecosystem (Tao closed in 2011, but Kurihara continues to design the Tricot Comme des Garçons label.)

In the future, might one or more of them tend Kawakubo’s original root?

“It depends on who you get to take over. I think it’s got amazing potential. Comme des Garçons is organic. But I think, without doubt, it’s going to change. Because once she’s not there, for sure, it’s going to be different.”