From the racks of Tokyo retailers to the showrooms of Pitti Uomo, African menswear brands are enjoying both critical and commercial acclaim.

From the racks of Tokyo retailers to the showrooms of Pitti Uomo, African menswear brands are enjoying both critical and commercial acclaim.

LAGOS, Nigeria — “The local backlash was insane at first,” says Adebayo Oke-Lawal, the creative director behind Nigerian menswear label Orange Culture. “[But] I honestly think being received positively internationally helped change the view of the brand [back on the African continent].”

Three years ago, Oke-Lawal was showered with attention after he was named a semifinalist for the first ever LVMH Prize. The avant-garde designer says he chooses to create clothes for “the new age man, one who thinks differently, feels differently and allows himself to be vulnerable.” The result is a brand that he admits was initially not well received, as he chose to challenge conventional aesthetics and notions of masculinity.

But thanks to the spotlight of LVMH and the global network of influential industry leaders like Omoyemi Akerele, he can now afford to be ironic. So much so that he called the latest Orange Culture collection ‘The School of Rejects’ when he showed at Lagos Fashion and Design Week in October. Next season, Oke-Lawal says, there will be a show during London Fashion Week Men’s in June.

African menswear designers like Oke-Lawal are increasingly visible on the global fashion calendar and in demand from international retailers. Take South African designer Laduma Ngxokolo, whose brand MaXhosa by Laduma was exhibited for a third time at this month’s Pitti Immagine Uomo in Florence, or the Côte d’Ivoire-raised Alexis Temomanin, whose label Dent De Man is sold as far afield as Barneys New York, American Rag in Tokyo and Joyce in Hong Kong. For its part, Orange Culture is available in Church Boutique in Los Angeles and Utter Couture in London.

Beyond the foreign gaze

African menswear can no longer be considered an exotic afterthought or as somewhat separate from the international scene. How African designers are understood beyond the continent is often synonymous with the vivid visual motifs and hyper-stylization of a few African menswear references. The style movement behind the Congo’s flamboyant Les Sapeurs, working class men who spend the majority of their salaries on clothing, coupled with the arresting portraiture of Malian photographers like Seydou Keita and Malick Sidibé have cemented this idea still further in the foreign gaze.

However, Africa’s diverse aesthetics as well as their sources and influences are far more nuanced. The way in which African men navigate masculinity and express it through clothes is surprisingly fluid, adding to its appeal in a global fashion industry that continues to reflect a post-gender agenda. Pastel suiting, bold use of print and a vivid palette for knitwear have all become hallmarks of Laurence Chauvin Buthaud’s menswear brand Laurence Airline.

The way in which African men navigate masculinity and express it through clothes is surprisingly fluid.

Produced in her native Côte d’Ivoire, Buthaud is quick to highlight the brand’s European influences, given the emphasis she places on having footholds in both Paris and Abidjan. Culture clash is explored further by Dent De Man, who since an explosive 2015 showing at Pitti Immagine Uomo, has continued to hone its offering of suiting in heritage Indonesian wax prints informed by founder Alexis Temomanin’s Ivorian ancestry and his East London location.

A similar cross-pollination in ideation and execution is seen in Okun, a haute beachwear brand that is giving market leader Vilebrequin a valiant run for its money – at least in the design stakes. Nigerian-born, British-based creative director Bola Marquis was keen  from the outset to create an international luxury beachwear brand with an overt African aesthetic. The fact that his stockists now range from Brown’s in London to United Arrows in Tokyo supports his cause.

Similarly, Chi Atanga, a Cameroonian-British entrepreneur behind loungewear brand Walls of Benin, is hoping to conquer a niche menswear category through a nod to African design. Meanwhile, creative polymaths like the Kenya-based stylist Sunny Dolat offer a persuasive and powerful lens onto menswear from an East African perspective.

Pivot from South to West Africa

For decades the dominant force in Sub-Saharan Africa was the South African fashion industry. Boasting the most mature retail market, it also hosted a vibrant range of menswear and mixed gender players during the country’s fashion weeks. David Tlale, MaXhosa by Laduma Ngxokolo and Stiaan Louw are just three who have made an impact beyond their national borders. But whilst fashion weeks in Johannesburg and Cape Town have long been the location to scout for Africa’s brightest and best menswear designers, recent years have seen something of a pivot toward West Africa – especially in terms of global influence. 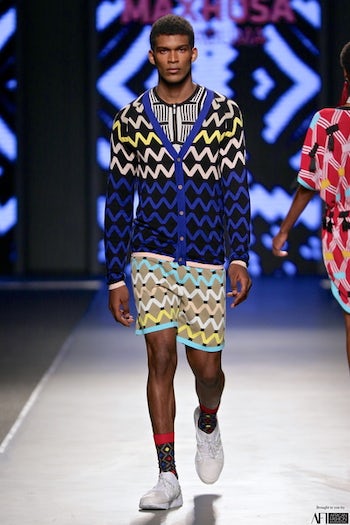 From 2014 until 2016, when the commodities market brought oil prices tumbling, Nigeria was the largest economy in Africa. As well as being a cultural hegemon, it is home to some of the wealthiest billionaires on the continent. Speaking to menswear designers based in Lagos, the country’s commercial capital, one is struck by their collective mission to serve such a vast city with a melting pot of influences and distinct aesthetics, rooted in a deep tradition of tailoring and codified dress for different occasions.

Sleek and aspirational affluence is reflected in the work of tailor Mai Atafo, the de facto wedding attire choice for wealthy city dwellers and a red carpet perennial for male celebrities. Another Nigerian who chooses to posit his menswear practice as part of a larger personal design portfolio is Kelechi Odu. Embracing architecture, furniture design and fine art, his conceptual approach “seeks to interrogate and contribute to the discourse of what a man is,” he says. His collections are often informed by geopolitics, popular cultural icons and heritage.

The commercial success of menswear designers on the African continent is especially commendable given the production challenges they face. Oke-Lawal cities several infrastructure issues and Odu notes that both his mainline collection and footwear line have been hampered by his decision to produce exclusively in Nigeria. If designers across the continent are to truly take advantage of the global interest and demand for their products, a tripartite approach is needed, involving industry bodies, diversified capital inflows and critically, government buy-in, still essential in emerging markets around Africa.

The leadership of local industry

To this end, the pioneering efforts of Omoyemi Akerele, founder of Lagos Fashion and Design Week is significant. Over the past seven years, Akerele has lobbied for the local and wider African fashion industries both at home and abroad. She has taken advantage of her global network and convening power to seek solutions to the particular challenges faced by African brands and provided a considerable platform for menswear designers from the continent.

“Menswear collections keep getting stronger season in, season out. And with the extension of the LFDW platform beyond Nigerian designers to a pan-African platform, there's an increasing need to create programmes solely dedicated to promoting menswear via the platform,” she says, pointing to the need to better “connect the dots”, ensuring designers, retailers, financiers and representatives of legislation bodies work in concert to create an ecosystem that is conducive to supporting the industry long term.

The menswear renaissance in Africa would be nothing without its local retail champions. Three Nigerian retailers at the vanguard are Temple Muse, Alara and Stranger. As the oldest of the three, Temple Muse, founded by former Selfridges buyer Avi Wadhwani and his brother Kabir Wadhwani, has enjoyed many retailing firsts: acting as a launch pad for African-grown talent such as Tzar Studio and Kelechi Odu and more recently the highly-anticipated collaboration between Ugo Mozie and Bailey Hats. They were also first to showcase Balmain and Lanvin menswear.

After Alara opened its doors, founder Reni Folawiyo stocked Laurence Airline and Orange Culture alongside Dries Van Noten and Margiela in a bid to put African menswear designers on par with their international counterparts. Speaking to Yegwa Ukpo, of the boutique Stranger, illustrates the pivotal role that retailers have in growing the market: “Our early days were spent educating customers about Japanese fashion brands, minimalist designers like Peir Wu and encouraging people to feel comfortable standing out.”

Alongside Wu, Stranger stocks Post Imperial, Adeju Thompson and U.Mi-1, crafting a distinctly edgy experience for the fashion enthusiast. But of growing commercial and creative influence are e-commerce platforms that are focused on African designers such as StyledByAfrica.com, Moon-look.com and Osengwa.com, some of which offer curated menswear collections that sit in the affordable luxury and high-end-of-the-high street price point.

Collectively, what these and other cosmopolitan menswear players highlight is that Africa has pluralistic voices and is home to varied design languages that go beyond tribal or other aesthetic clichés. Let there be no mistake: African menswear is no longer the remote, misunderstood exotic relative; but rather an integrated part of the global fashion family.

Disclosure: The author, Mazzi Odu, is the spouse of designer Kelechi Odu.