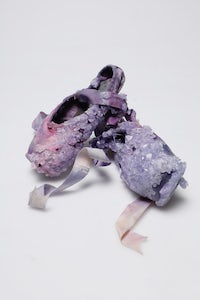 ATHENS, Greece — Starting tomorrow, visitors of the Onassis Cultural Centre in Athens will be able to enter a gym space and a rave dancefloor, where they are actively encouraged to run, cycle, dance, bond and — most importantly — sweat together.

This highly interactive, immersive exhibition is crucial to the work of 2018 Royal College of Art graduate Alice Potts, who, during her Master’s degree in collaboration with medical scientists at Imperial College, developed a method using human sweat to create crystal embellishments. The result is a range of visually striking garments, encrusted in unique zero-waste crystals, many pigmented with natural dyes such as pH-sensitive red cabbage.

Her research has since won over the support of leading fashion insiders, such as Zowie Broach, RCA’s head of fashion; Sarah Mower, chief critic of Vogue Runway and the British Fashion Council’s ambassador for emerging talent; Nick Knight, photographer and founder of Showstudio; and Machine-A founder and buying director Stavros Karelis, who curated her upcoming exhibition at the Onassis Stegi, as part of the Biennale Athens, one of the largest contemporary art exhibitions held every two years.

One of the most exciting breakthroughs in solving fashion’s addiction to waste are going to be made on this new frontier between aesthetics and biodesign.

Speaking to BoF, Mower said Potts caught her attention because “she is not using sweat for shock value [by simply] showing that she can convert something we think of as repulsive into something glorious to look at. It really sets her apart as a citizen of the new century.” She added on her personal Instagram that “one of the most exciting breakthroughs in solving fashion’s addiction to waste are going to be made on this new frontier between aesthetics and biodesign.”

"[Potts]' involvement in Onassis' ecosystem will not be just for the Biennale," added Afroditi Panagiotakou, director of culture at the Onassis Foundation, who discovered the designer at her graduate show in London. "We want to help her release her potential [as she works] on the nature and technology of the Athenian sweat." 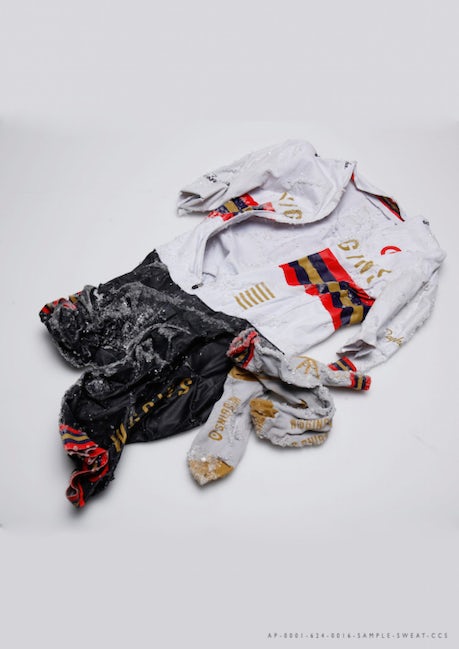 Smart materials, which are already being used in many industries from transportation to the military, can be broken into two key categories: aesthetic and performance-enhancing. From Uniqlo’s “Heattech” thermal wear range to Ralph Lauren’s “smart” tennis shirts that monitor the heart rate and stress levels of tennis players, fashion itself is no stranger to the latest advancements.

Major breakthroughs in fabric development first occurred in 1958, when Lycra hit the market, followed by Gore-tex, which disrupted the outdoor and performance-wear sector. Over the past few years, major apparel giants like Levi’s and Lululemon to designers like Iris Van Herpen have sourced or developed new technologies to create a new generational of materials that enhance the style, performance and sustainability of their products.

While the adoption of smart textiles in fashion is limited, Broach, also a mentor to Potts, believes it will play a more significant role, particularly given the emergence of the athleisure sector, which has led to a greater interest in performance materials. Smart fashion has also opened up a whole new conversation around clothing and sustainability. “[It’s important for] designers to connect to all pathways, specialisms, industries, philosophies and science, to find answers together,” she said.

Looking ahead, Potts hopes her research will not only encourage fashion designers to think of more sustainable and accessible approaches, but also transcend to medical science. “I think that Potts’ work is an evolving field with so much potential to explore [as we] re-evaluate our methods and take into consideration important causes such as sustainability and wellbeing,” said Karelis.

Potts is not alone in her mission. London-based designer Jen Keane, who previously held roles at Adidas in sourcing, material design and innovation, has developed a process for “microbial weaving,” where bacteria is used to grow nanocellulose — a light solid substance obtained from plant matter — to replicate the tensile strength of the fibres normally used in footwear. The result is an upper of a shoe made entirely from biodegradable material, held by one continuous yarn, with no sewing.

Meanwhile, Dutch artist Daan Roosegaarde has created smog-free rings, which the New York Times reports are gaining traction with couples looking for an affordable, eco-conscious symbol of their love. Aimed at purifying the air in cities around the world, the bespoke rings feature a stainless steel band set with a cube of compressed air pollution. Proceeds from the sale of each ring, which costs about $290, are allocated to building more smog-free towers.