NEW YORK, United States — There is no identifying signage outside Amazon Fashion’s photo studios in Williamsburg, Brooklyn. The facility is housed in a 40,000-square-foot former glass factory adjacent to the Wythe Hotel, a hip signifier of the former industrial neighborhood’s gentrified status. At 10am, teams of makeup artists, hair stylists, photographers and models have already begun filling the studio’s 28 bays. Thousands of garments are lined up on racks, while shoes and handbags are stacked high on shelves, all ready to be shot for Amazon’s e-commerce site.

Of the roughly 270 million customers with active accounts (defined as those who have made a purchase in the past 12 months), Amazon says about 40 million shop from the website’s fashion section. But 40 million is not enough. To fulfill the company’s long-term ambitions — chief executive Jeff Bezos aims to hit $200 billion in sales per year, significantly more than the $88.99 billion the company generated in 2014 — Amazon must ramp up its presence in two of the world’s largest markets: groceries and clothing. 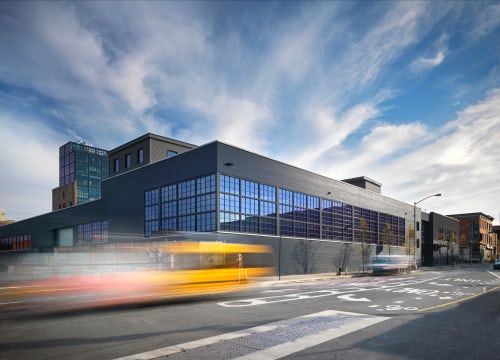 Fashion has particular appeal because Amazon’s costs are about the same no matter what it ships, meaning its gross profit per unit is much higher on high-margin fashion items than books, for example. But unlike books, electronics and personal care — Amazon’s top-selling categories, according to a May 2015 report from Cowen and Company — the e-commerce giant has yet to crack fashion. While women’s, men’s and children’s apparel are some of the e-tailer’s fastest growing product categories, Amazon is simply not the first place most people think of when it comes to buying clothing.

Over the past decade, Amazon has spent millions of dollars in order to expand its presence in fashion. In 2006, it paid an undisclosed price for Shopbop, a US-based contemporary fashion retailer that had early success online and has since expanded into the ready-to-wear market. In 2009, it acquired shoe e-tailer Zappos for a reported $850 million. And, in 2011, it launched MyHabit, Amazon’s answer to flash sales.

The company has also focused significant resources on growing Amazon.com’s own fashion section and, in 2009, hired Cathy Beaudoin to head the category on the site (as well as Shopbop). Beaudoin came off a seven-year run at Gap Inc., where she led the Piperlime launch. In 2012, she was named president of Amazon Fashion, which lives under the Amazon.com umbrella. “Our subsidiaries like Shopbop, MyHabit and Zappos offer a different proposition and provide more niche experiences and assortments, while Amazon is our largest store,” explains Beaudoin.

Beaudoin and her chief marketing officer, Jennie Perry — who came from Stride Right and, before that, Old Navy — briskly took to sponsoring fashion industry events, starting with the Met Ball in 2012, a move aimed at both end consumers and fashion brands. Indeed, one of Amazon’s biggest hurdles, as it aims to expand its fashion presence, is getting higher-end brands to agree to sell to a company that has historically traded on low prices and emphasised utility over merchandising and customer experience.

“From the outside, it looks like these [sponsorship] moves are mostly to try and gain credibility with brands,” says Liz Dunn, an analyst at Talmage Advisors. “[Amazon Fashion’s] long-term success is going to have do with whether or not they can get fashion brands to sell to them. Amazon is the low-price leader and price promotion is a big worry for brands. Amazon also has to convince brands that it’ll bring something more to the conversation than just great distribution. It needs to begin building online shopping environments that offer brands in an attractive light.” 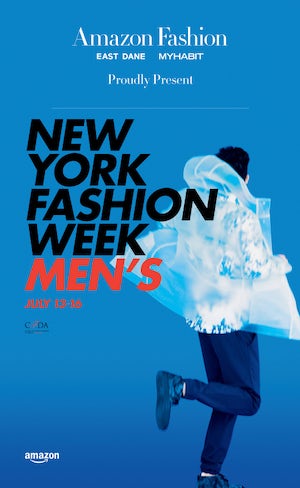 Amazon’s sponsorship of industry events is designed to position the company as a partner and a place where brands can feel comfortable selling their clothes. Now, the company’s three men’s fashion sites — Amazon Fashion, MyHabit and East Dane, the male answer to Shopbop — will sponsor New York’s first-ever men’s fashion week, which takes place from July 13 to July 16. On the first day of the event, Amazon will clear out its studio to throw the kick-off party for New York Fashion Week: Men’s, covering the walls of the space in the work of photographer Erik Madigan Heck, who has shot 16 looks from designers showing at the inaugural event, from Thom Browne to Tommy Hilfiger, most of which Amazon says it carries on at least one of its three men’s fashion destinations.

The seven-figure, two-season partnership between Amazon and the Council of Fashion Designers of America (CFDA), which is spearheading the event, is aimed, in part, at boosting Amazon’s potential in menswear. Men’s may be an easier sell than women’s, as men tend to favour the kind of convenience that Amazon offers. Roughly half of Amazon Fashion’s current business is men’s clothing and accessories . “It’s an investment on Amazon’s part,” says Steven Kolb, chief executive of the CFDA. “They’re not looking for an ROI overnight.” Amazon Fashion is typically approached about these sponsorships, not the other way around. “Our menswear business is important to us. Launching a dedicated fashion week that allows American menswear designers to align their shows with the buying schedule is smart,” said Beaudoin. “When we learned the CFDA needed our help, we were happy to give it.” Since 2012, Amazon Fashion has also advertised in high-fashion magazines, on billboards and taxis, but the success of these efforts is difficult to measure.

While the retailer remains underpenetrated in fashion, Amazon does have a few major advantages. The company has a vast database (and stored payment information) for hundreds of millions of consumers, as well as an unparalleled technology and logistics back-end. It also has a powerful algorithmic recommendations engine. “Traditional retailers have really been trying to crack the code, but they haven’t been able to just yet,” says Dunn. But the same algorithms that work so well to suggest new books don’t necessarily work for apparel and accessories. “If Amazon can successfully adapt its expertise, that will be a point of differentiation.”

It’s clear that Amazon must also upgrade its front-end experience, which is currently not optimised for merchandising fashion. The studio in Williamsburg, which opened in 2013, as well as a 46,000-square-foot space set to open in London, are part of the solution. “We felt that there was a huge opportunity to enhance our selection and enhance our site experience, presenting product in a way that’s really attractive to customers, recognising the importance of beauty,” says Perry, sitting in a conference room on the second floor of the company’s Williamsburg outpost. “We spent a lot of time investing in this facility, developing editorial and working closely with brands.”

“Many brands are surprised to understand that we operate like any other retailer,” says Perry. “We go to market, we have inventory, we buy product, we have buyers.” Amazon began its fashion offering with denim, recruiting companies like Levi’s and Hudson Jeans. Dresses, another big category seller, are presented as a dedicated shop-in-shop, with product pages featuring on-model photos and videos. And, as the Amazon Fashion brand has developed, the company has brought mid-priced labels like Lacoste, Rachel Zoe and Theory into the fold. So what about higher-end brands? Before the planned merger of Yoox and Net-a-Porter was announced, some market sources identified Amazon as a potential buyer of the London-based luxury e-tailer.

“There has been lot of speculation on us entering the luxury market and that is just not something that we’re focused on right now,” says Perry. “What we are focused on is developing an experience for our large customer base. That customer seems to have a great appetite for many things.”

Whether the company ultimately decides to target the luxury market or not, Amazon, a rare publicly traded company known for its patience and long-term thinking, is resolute in its ambitions to win in fashion and accessories. “We’re in it for the long haul,” Perry says. “We’re really invested in this industry.”

Editor’s Note: This article was revised on 30 June, 2015. Due to an editing error, an earlier version of this article incorrectly attributed a quote from Liz Dunn, an analyst at Talmage Advisors, to Andy Dunn, founder of Bonobos.

Editor’s Note: This article was revised on 1 July, 2015. An earlier version of this article misstated that Amazon had opened a 46,000-square-foot studio space in London. The space has not yet opened.