El Puerto de Liverpool, one of the first Mexican retailers to sell online, is quickly falling behind newer arrivals. Is it too late to catch up?

MEXICO CITY, Mexico — One of the first Mexican retailers to sell online is quickly falling behind newer arrivals, and it may be too late to catch up, according to Credit Suisse.

El Puerto de Liverpool, which conducted its first e-commerce transaction in 1997, is spending just a fraction of the amount as Amazon.com Inc., MercadoLibre Inc. and Wal-Mart de Mexico SAB on bolstering internet operations in Mexico. Instead, its shares have tumbled to a five-year low amid a focus on opening new brick-and-mortar stores at a record pace.

Liverpool, which traces its roots to a Mexico City clothing store set up in 1847, offers fewer products online than its peers do and many of its items can only be purchased in stores. Shipping is free but can take longer than five days when there’s high demand, compared with as little as one day for some Amazon orders. Perhaps most importantly, it doesn’t accept cash payments for online purchases, which cuts off a big chunk of the population in Mexico, where fewer than half of adults have credit cards.

“Liverpool’s business model is largely threatened,” Credit Suisse analysts led by Antonio Gonzalez wrote in a note this week. “Investors should no longer think about e-commerce in Mexico as a phenomenon that will impact stock prices in the distant future. The future for e-commerce is now.”

While online shopping only represents about 3 percent of retail sales in Mexico, analysts at HSBC predict it’s set to grow substantially after Amazon introduced its Prime membership club to Mexico earlier this year. A potential change to the North American Free Trade Agreement that would let Mexican consumers buy more online from the U.S. and Canada without having to pay tariffs could also lead to more cross-border e-commerce. 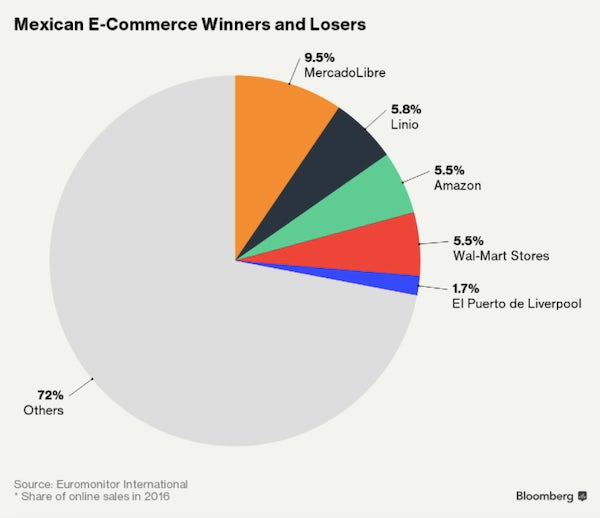 Liverpool shares have tumbled 17 percent this year. Walmex has gained 18 percent and Mexico’s benchmark stock gauge is up 3.7 percent.

Alejandra Tovar, a spokeswoman for Liverpool, didn’t immediately respond to a request for comment.

El Puerto de Liverpool is planning to open 11 stores this year, expanding floor space by 6 percent, according to its latest earnings report.

But it’s only invested about $30 million on e-commerce in Mexico during the past few years — the same amount that MercadoLibre has invested on free shipping in Mexico this year alone, according to Credit Suisse. Wal-Mart de Mexico has spent about $190 million on online efforts during the past two years, Credit Suisse says. Amazon, which entered Mexico in 2015, is planning to open a warehouse near Mexico City that would triple its distribution space, Reuters reported in September.

“Mercado Libre is investing at a pace that is simply not being followed by bricks-and-mortar players, which will create a permanent dislocation in market share,” Gonzalez wrote.