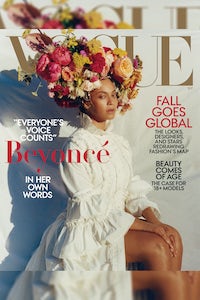 “I’m not going to address it, I’m not going to address it,” Wintour said, in response to the persistent rumblings of her imminent departure from her position as editor-in-chief of American Vogue and artistic director of Condé Nast during an interview with BoF in her office on the 25th floor of One World Trade. “I’ve never addressed [the rumours]. That is my point of view; respect it, please.” (Condé Nast chief executive Bob Sauerberg said Wintour will stay with the company “indefinitely” in a statement last week.)

But in the week before the release of her 30th September issue for American Vogue, which she has led since 1988, there was further speculation to address. Reports alleging that cover star Beyoncé Knowles had full editorial control over her feature spread like wildfire. Think pieces followed. Had Knowles single-handedly ushered in Vogue’s first ever African-American cover photographer?

“The concept and the photographer was entirely Vogue’s, specifically Raul’s,” said Wintour, who spoke to BoF with Condé Nast creative director Raul Martinez. He said he first became aware of the 23-year-old photographer Tyler Mitchell when he photographed gun control activists for a Teen Vogue digital cover in March, and then became more acquainted with his work at the photography studio and exhibition space Red Hook Labs through Jimmy Moffat, a mentor to the young photographer. 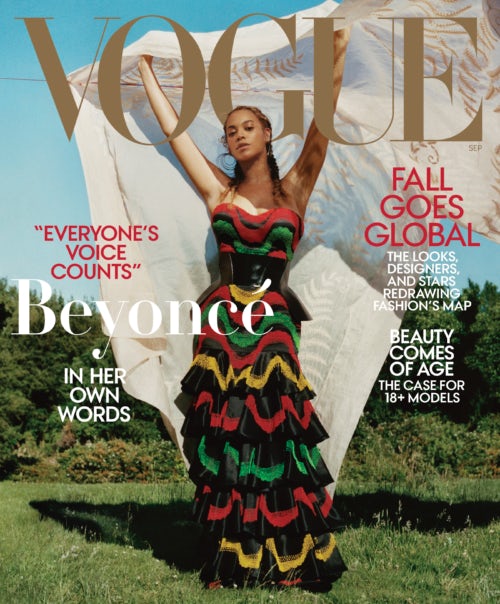 After being presented with options for photographers, Knowles immediately approved of Mitchell, recognising the historic implications of the choice. Mitchell was already known to Knowles’ record label Parkwood Entertainment, too, and had photographed her sister Solange Knowles.

Martinez said Beyoncé Knowles was thrilled with the choice. When he telephoned Mitchell to share the news, the young photographer thought it was a prank. His next thoughts were purely practical. “So when are we shooting?” Mitchell’s own family did not know about the project until the news leaked last week.

Anytime that Vogue puts a big star on the cover, Wintour considers it a collaboration. That is especially true for Knowles, who works with a tight-knit creative team to produce her cinematic live shows, music videos and red carpet appearances. She is a mega-star with an avid fandom and six times as many followers on Instagram as American Vogue, giving her significant clout (and mega-scale distribution of her own).

Arguably, the speculative headlines brought more buzz to the September issue than it has generated in years. But the assumption that the magazine ceded full control to a cover star (even one as big as Knowles) and wouldn’t have otherwise commissioned the young African-American photographer for a cover reflects a growing perception that Vogue is losing its touch on culture.

The magazine’s September issue, immortalised in the 2009 documentary of the same name, is a comically thick annual issue full of ads and now a major traffic driver for Vogue’s website and social media accounts. Landing the cover is a major milestone. The issue is also the title’s biggest money maker of the year, outselling every other month on the newsstands for at least the last 9 years, according to the Alliance for Audited Media, even as overall print sales have plummeted.

The 2018 edition also marks a milestone for the 126-year old magazine: its cover features the work of an African-American photographer for the first time.

Mitchell, who is profiled in the issue by Vogue.com's fashion news director Chioma Nnadi, is known for documenting youth culture, especially that of minorities, through clothes. It has lead to a steady stream of fashion editorial and advertising projects over the last two years. He said his images “seek to humanise the black experience in all its aspects as much as possible” and his work comes from an autobiographical point of view. 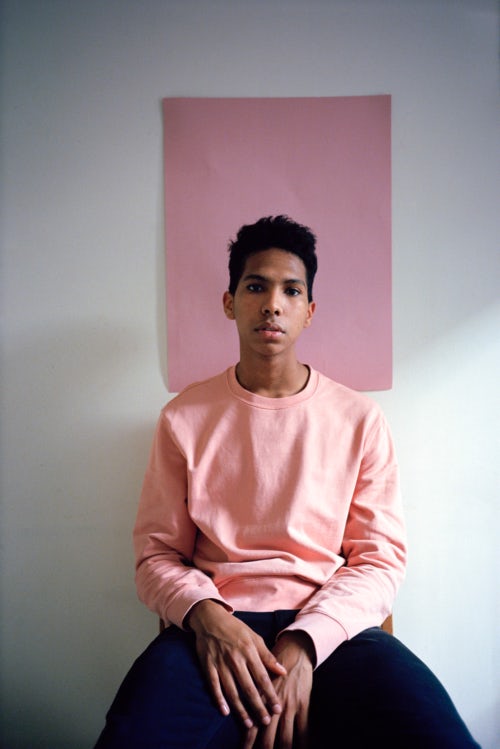 Mitchell also told BoF that the Vogue team made clear that they wanted him to stay true to his vision, telling him they didn’t want the shoot to feel overproduced.

“[Knowles] really pushes you to the creative limit,” said Mitchell. “A lot of the research was very cultural as well. How do we tie in references from the diaspora and what it means to be African American?”

Mitchell is part of a new generation of creatives working with Vogue in the wake of misconduct allegations against some of the magazine’s star photographers — Bruce Weber, Mario Testino and Patrick Demarchelier — who were accused of sexual harassment in articles published by the New York Times and the Boston Globe in early 2018. Condé Nast said it would not commission work from them for the foreseeable future.

But Vogue’s covers since have largely remained in the hands of more experienced photographers such as Mert Alas and Marcus Piggott, Annie Leibovitz and Inez and Vinoodh. For August, frequent contributor Jamie Hawkesworth made his American Vogue cover debut in an issue that also boasted the work of 33 new photographers, writers and models.

“I look at it as a great opportunity to bring in new talent and new names in all aspects of not only Vogue, but the company,” said Wintour.

While Vogue seems to have played its regular role in shaping the latest cover story, the feature does reflect a wider shift in power towards celebrities with larger followings than the magazines they cover. Indeed, Knowles is a media brand of her own.

For her last American Vogue cover in September 2015, she did not grant the magazine an accompanying interview. While that was an unusual concession for Vogue, the entertainer has avoided almost all interviews in the last five years without giving up media coverage — a testament to her outsized cultural influence. (Knowles was not available to speak to BoF.) For the text that accompanies the cover shoot in Vogue’s September issue, Knowles worked with writer Clover Hope, Jezebel's culture editor, to produce an “as told to” feature in her own words.

“As last time, and the time before, there was a lot of discussion about the best way to approach this,” explained Wintour. “Who is better to write about Beyoncé than Beyoncé?”

Knowles also had one of her creative directors, Kwasi Fordjour, on set in England for the shoot. He worked with Vogue fashion director Tonne Goodman, who recently announced a transition to a contributing role for the magazine.

If the collaboration appeared cozier than usual, the rationale seems clear. Knowles will surely bring millions of eyeballs to the fashion title during a challenging year for Condé Nast, which is streamlining its portfolio to cut costs and focus on tentpole brands such as Vogue.

“[Knowles] now plays the role of a public intellectual in America, she and her husband do,” said Sally Singer, Vogue’s creative digital director. “They have a much bigger mission when they put themselves forward…. All of those things will be taken up and discussed by her fans. We need to be on top of the conversation.”

In order to achieve that, Singer and Vogue.com digital director Anna-Lisa Yabsley have keyed up an even more involved version of what they do for every cover reveal: publish supplementary content on Vogue.com and its social media platforms in carefully timed phases in order to reach as many viewers as possibles. Most Knowles content will be published in the first week after the reveal, depending on how the reaction evolves. A video component will be released at an undefined future date.

“It’s about servicing our existing loyal audience while opening the world of Vogue to new audiences and exposing them to the plethora of what we do,” said Yabsley. “And then doing everything we can, obviously, to retain them and turn them into loyal followers.” 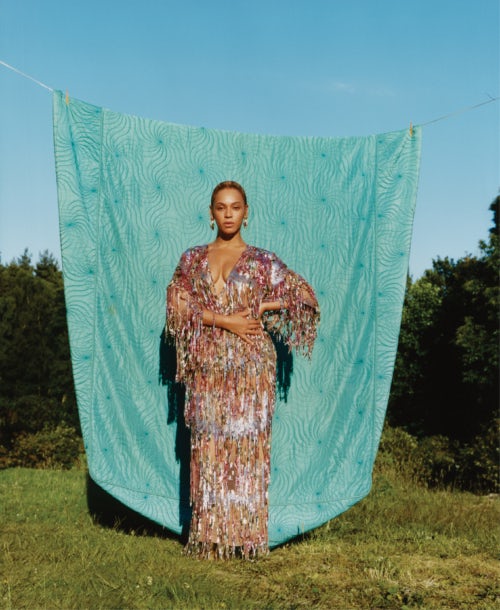 For Vogue’s chief business officer Susan Plagemann, the September issue is “an integral part of every strategy” for the media brand and part of every advertiser conversation. While this year’s issue did not outpace the revenue generated by last year’s anniversary edition, it did surpass internal targets by 10 percent, she said. The issue features over 30 new advertisers.

Condé Nast does not share revenue figures, but for a company that reportedly lost $120 million last year — according to a new report from the New York Times detailing its plans to sell W, Brides and Golf Digest — such a reliable print advertising revenue driver is key. When asked if the magazine is profitable (reportedly, the company overall is not) Plagemann would only say Vogue is a “really successful business.”

The September issue is increasingly more than a print issue commercially, too. Plagemann said that close to three-quarters of advertising partnerships around the issue have some kind of digital element, which can include a custom campaign, sponsored Instagram stories, pre-roll advertising on YouTube videos, branded content and more. (In the second quarter of 2018, Condé Nast's web and video revenue outgrew its print revenue for the first time.) And recently, more of Vogue's digital-only advertisers are making the investment in September print ads, where a single page can run for $208,000, according to its rate card.

Online, where Condé Nast is now pinning its hopes for survival, the September issue still has its cultural significance, said Singer, but younger audiences care less.

To that point, the release of Rihanna's June 2018 cover generated more mentions for Vogue online than any other event in the last year — including the September 2017 issue starring Jennifer Lawrence — according to social-media monitoring and analytics firm Brandwatch.

“Our digital audience is fast and some of them, I know, have never looked at a print issue of American Vogue,” said Singer. “I’m not sure, for the health of the brand, it necessarily matters the way it once did. I think for people online who really live digitally — all of those kinds of analogies to the physical world are going to start dropping away.” She said the audience wants narrative in all formats. “You have to deliver them the right story at the right time.”

This time, Vogue was part of the story too.

“To be honest, there is so much noise out there, that we are very focused on what we are doing and what we know the story is,” said Wintour. “People are always interested in the September issue, this one no more than any other.”

The issue revealed Monday will hit newsstands on August 14 in New York and Los Angeles, and nationwide the following week.

The Fashion World After Anna Wintour