Apple’s ‘Netflix for Magazines’ Getting a Chilly Reception

Apple is trying woo newspapers like the WSJ and NYT to join Texture, an app that offers unlimited access to about 200 magazines. But can the tech giant disrupt publishing like it disrupted music? 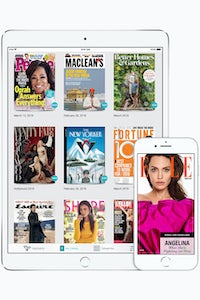 Apple’s ‘Netflix for Magazines’ Getting a Chilly Reception

Apple is trying woo newspapers like the WSJ and NYT to join Texture, an app that offers unlimited access to about 200 magazines. But can the tech giant disrupt publishing like it disrupted music?

“Sit down once a day and pray to thank Steve Jobs that he is saving the publishing industry,” the head of German publisher Axel Springer said about the tablet in 2010.

But the idea of paging through a magazine on an iPad never really caught on. Newspapers and magazines have continued to struggle. Subscriptions have dwindled for many publications, and ad revenue has shifted to the likes of Google and Facebook Inc.

Against that backdrop, Apple is back with another idea that it says will help rescue the industry — and getting a much cooler reception.

The tech giant is preparing to relaunch Texture, an app it agreed to buy in March that offers unlimited access to about 200 magazines. The company plans to make it a premium product within Apple News, which curates articles and comes preinstalled on iPhones, according to people familiar with the matter. A new version could be unveiled as soon as this coming spring, said the people, who asked not to be identified because the plans aren’t public.

Apple is trying woo newspapers like the Wall Street Journal and New York Times to join Texture and plans to refine its design, which currently creates an image of what magazines look like in print, the people said. The new approach is expected to look more like typical online news articles. Apple, based in Cupertino, California, declined to comment.

Some changes have already been revealed. Over the summer, Apple switched to a single price for the service, instead of its former two-tiered plan that charged $5 more for weeklies like the New Yorker.

The Texture reboot will test whether the all-you-can-eat subscription model popularised by Netflix Inc. and Spotify Technology SA can work for news. While startups such as Magzter and Zinio already sell unlimited access to magazines for $9.99 a month, Apple is working on a higher-profile endeavor. After all, it will be promoted on some of the world’s most valuable real estate: the screens of more than 1.3 billion devices.

But some executives fear Texture could end up doing more harm than good. Their concern is Apple could steal their current subscribers, who would save money by reading articles on Texture instead. At $9.99 a month, Texture would be cheaper than an unlimited digital subscription to the New York Times — after introductory prices expire.

While Apple has said it wants to support quality journalism, one publishing executive likens the situation to children who love a toy so much they break it.

I’d be careful if I were a newspaper because I’d really want to have a feel for how much revenue I might be giving up.

Steven Brill, a journalist and media entrepreneur, believes Apple could get newspapers on board by letting them incorporate their paywalls into the app.

“I’d be careful if I were a newspaper because I’d really want to have a feel for how much revenue I might be giving up,” he said.

Magazine ad sales are expected to drop more than 10 percent in 2018, according to Magna. The struggles have led to a wave of deals. Meredith Corp. acquired Time Inc. earlier this year, only to then put the company’s highest-profile magazines on the block. It agreed to sell Fortune to Thai businessman Chatchaval Jiaravanon for $150 million, while Salesforce.com Inc. founder Marc Benioff bought Time magazine for $190 million.

In recent months, Apple has met with media executives to address concerns that a new Texture could siphon off subscribers. A team led by Eddy Cue and former Condé Nast executive Liz Schimel has argued that Texture subscriber growth could generate enough revenue to exceed what media companies get from their own subscription businesses, one person said.

Apple executives have also compared the opportunity with Texture to their success with music. Since the company bought Beats Music in 2014 and used it as the basis for Apple Music the following year, the service has grown to more than 50 million subscribers.

The question now is whether Texture can achieve that kind of growth. The app had roughly 200,000 subscribers when Apple acquired it, a person familiar with the matter said. In 2015, the service paid out more than $15 million in revenue to publishers, which get compensated based on how much time readers spend with their articles.

“If marketed properly — and Apple tends to do a good job marketing — it could work,” Brill said. “But only as a supplement to revenue that quality magazines get online from readers anyway. It’s not going be a substitute for that.”

Joey Levin, chief executive officer of online media-company IAC, said publishers could benefit from a Netflix or Spotify model by aggregating readers and their payment information in one place. But publishers prefer to have direct relationships with readers, he said, rather than relying on a tech platform.

“In the long term, the platform becomes all powerful,” said Levin, whose company owns the Daily Beast website. “And nobody has monetised that in any meaningful way.”