NEW YORK, United States — At 4pm on Saturday, April 30, a small group of runners convened at an event space in the warehouse-heavy neighbourhood of Red Hook, Brooklyn, for a guided meditation session. The gathering preceded the Red Hook Crit 5K run, a circuit race that happens in tandem with the more famous high-speed bicycling competition of the same name.

The session was organised by Tom Daly and Max Vallot, who have spent the last two years developing the first line of products for their new label District Vision: made-in-Japan sunglasses specifically designed for running, which debuted in December 2015 and are sold at retailers including Dover Street Market and The Webster, as well as through the company’s own e-commerce platform. Daly and Vallot enlisted American photographer Chadwick Tyler to document the happening. 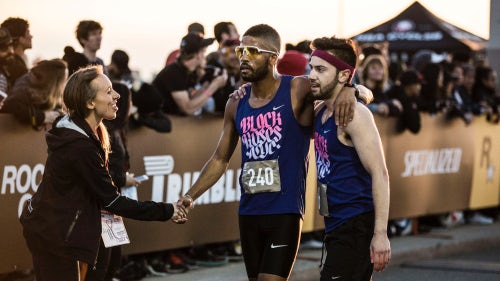 On the face of it, District Vision’s efforts to market its products with a meditation experience seem similar to the strategies being widely adopted across the sports and activewear space (see Nike’s running clubs and Lululemon’s yoga classes, which, ultimately, function as sophisticated marketing experiences driving sales of apparel and shoes).

But District Vision doesn’t see its running-and-meditation programme — which takes participants through a specific breathing sequence that allows runners to move and meditate at the same time — as a mere marketing tool. “What we’re developing is a product as well,” says Vallot, who plans to package and sell these techniques. Along with activities like the Red Hook Crit, District Vision is introducing people to its meditation-through-motion practice via in-person events with figures like the famous Indian yogi and author Sadhguru, as well as videos. “There’s a mental aspect of this and a physical aspect. I think we, as a niche brand in sports, have the ability to be a little bit more controversial with the mental aspect and play on that.”

The idea of staging a transformative experience, not only as marketing but as a product to be sold, is linked to the wider rise of the “Transformation Economy” as foreseen by B. Joseph Pine II and James H. Gilmore, who have long described product innovation in consumer markets as a multi-staged “progression of economic value” from commodities to goods to services to experiences to personal transformations, where a better you becomes the product. 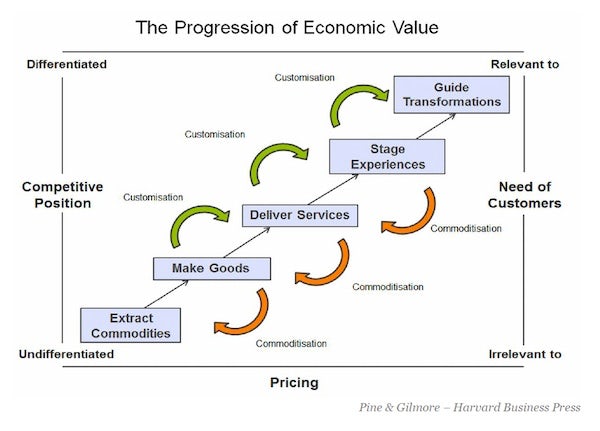 B. Joseph Pine II and James H. Gilmore describe product innovation in consumer markets as a five-staged “progression of economic value” from commodities to goods to services to experiences to transformations, such as yoga classes, where the customer undergoes a positive change. | Source: Pine & Gilmore

“When we buy experiences, those purchases make us happier than when we buy things,” says Pine, citing a 2014 Boston Consulting Group report which reveals that of the $1.8 trillion spent on “luxuries” in 2013, nearly $1 trillion, or 55 percent, was spent on luxury experiences. “Some large part of that trillion is luxury transformations: people looking to recharge, revitalise or to improve well-being in some way,” he continues.

The market for wellness tourism alone — which includes activities like yoga or meditation retreats — grew to $494 million in 2013, a 13 percent jump from the previous year, according to the Global Wellness Institute, a think tank. Fashionable studios like The Class and Sky Ting Yoga, both founded in New York City, regularly host retreats at prices equivalent to the cost of a luxury handbag.

On the West Coast of the US, “transformational festivals” are on the rise. Two years ago, a group of Burning Man veterans launched Further Future Festival, a high-end version of the annual gathering, which promises a desert weekend “filled with incredible music, visionary speakers, inspirational art and human connection.”

Brands must remember that consumers are looking to become better people.

“People really want to learn and tap into that ability to lead a better life,” explains Colleen Wachob, the chief branding officer of MindBodyGreen, a media property dedicated to health, wellness and lifestyle. Along with service journalism — which is written by a staff of editors as well as expert columnists — the publication offers paid online courses on everything from “beating inflammation” to the “art of detoxing.” It also hosts an annual “Revitalize” summit, where 250 influencers pay to hear from leaders in health, wellness and entrepreneurship.

Robyn Berkley, founder of New York-based activewear brand Live the Process, turned her personal passion for yoga, meditation and wellness into a clothing line, which also produces content and hosts transformative one-off events. “I want to be the brand that incorporates idealism into someone’s life,” Berkley says. “This conversation would not have happened four, or even two, years ago.”

Traditional luxury retailers are responding. In six of its stores (and online), Lane Crawford has developed a “Fit Room,” a year-long pop-up that features products from more than 70 brands aligned, in some way, with the Transformation Economy, from Live the Process leggings and District Vision sunglasses to Vitamix blenders, Fitbit fitness trackers and Technogym equipment. Along with in-store workouts and other events, the China-based department store is offering beauty touch-ups and a cold-press juice bar.

Similarly, in London, Selfridges has opened a “Body Studio,” which at 37,000 square feet, is the store’s largest department. (It’s a part of the Oxford Street location’s five-year, £300 million redevelopment.) The space features 150 brands in the lingerie, activewear and swim categories, with prices starting at £5 and topping off at £2,500. Selfridge’s e-commerce site and locations in Manchester and Birmingham also plan to crank up activewear- and innerwear-driven promotions. While Lane Crawford’s Fit Room is focused primarily on health-related products, Selfridges’ Body Studio is broader in scope, with a Daniel Galvin hair salon, a “Fit Studio” for bra fittings and, maybe most significantly, Hemsley + Hemsley at Selfridges, the first café concept from clean-living food bloggers Jasmine and Melissa Hemsley.

But are these retailers really productising transformations themselves? Or are they simply packaging a selection of goods under a timely thematic umbrella, bolstered by related activities that function more like marketing? Genuine transformations — though they may well drive sales of associated product — must come with a price tag of their own. “What turns something into an experience is when you charge for time,” Pine says. "An admission fee also sends a signal that this is an experience worth having.”

At multi-brand activewear retailer Bandier, classes at Studio B, a fitness studio in its 5th Avenue flagship are not free. Instead, the retailer brings in star instructors from studios across the city who each charge their normal fee. (Bandier takes a commission.) “For the instructors we work with, Studio B feels like their own studio without all of the operational burden and real estate expense,” says founder Jennifer Bandier. “We wanted to give some of our favourite fitness brands a platform for growth, as Bandier’s growth is tied to the vibrancy of the overall health, wellness and fitness community.” The company says that it has doubled its foot traffic since opening the studio and plans to introduce a similar concept in Los Angeles later this year. “We think about creating and curating experiences in a similar way to how we buy and merchandise our stores,” she says. “The experiences we create are part of our overall product offering.”

But while tapping the "Transformation Economy" may seem like a natural move for activewear brands, does it make sense for traditional fashion companies?

In some ways, fashion goods have always been transformative in their own right: they can certainly make someone more attractive and communicate social status. So it’s perhaps not that much of a stretch for fashion brands to start offering deeper transformations. “Brands must remember that consumers are looking to become better people,” Pine says. “If they’re buying physical goods, it’s to achieve aspirations, whatever they might be.”